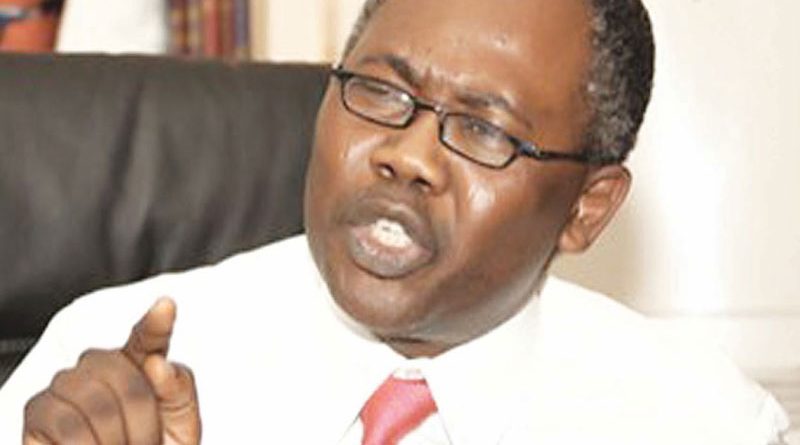 The federal government on Monday arraigned former Attorney-General of the Federation (AGF) and Minister of Justice, Mr Mohammed Adoke , on fresh  charges of money laundering.

The Economic and Crimes Commission (EFCC) is prosecuting Adoke and one Aliyu Abubakar on a 7 count criminal charge bordering on bribery and money laundering in the region of N900m.

They however pleaded not guilty to the seven counts read against them.

Following their not guilty plea to the charges, counsel for the  EFCC Bala Sanga, urged the court to remand the defendants in the commission’s custody pending the hearing of the matter.

Chief Mike Ozekhome (SAN), who argued the bail application of Adoke, prayed the court to grant Adoke bail on self recognizance being a former AGF, pending the hearing of the charges.

He said in the alternative, Adoke should be granted bail on favourable and liberal terms, or better still to allow Adoke enjoy  bail terms as already granted him by an FCT High Court presided over by Justice Abubakar Idris Kutigi, where Adoke is facing a 42-count charge.

He said Adoke had never been convicted of any crime and that the charges before the court were bailable offences.

While submitting that bail is constitutional, the senior lawyer said a defendant should not be denied his right of freedom of free movement until when he is convicted.

In his response, prosecution counsel, Bala Sanga, urged the court to use its discretionary power to grant the defendants bail.

Delivering ruling on the bail applications, Justice Nyako however admitted the defendants to bail in the same terms granted them earlier by Justice Kutigi.

Recall that Justice Kutigi had admitted both Adoke and Abubakar to bail in the sum of N50m each.

The court in addition ordered them to provide a surety each in like sum.

The sureties who must be responsible citizens of Nigeria, must reside within the jurisdiction of the court.

They must be owners of verifiable properties in the Federal Capital Territory (FCT) and also show evidence of tax payment in the last three years.

In addition the sureties are to sign an undertaking that the defendants will always be in court at every proceedings of the trial, while the defendants on their part are to undertake that they will not jump bail nor interfere with the trial.

The defendants were also ordered to submit their international passport to the court and cannot travel without the court’s permission.

Justice Kutigi also ordered that the defendants be kept in custody of the EFCC pending the perfection of their bail.

Though as revealed by Adoke’s counsel, Chief Ozekhome SAN, the defendants were yet to be released even after perfecting their bail.

However, Justice Nyako has adjourned till April 1 and 2 for commencement of trial.

The charges read in part:

“That you Mohammed Bello Adoke, sometime in September 2013, in Abuja, within the jurisdiction of this Honourable Court, accepted as payment the sum of United States Dollars equivalent to N300m from Abubakar Aliyu and you thereby committed an offence as specified under section 1 (a) of the Money Laundering Prohibition Act 2011 (as amended) and punishable under section 16 (2)(b) of the same Act.

“That you Mohammed Bello Adoke, sometime in September 2013, in Abuja, within the jurisdiction of this Honourable Court, made a payment of a sum of United States Dollars equivalent to N367.3 million to one Usman Mohammed Bello and you thereby committed an offence as specified under section 1(a) of the Money Laundering Prohibition Act 2011 (as amended) and punishable under section 16 (2)(b) of the same Act.

“That you Mohammed Bello Adoke, sometime in September 2013, in Abuja within the jurisdiction of the Honourable Court, used the total sum of N300 million when you knew that the said funds formed part of your unlawful activities to wit: payment of an amount exceeding stated threshold amounts outside a financial Institution and you thereby committed an offence contrary to section 15 (2) (d) and punishable under section 15 (3) of the Money Laundering (Prohibition) Act 2011 (as amended).

“That you Mohammed Bello Adoke on or about the 13th of September 2013, in Abuja, within the jurisdiction of this Honourable Court, did cause to be made a structured cash payment in 13 tranches of a sum of money totaling N50 million into your Unity Bank Plc Account No. 0020153263, which sums you knew is part of an unlawful act, to wit: the payment of an amount exceeding stated threshold amounts outside a financial Institution, intending to conceal the origins of the said funds, contrary to section 15 (2 )(a) of the Money Laundering Prohibition Act 2011 as amended and punishable under section 15 (3) of the same Act.