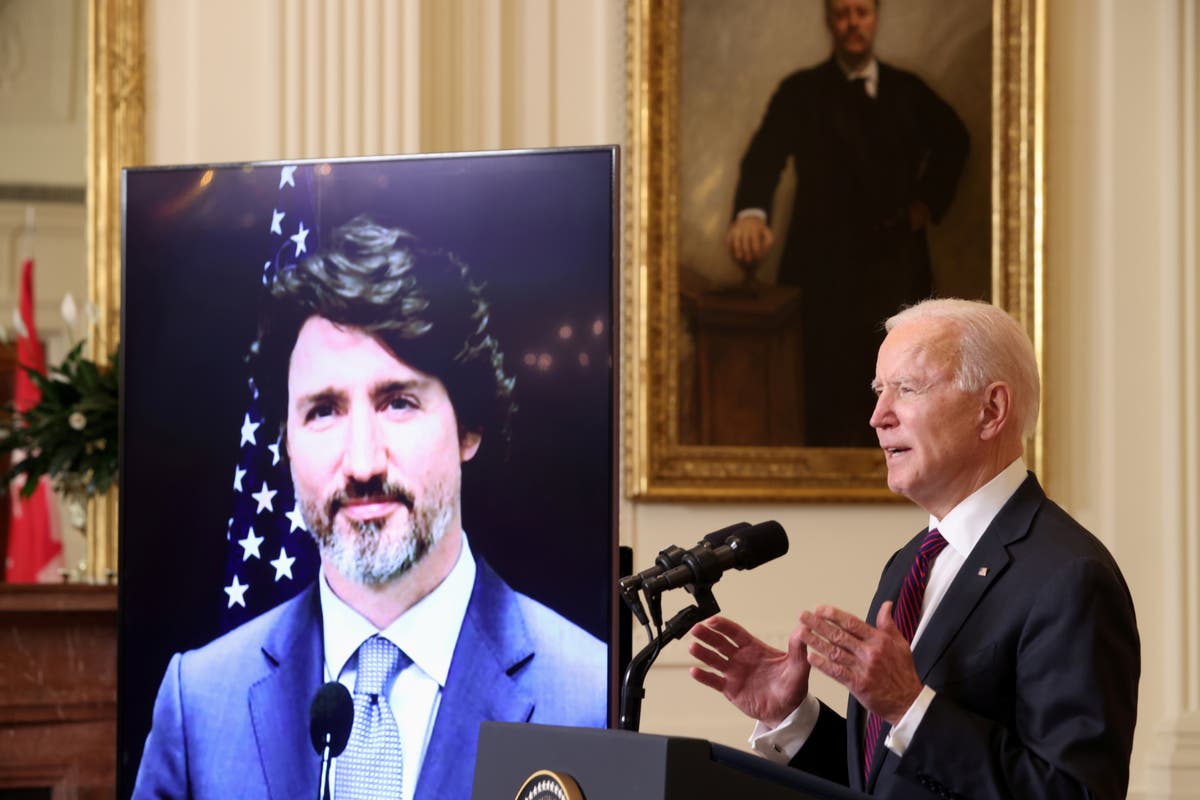 Alexandria Ocasio-Cortez has strongly criticised the Biden administration after reports they are reopening a child migration detention facility in Texas, as Mitt Romney claims Donald Trump would easily win the 2024 GOP nomination.

Mr Biden has previously called the child camps on the US-Mexico border “horrific” and promised during his 2020 election campaign to end the use of the facilities, but The Washington Post reported that the child detention centre in Texas is being reopened due capacity at other facilities due to Covid.

Taking to Twitter AOC said: “This is not okay, never has been okay, never will be okay – no matter the administration or party.”

It comes as Senator Mitt Romney has predicted that Donald Trump would win the 2024 presidential nomination for the Republican party, if he chose to run.

Speaking with the New York Times’s DealBook DC Policy Project, he said: “I don’t know if he’ll run in 2024 or not, but if he does, I’m pretty sure he will win the nomination.”

Meanwhile, Senators on Tuesday heard harrowing testimonies from top security officials as they probe the law enforcement failures that allowed a mob of Trump supporters to storm the Capitol building on January 6.

President Biden has taken aim at his predecessor’s infamous claim that injecting bleach could be considered as a treatment for Covid-19.

“I think there’s a growing awareness that, you know, injecting bleach into your system doesn’t do it for you,” the Democrat said.

Joe Biden has a briefing this morning from his Covid response team where he is sure to be encouraged by the boost in vaccine supply (see post below) after pharmaceutical leaders notified Congress on Tuesday they were significantly increasing the delivery of doses.

This afternoon Mr Biden is expected to sign an executive order to review US supply chains for large-capacity batteries, pharmaceuticals, critical minerals and semiconductors that power cars, phones, military equipment and other goods.

Over the past year, the fragility of vital supply chains has been revealed repeatedly after the coronavirus outbreak led to an initial shortage of masks, gloves and other protective medical equipment.

Automakers in the United States and Europe are now dealing with a shortage of computer chips.

The Biden administration hopes to address these supply issues with the planned 100-day review and the possibility of increased domestic production, according to officials who spokes to Associated Press.

Covid-19 vaccine makers told Congress on Tuesday to expect a sharp increase in the delivery of doses, fuelling optimism that there will be enough to get most Americans inoculated by the summer.

By the end of March, Pfizer and Moderna expect to have provided a total of 220 million vaccine doses, up sharply from the roughly 75 million shipped so far.

“We do believe we’re on track,” Moderna President Stephen Hoge said, outlining ways the company has ramped up production. “We think we’re at a very good spot.”

Johnson & Johnson’s vaccine, is expected to get a green light from regulators soon and would boost supplies of Covid jabs being rolled out across states.

Looking ahead to summer, Pfizer and Moderna expect to complete delivery of 300 million doses each, and J&J aims to provide an additional 100 million doses.

That would be more than enough to vaccinate every American adult, the goal set by the Biden administration.

Former vice-president Mike Pence has said he still has a close relationship with ex-president Trump amid widespread reports of a rift between the pair stemming from the events at the US Capitol on January 6.

Mr Pence reportedly made the comments to a group of conservative lawmakers on Tuesday, along with remarks that he intends to launch a political group, as reported by CNN.

Rep. Jim Banks, who was in the meeting, told the network: “He spoke very favorably about his relationship with President Trump.

“I got the sense they speak often and maintain the same personal friendship and relationship now that they have for four years.”

Mr Banks also said Mr Pence will be launching an organisation to defend the record of the Trump administration.

On Tuesday President Biden met with Canadian PM Justin Trudeau as they sought to repair relations that became increasingly fraught during Donald Trump’s time in office.

One area they agreed the countries should “double down” on was addressing the climate change crisis, with both leaders agreeing to meet a goal of net zero carbon emissions within the next few decades.

Alex Woodward has the details.

Biden proposed the 100-day pause on deportations during his campaign as part of a larger review of immigration enforcement and an attempt to reverse the priorities of former President Donald Trump.

The president has proposed a sweeping immigration bill that would allow the legalization of an estimated 11 million people living in the US illegally.

He has also instituted other guidelines on whom immigration and border agents should target for enforcement.

Tipton, a Trump appointee, initially ruled on January 26 that the moratorium violated federal law on administrative procedure and that the US failed to show why a deportation pause was justified.

President Joe Biden is set to call Saudi Arabia’s King Salman ahead of the public release of an intelligence report about the killing of Saudi journalist Jamal Khashoggi, US media reports said on Tuesday.

The call will be the first between the two leaders since Mr Biden entered the White House in January, and while the two are expected to discuss a range of issues the matter of the Khashoggi report is expected to feature prominently, writes The Independent’s Stuti Mishra.

In other major US news today, the New York police officers involved in the death of unarmed Black man Daniel Prude last year will not face any criminal charges, the state’s attorney general announced on Tuesday.

Officers restrained Prude and put a mesh “spit hood” over his head while holding him down during his arrest in March, with his death sparking a wave of outrage and protests in Rochester, New York.

‘This is not okay’

Alexandria Ocasio-Cortez has joined the mounting backlash against president Joe Biden over recent reports that his administration is reopening a child migration detention facility in Texas.

The New York Democrat said such a measure “is not okay, never has been okay, never will be okay – no matter the administration or party”.

It isn’t the first time AOC has refused to mince words when asked her opinion of Biden, figures on either side of the wide progressive-moderate divide in the party.