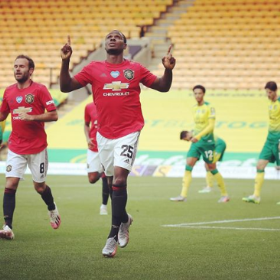 Top Four Best Performing Nigerian Players Of The Weekend In Europe, Including Ighalo And Victor Moses There was plenty of action last weekend across European leagues and Cup competitions and the performances of a few Nigerian players caught the eye.

Manchester United reached the semifinals of the FA Cup in England and former Super Eagles striker Odion Ighalo scored the Red Devils’ first goal in their 2-1 win over Norwich City at the Carrow Road.

Ighalo profited from a Luke Shaw effort to steer the ball past Tim Krul in goal for the Canaries.

Ighalo scored a brace in the 5th round of the competition against Derby County in March ensuring he has kept his goal scoring streak in Cup competitions for his loan club. 8.5/10.

Villarreal’s Samuel Chukwueze was instrumental in Villarreal’s first goal with a key pass in the 2-0 win at home against Valencia scored by former Valencia striker Paco Alcacer in the 14th minute.

Former Super Eagles forward Victor Moses came off the bench in place of Antonio Candreva in Inter Milan’s 2-1 away win over Parma on Sunday.

The Nigerian’s impact was massive as he assisted the 87th minute winner scored by Alessandro Bastoni with a brilliant turn and a cross. He was however yellow carded before the final whistle went.

Moses drew the ire of striker Romelu Lukaku whom he failed to gift a pass that could have widened the final score to a respectable 3-1.

Manager Antonio Conte was also animated on the bench at the decision of Moses  7/10.

Torino were defeated 4-2 away to Cagliari but Super Eagles right back Ola Aina was one of the better players on the part of Torino as he assisted Gleison Bremer’s 60th minute goal with a header onto the path of the Brazilian defender.

Aina who is likely to be transfer listed by his club this summer was substituted off by Ivorian defender Wilfried Singo. 7/10.