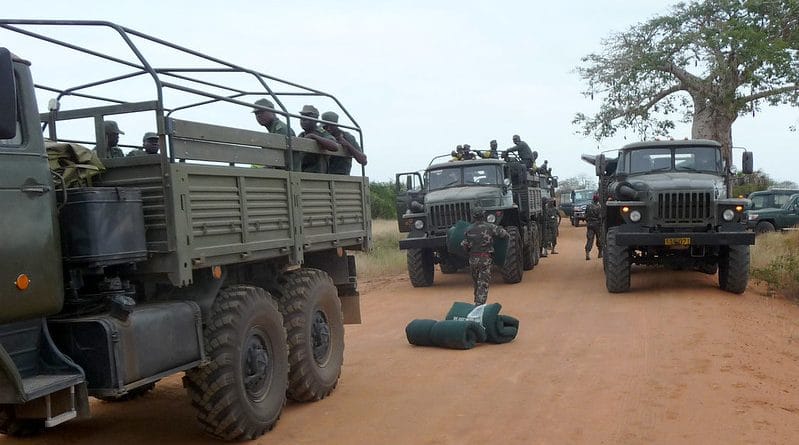 The Chadian government, a member of the MNJTF, have consistently pushed through the line and declared war against the Boko Haram and (ISWAP)The Islamic states west Africa province terrorist Group, has given the Niger republic and Nigerian troops an ultimatum of April 22 to reoccupy the territories that are already captured and seized from the Boko Haram insurgents.

Partly because it will withdraw its troops from those places on that date. Idriss Deby, the Chadian president, said his troops would move out of those captured areas if the two countries fail to mobilize and move their forces to take over the base seized from Bokoharam by April 22.

In an interview, president Deby made it clear that his troops released against the jihadist militants in lake chad and the Sahel region will not take part in operation outside of their national borders.

In his exact words, gallant Chadian soldiers have died for chad and the rest of the regions. And as from this day, we will no longer take part in any military operation that is outside the Chadian borders, and he told national television in Arabic. On Friday, the president’s remarks were broadcasted in French.

The president’s statements reveal and depicted a crack in the joint force, which was the result of poor or lack of commitment to the war against the insurgents by neighboring coalition countries.

Derby had severely led his troops on the counter-attack and decimated more than a thousand Boko Haram fighters, which prompted their leader, Abubakar Shakau, to appeal to his fighters never to give in to the onslaught by the Chadians soldiers.

The chad armed forces made it know that they had wrapped up their operation against the jihadist, especially in the lake chad region, as 52 soldiers have lost their lives and thousands of the insurgents killed.

The special operation started after 98 soldiers lost their lives in the recent Boko Haram raid at Bohoma base in lake’s marshlands on March 23. That was the most significant loss of the Chaldean forces in the history of the nation.

It can be recalled that four countries sharing borders with the lake (Nigeria, Cameroon and Chad, Benin Republic and Niger had in 2015 set up MNJTF- to deal decisively with Boko Haram insurgency but the Chadians who had some of the strongest men in the same region where frustrated with actions of the MNJTF after the losses in Bohoma.

In his address, Idriss lamented that Chad had been shouldering the battle against Boko Haram alone. On a public note, Deby announced the end of the deadly jihadist group and it’s offensive push on the Chadian soil and had moved deep into Nigeria and Niger Republic.

He said that his dad issued warnings to neighboring countries that its soldiers will move out of those bases captured from the Boko Haram groups on April 22, 2020, whether those soldiers moved in or not.

The army spokesperson, col. Azem Bermendoa made it know to the AFP news agency that 52 of their gallant men died during the operation when it started on match 31

In his words- a thousand jihadists have been killed, and 50 canoes have been destroyed,” the colonel said.

He added that the operation which kicked off after almost a hundred soldiers died in an attack last month came to an end on Wednesday when the jihadist fighters were forced out of the Chaldean borders.

As events unfold between the armed fighters, Nigeria, Niger, and chad, derby ‘s reaction and statements sparked off a furry in the Nigerian defense circle. The Nigerian defense headquarters made it clear on Tuesday that chad would not take all glory of the Nigerian gallantry efforts and contribution to the fight against the terrorist group.

Major General Enenche John, the coordinator of media operations, said that Nigeria is also pushing hard on the war against the Boko Haram as against the claims of president Derby.

Enenche added, saying Nigeria is lagging and slowing the terrorist war is false, for the Chadian president to say that is not valid.

Enenche brought to mind the efforts of the Nigerian troops in Sierra Leone and other African countries and built for itself a legacy of the restoration of peace and democratic rule.

Today- somebody is taking glory with 30 soldiers. When the battle is almost finished and victory almost won, others want to come and take the glory for themselves, forgetting how much struggle we have put in there.

Before this, the spokesperson to the Nigerian soldiers, colonial Musa Sagir, issued a brief statement on Friday debunking the false claim that foreign troops were taking hold of the Nigerian territory.

The statement adds that for clarity, the Bohoma operation by Boko haram was carried out on the Chaldean soil, not in Nigerian territories; therefore, as we speak, there is no territory or Nigerian base held right now by the chad troops waiting to be hand over to the Nigeria troops.

He added that the Nigerian army is fully ready and committed to its support and cooperation between Chad, Cameroon, and Niger to decimate any terrorist group finally and put a full stop to terrorism in the affected regions and Africa at large.