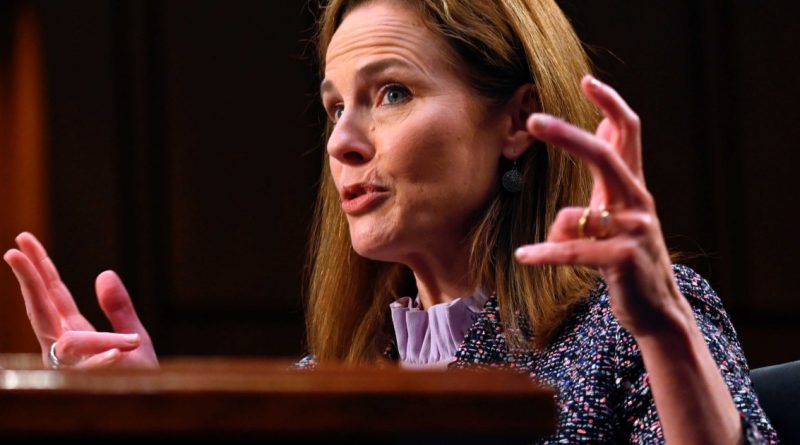 To a non-American, this may have seemed like a useless exercise, given that the Republicans hold a 57-43 majority over the Democrats in the Senate, so Barrett’s confirmation is sure to sail through.

Also, historically, the Senate has rarely rejected a president’s Supreme Court nominee. The last time this happened was in 1987, when the Democratic-controlled Senate refused to confirm Republican President Ronald Regan’s nomination of Robert H Bork for his conservative judicial opinions on key issues ranging from civil rights to abortion.

Given these hearings have a predetermined outcome, they often turn into political theatre of sorts. But this does not mean they are not important.

One of the most contentious aspects of Barrett’s confirmation hearings was their timing. President Trump decided to push forward with the nomination just days after the death of Supreme Court Justice Ruth Bader Ginsburg in September. The hearings were scheduled just weeks before the US elections, amidst a public health emergency and COVID-19 outbreaks in the White House and Congress.

Democrats decried the fact that the Senate was spending time on this confirmation process rather than passing a COVID-19 economic relief package, while also putting people in danger by gathering individuals in one room to conduct the hearings. This, many argued, unnecessarily exposed Senators and others to potential COVID-19 contamination.

There are two main reasons why the Republicans are rushing.

First, the Supreme Court is set to adjudicate a case on the Affordable Care Act (ACA) – President Barack Obama’s major domestic policy achievement that reformed the healthcare system and expanded health insurance coverage – and both Trump and the Republicans are counting on Barrett to help overturn it.

Second, it is looking more and more likely Democratic challenger Joe Biden will defeat Trump in the upcoming elections, while Republicans may lose control of the Senate. Solidifying a conservative majority by confirming three Supreme Court nominations by the incumbent Republican president represents a solid victory for the Republican party, one that could outlast a Democrat-controlled presidency and congress.

But by pushing forward with these rushed hearings, Republicans are going against their own past practices. When President Obama had the opportunity to nominate a Supreme Court judge prior to the 2016 presidential election, Senate Republicans refused to hold any hearings and insisted the process should be delayed until after Americans voted. This time, when it is in their political interest to rush a nomination ahead of the polls, they seem to have no qualms about doing it.

Democrats on the committee, for their part, are using the hearings not just to grill Bennett on important political issues that she will have to decide on as a Supreme Court justice, but also to appeal to voters. Democrats, including vice-presidential candidate Kamala Harris, used their allotted time to articulate why these hearings are problematic and how they reflect the failed leadership of President Trump and the Republican Party.

Barrett gave little information about how she would rule on flashpoint issues in American politics today, such as abortion, the Affordable Care Act (Obamacare), gun rights cases, and legal disputes that could arise in the upcoming presidential election. She was asked about her personal views, which she masterfully avoided answering. She did, however, clearly describe her judicial philosophy, known as originalism. When asked to describe this concept she said the following:

“I interpret the Constitution as a law, that I interpret its text as text and I understand it to have the meaning that it had at the time people ratified it. So that meaning doesn’t change over time. And it’s not up to me to update it or infuse my own policy views into it.”

This judicial philosophy, adopted by conservative judges reflects a very narrow view of the rights that emanate from the US constitution. It limits them to what is mentioned in the text and avoids interpretations that could ensure a plethora of rights that are not directly delineated or established by unchallenged legal precedent (known as “super precedent”).

The US constitution was drafted in 1787, and the last amendment was added in 1992. It is a living, breathing body of legal principles that more progressive judges interpret more liberally to better apply them to modern society and challenges, known as non-originalism.

Judges that follow an originalist judicial philosophy are less likely to ensure a right to affordable healthcare or a woman’s right to have an abortion, for example, and are more likely to reaffirm the rights of gun owners, upholding the provisions of the second amendment of the constitution (the right to bear arms).

Barrett clerked for one of the most conservative Supreme Court judges in US history, Antonin Scalia, whom she sees as a role model. As a Federal Appeals court judge, she issued several conservative rulings, and as an academic at Notre Dame Law School, she voiced her conservative legal philosophy in various publications.

This means there is a strong possibility of her supporting decisions that could overturn legal precedents like the 1973 ruling in the Roe v Wade case, which established that the constitution protects a woman’s right to abortion.

Barrett’s views on the ACA are also known. She critiqued Chief Justice John Robert’s 2012 decision to uphold key parts of the ACA, arguing he interpreted the law “beyond its plausible meaning to save the statute”. The Supreme Court has agreed to hear the Trump administration-backed lawsuit against the ACA one week after the election. Trump’s two other Supreme Court nominees, Neil Gorsuch and Brett Kavanaugh, will almost certainly vote in favour of striking down the law.

Although initially there was public opposition to Barrett’s confirmation ahead of the elections, some American voters seem to be warming up to her. Some new polling reveals that 48 percent of voters want her confirmed, 31 do not, and 21 percent are undecided.

Democrats can do little to prevent the confirmation of Barrett, but their use of the hearing to address US voters may have given Biden and Democratic congressional candidates a boost. Mid-October polls show that Biden’s lead over Trump continues to rise.

Three Senate Republicans on the Judiciary Committee are also facing significant re-election challengers, including the committee chairman Senator Lindsey Graham of South Carolina, Joni Ernst in Iowa, and Thom Tillis in North Carolina. The hearings could affect their chances of re-election.

The hearings also helped mobilise grassroots women’s rights organisations. Over the weekend, thousands protested Barrett’s nomination in Washington, DC and other American cities across all 50 states.

A Democratic-controlled White House, Senate, and House of Representatives would be a powerful buffer against a conservative Supreme Court. One thing Democrats can do, at least in theory, is add justices to the Supreme Court to overturn the conservative majority. The constitution does not specify a certain number of Supreme Court justices. The practice of having nine seats was decided on by Congress in 1869 and has not been changed ever since.

If Democrats control both the House and the Senate, they can pass new legislation to overturn this decision. Past attempts to do this have failed, as public opinion tends not to support such a move. However, we live in a new era, where US politics is unpredictable. And as the Senate’s top Democrat Chuck Schumer has said, “Everything is on the table.”