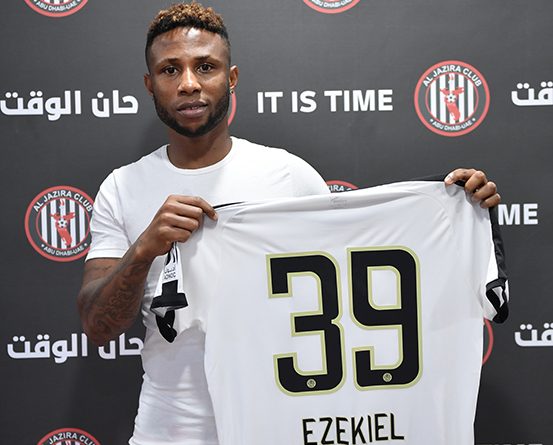 Al Jazira announced Ezekiel’s signing in a statement on their website on Sunday.

“Al Jazira Club have signed forward Imoh Ezekiel, with the Nigerian international joining the club ahead of the 2020-21 Arabian Gulf League campaign.

“The 26-year old arrives at the Abu Dhabi club following a career that has seen him play across European top-flight leagues as well as having experience of football in the Middle East.

“Ezekiel, who can play in a number of attacking positions began his career in Belgium with a successful stint at Standard Liege as well as playing for European giants Anderlecht.

“He has also enjoyed spells in Spain and spent three years of his early career in the Middle East between 2014-2017.”

Commenting on Ezekiel’s signing, Al Jazira’s Sporting Director Mads Davidsen said: “Imoh’s experience of the region and across Europe is a huge boost for Marcel and the team, with him playing for top clubs and against tough opposition.

“His style of play offers a new dimension to the way in which Marcel wants the team play and Ezekiel can play in a number of positions. In a football team you need different skills and we have a lot of good combination players and Imoh is a clever deep runner and can really help us adding this dimension to the offensive part of our game.”

And speaking on joining Al Jazira, Ezekiel, said: “To join a club of Al Jazira’s statue is something which really excites me. When I was speaking with Mads and the head coach, they told me their ambition for the club and I can’t wait to get excited for the season, as soon as I arrived at the stadium, I see the Pride of Abu Dhabi, so it is special to be part of this.

“I know the league well and have watched a lot of football in the Middle East so it is great to be part of this club and in a region that is so passionate about football.”

Born in Lagos, Nigeria, Ezekiel received his first call-up to the Super Eagles in February 2014 and earned his first senior cap on 6 March, in the 0–0 draw with Mexico in a friendly match after coming on as a second-half substitute for Victor Moses.

He was a member of the U-23 Eagles that won bronze in the football event at the 2016 Rio Olympic games.