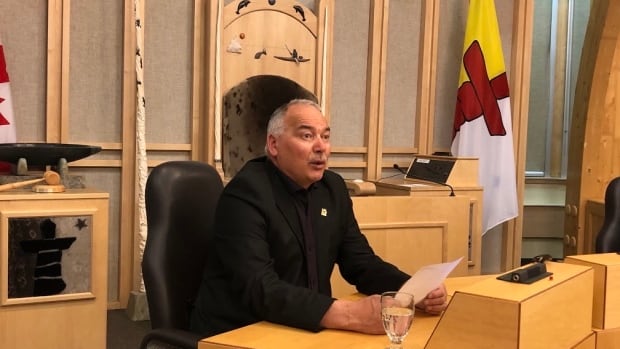 Elders will be first to get a COVID-19 vaccine in the early new year, Nunavut officials said during an update on the territory’s COVID-19 situation on Friday.

After elders and other priority groups, like front line workers and staff in long term care homes, all eligible Nunavummiut over the age of 18 will be able to get vaccinated, said Chief Public Health Officer Dr. Michael Patterson.

He made the announcement during a live news conference at the Legislative Assembly  on Friday morning and said priority groups are being identified nationally.

Delivery for the Moderna vaccine will begin as soon as it is approved by Health Canada, he said. Currently the Pfizer vaccine has been approved federally, but due to logistical challenges associated with distribution, the Prime Minister said it’s not likely going to the territories any time soon.

The North lacks the freezers required to store the Pfizer vaccine, which the company says requires a freezer at –80 C to –60 C or in a thermal container at –90 C to –60 C. Meanwhile, Moderna says its vaccine can survive a month in the fridge and can be stored for months at regular freezer temperatures of -20 C.

Premier Joe Savikataaq said the government is still working on a vaccine rollout plan, but said all “logistics” will be sorted out before the vaccine arrives.

Savikataaq said the federal government has promised that the three territories will receive enough vaccines to cover 75 per cent of their populations in the first quarter of the new year. Savikataaq also said the territory will have storage for vaccines in all of the communities.

“We need to stay apart this holiday so we have a chance to come together next Chirstmas,” he said.

On Friday, 16 new cases were reported in Arviat, where the community now has 56 active COVID-19 cases, the only active cases in the territory currently. Nunavut has seen a total of 245 cases of the virus with 189 people who have recovered as of Friday.

“No new cases today does not mean it’s an opportunity to relax,” Patterson said in a news release Thursday.

A finished rollout plan will include public education about the vaccine and information about where to get the vaccine, when to get a second dose and what any side effects will be.

Both the Pfizer-BioNTech and Moderna vaccines require two doses, received at a minimum of 21 days apart. The doses are typically given 28 days apart.

If someone gets the first dose of a vaccine in the South and comes back to Nunavut, they will have to restart the process if they received a Pfizer dosage, or if a first Moderna dose was given more than a month earlier.

Patterson recommended having both doses in the same region. He said he is confident that 75 per cent of adults will want to get the vaccine.

Missed the update? Watch it here:

The vaccine won’t mean that a 14-day isolation requirement will be ended for Nunavummiut returning home from other regions.

“We don’t know enough about any of these vaccines,” Patterson said. “We know they protect from hospitalization.”

“Some vaccines protect you from the worst effects,” he said, while other vaccines stop people from getting sick at all, and can be used to stop an outbreak altogether. He added that information isn’t available yet for the new vaccine.

But, Patterson did announce a change in isolation requirements for some medical travellers.

Select patients going out of territory for medical appointments will be able to come home in as few as seven days if they stay at the isolation hotels and follow all the rules.

This means wearing a mask, only going out for appointments and using provided government travel, Patterson said. Only patients identified by Health staff will be allowed in this shortened travel program.

So far around 10 patients have been in this medical travel program since it started in November, Patterson said.

“If you would listen for two weeks this would all go away, this is so preventable, just listen,” Minister Lorne Kusugak said. “This is very serious, please stop visiting, please stop allowing visitors.”

During Monday’s government announcement, Patterson said Nunavut is beginning rapid-testing in its southern isolation hubs in Winnipeg this week with the help of an aid agreement between the federal government and the Red Cross.

People who think they have been exposed to COVID-19 are asked to call the COVID-hotline at 1-888-975-8601 between 10 a.m. and 6 p.m. ET, or they can contact their local community health centre. They must also immediately isolate at home for 14 days. The territory says not to go to the health centre in person.