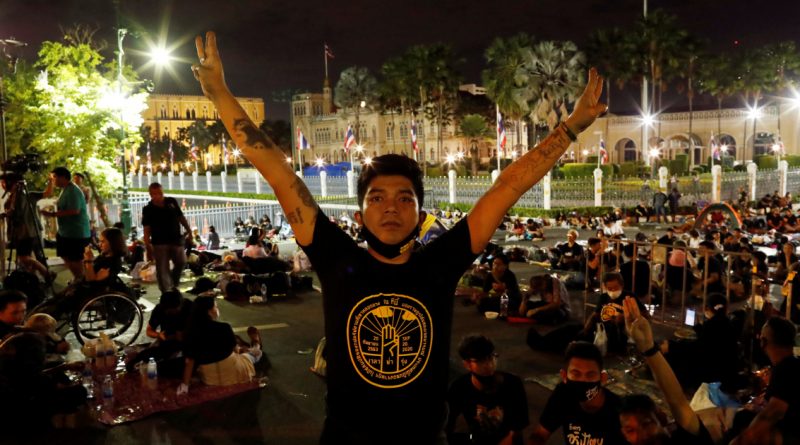 Thailand’s government has imposed a state of emergency in a bid to end three months of student-led street protests calling for reforms to the monarchy and the resignation of Prime Minister Prayuth Chan-ocha, arresting two of the movement’s leaders early on Thursday.

The ruling bans gatherings of five or more people and the publication of news or online messages that could harm national security.

Protests have escalated for three months and protesters set up camp outside Prime Minister Prayuth Chan-ocha’s offices in the capital Bangkok to demand his resignation late on Wednesday. The government said it also acted after demonstrators obstructed a royal motorcade.

Videos shared widely on social media showed police protecting the royals’ yellow vehicle from crowds of people holding their arms aloft in the three-finger salute that has become the symbol of the democracy movement and shouting their demands.

“It is extremely necessary to introduce an urgent measure to end this situation effectively and promptly to maintain peace and order,” state television said.

The announcement was accompanied by a document setting out measures that took effect from 4am local time (21:00 GMT) banning large gatherings and allowing authorities to ban people from entering any area they designate.

It also prohibits: “publication of news, other media, and electronic information that contains messages that could create fear or intentionally distort information, creating misunderstanding that will affect national security or peace and order.”

Shortly afterwards, police cleared the remaining protesters from outside Government House where they had camped out overnight. The authorities also arrested two protest leaders, Arnon Nampa and Panupong, the Thai Lawyers for Human Rights group said.

“Authorities arrested Arnon and Panupong at 5am,” the rights group said, adding that Arnon was arrested over a speech he had given in the northern city of Chiang Mai. It said the reason for Panupong’s arrest was not clear. Police made no immediate comment.

Tens of thousands of protesters marched in Bangkok on Wednesday, massing outside Government House, where the prime minister works.

The protest movement aims to remove Prayuth, the former army chief who took power in a 2014 coup that was meant to end a decade of violence between supporters and opponents of the country’s establishment, and solidified his position in elections that were held last year.

Those marching on the streets want a new constitution and have called for a reduction in the powers of King Maha Vajiralongkorn – breaking a long-standing taboo on criticising the monarchy.

Such overt challenges to the monarchy are unprecedented in Thailand, where the royal family’s influence permeates every aspect of society, and have prompted a backlash from Thailand’s staunchly pro-royalist establishment.

“We have begun to see it talked about more than ever before,” said Al Jazeera’s Scott Heidler, reporting from outside Government House. “But it’s one thing to see people on the streets demanding that reform and quite another to see it actually happen.”

Tensions rose on Wednesday around the royal motorcade as people wearing yellow shirts – symbolising their support for the monarchy – also began to gather. Some 15,000 police were deployed.

“The monarchy has been around more than 700 years,” said Sirilak Kasemsawat, one of thousands of royal supporters waiting “to show we love the king”.

Government spokesman Anucha Burapachaisri announced late on Wednesday that the prime minister had ordered police to press charges against “the protesters who obstructed the royal motorcade”.

Charges will also be pursued against “those who had acted in a way that defames the monarchy”, he said in a statement.

Several popular anti-government movements have arisen during the turbulent modern history of Thailand, which has endured long bouts of political unrest and more than a dozen successful military coups since 1932.

The army has long positioned itself as the sole defender of the ultra-wealthy king, who spends most of his time in Germany but whose power stretches across every facet of Thai society.

Activists have repeatedly said they wish only for the monarchy to adapt to modern times.

Their demands include the abolition of a strict royal defamation law – which shields the king from criticism – and for the monarch to stay out of politics.

Since the movement started in July, dozens of anti-government activists have been arrested, charged with sedition and released on bail.