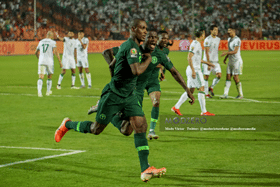 Sport
June 24, 2020June 24, 2020 Stan 0 Comments
LinkedInFacebookTweetPin
LiveChat will greatly increase the number of your satisfied customers. I've already tried it and I can recommend it as a go-to customer service tool! Sign up today for a free trial! Odion Ighalo has made a positive start to life at Manchester United, leading to suggestions that a return to the Super Eagles could be on the cards for the forward.Ighalo’s deadline-day move from Shanghai Shenhua to Manchester United came as a shock to many, but he has made a strong impression in England, and has been rewarded with a contract extension. He is now set to stay at United until at least January 2021.

Before Ighalo’s arrival at Old Trafford, the Red Devils were already one of the most followed European clubs in Nigeria, but their popularity has grown even bigger following the signing of the former Eagles’ striker.

The player has had his critics in Nigeria, but there is a collective desire for him to succeed in the Premier League. So far, he has not disappointed, scoring four goals in three starts for the English giants.

Basically when he plays, there is a good chance that he’ll score. Betting fans are starting to explore that option! “Ighalo to score” is always available at great odds on many Nigeria betting sites!

Ighalo announced his retirement from international football after helping Nigeria to a third-placed finish at the 2019 Africa Cup of Nations, a tournament in which he finished as top scorer with five goals.

The Eagles have since moved on from the 31-year-old forward, with exciting Lille forward, Victor Osimhen emerging as the new hit-man for the national team.

However, Ighalo’s form with Manchester United, and recent comments from the player have led to speculations that he could stage a sensational return to the squad.

In a recent interview, the United man hinted at a possible comeback, admitting that he had been thinking about reversing his decision to retire from international football.

He also revealed that he had been in contact with manager Gernot Rohr and Nigeria Football Federation president, Amaju Pinnick.

So, should Ighalo be called back into the national team?

Ighalo’s absence from the team has paved the way for new young talents to flourish. Victor Osimhen looks like the natural heir to the No. 9 throne, scoring four goals in seven matches for the Eagles in 2019.

The 21-year-old has been on fire for Lille, banging 18 goals in 38 appearances in his debut season with the Ligue 1 club.

Osimhen’s form has made him a subject of intense transfer rumours on betting sites like Betway in Nigeria, with reports linking him to the biggest clubs in England, Spain and Italy.

There are strong indications that he will make a big-money move away from Lille in the upcoming transfer window. This guy is definitely the future, and very much the present for the Super Eagles.

That is not to say that Ighalo has no place in the Eagles. If the player continues to play well for United, and is interested in making a return to the team, then he should be given a chance.

He is still only 31, and may have an AFCON and a World Cup still left in him. His experience could come in very handy at these major international tournaments.

However, he should only feature in a bit part role, and should not be given the regular starting berth he used to command.

It is important that we keep showing trust and confidence in Osimhen and the other young guns, and allow them to grow and develop into their full potentials with the national team. This will only be possible if they play regularly.

Ighalo can also play a vital role in this development. He has got loads of experience under his belt, and can definitely pass a lot on to the younger players.