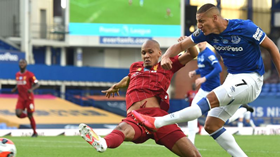 Sport
June 21, 2020June 24, 2020 Stan 0 Comments
LinkedInFacebookTweetPin
LiveChat will greatly increase the number of your satisfied customers. I've already tried it and I can recommend it as a go-to customer service tool! Sign up today for a free trial! English Premier League champions-elect Liverpool got another point towards the ultimate goal of winning the title after playing out a goalless draw against Everton at Goodison Park on Sunday evening, allngeriasoccer.com reports.

Toffees Italian boss Carlo Ancelotti handed a start to Alex Iwobi and the Nigeria national-teamer lasted 87 minutes on the pitch before making way for Bernard, while midfielder Dennis Adeniran who has been training with the first team was not in the matchday squad.

Everton had the biggest chance to win the game in the closing minutes when Richarlison elected to shoot instead of passing the ball to Iwobi.

Majority of Everton fans blasted Richarlison for not playing the ball into the path of the onrushing Iwobi who had made his way into the Liverpool box unmarked, and suggested that they could have won the game if the Brazilian was not selfish.

@Beggsy85 : “They had all the ball, especially 2nd half. But don’t recall Pickford having to make a save. Richarlison should of put it to Iwobi !! He’d of missed like, but still..”

@OrekoyaJoseph : “Richarlison’s hell will be hot for not passing to Iwobi, somebody say AMEN.”

@rampbell8 :”He was really good throughout, just wish he squared it to Iwobi”.

@JoeForde17 : “Richarlison squares that ball to Iwobi and we win the game simple as, howler of a decision”

@EaAdeoye : “A square play to an inrushing Iwobi would have probably handed them their first Derby win In a Decade.”

@yazebin : “RT PaddyArsenal: Richarlison saw Iwobi free for a clear shot on goal and thought I’ll do it myself”.

@Drew_FFC76 : “Why did Richarlison no put that on a plate for iwobi”.

@Pahpee : “If only Richarlison had passed the ball to Iwobi instead of shooting at such a tight angle..”

@hiseulgyul : “Should’ve passed it to Iwobi”.

Lewindowksi  : “Tom Davies should have scored. Richarlison should have passed to Iwobi later on than probably should of been a goal as well”.

@_Ahilaan_ : “Richarlison shld have just passed to Iwobi. He was open and unmarked”.

@kswiss95 : “why does richarlison play football? so greedy when iwobi was there”.

@secureboy23 : “Richarlison Should have played the ball to Iwobi”.

@theculturedguy : “Selfish from richarlison there. Could have put in iwobi”.