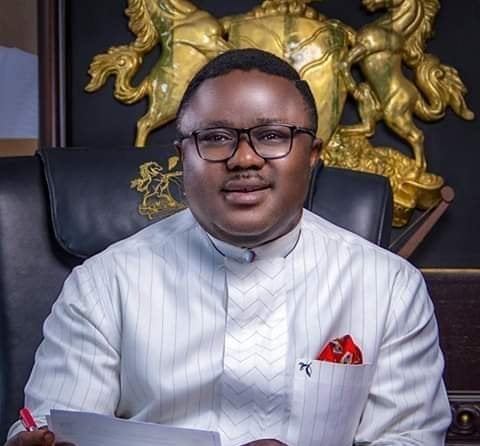 ABUJA — THERE appears to be a crack among the National Assembly members from Cross River State, as the Senator representing Southern Senatorial District of the state, Senator Geshom Bassey has thrown his weight behind Governor Ben Ayade on harmonization of list for the ongoing congresses.

Some National Assembly members and the State Governor have been in dispute over who controls the party structure of the state.

Some of the federal lawmakers have accused Ayade of trying to hijack the ongoing congress by ensuring that only people loyal to him emerge against the wishes of other party stakeholders.

Recall that the member representing Ogoja/Yala Federal Constituency in the House of Representatives, Hon Jarigbe Agom Jarigbe had at the weekend expressed worries over the state of affairs of the PDP in the state, saying that the Party was heading for disintegration if nothing was done.

Jarigbe said that the state chapter of the party was in disarray and may completely disintegrate if nothing was done to curb the megalomaniac disposition exhibited so far by its leadership in the state.

He said, “They are trying to arm-twist us to talk about harmonization when they had already completed a process, endorsed and published the names and they now want to reprobate, this will lead to a complete collapse of PDP in Cross River State.

“If the list of Wards and Chapter Executives is distorted it will lead to a total collapse of PDP, their tenure has already started running and the officials have stated carrying out the duty entrusted to them.”

But Senator Bassey, who is the Senate Committee Chairman on FERMA (Federal Road Maintenance Agency) told Vanguard that the postponement of the last Saturday congresses in the state has nothing to do with the purported hijack of party structure, rather it was to allow a consensus arrangement to avoid unnecessary friction.

Senator Bassey also debunked the insinuations that the State Governor was planning to sideline the National Assembly members.

Explaining on why the congress was postponed, he said, “There were several contenders for several positions, so the leader of the party in the state who is the governor decided that we should go for consensus, he has started talking to all stakeholders to achieve consensus.”

He said consensus would resolve the issue of litigations being witnessed in the state chapter of the party.

Asked why consensus instead of allowing members to go for election, he said, “Sometimes consensus works because it means there is no Victor, no vanquish, everybody has to queue into it. It makes the party stronger.”

Fielding question on the alleged dispute between the governor and National Assembly members over who controls the state party structure, he said in every party, there must be people with different views.

According to him,” You know we are in a political party and not a church organization, there must always be different point of view, that is normal for any political party. PDP and PDP in Cross River can be no different.”

Asked if the 2023 governorship election was the reason for the disagreement among party members, he said, “The fact is that most of the stakeholders are very experienced politicians. To quote Winston Churchill, everyone knows that a week is a long time in politics so you can imagine what three years is, three years is an eternity in politics. You cannot start in 2020 to plan for what will happen in 2023, it cannot work out. ”

Senator Bassey also said that the insinuations that the Governor Ayade-led PDP government was not doing well.

He said, ” The truth is that the government has challenges in funding. You know that we are one of the poorest funded government in Nigeria in terms of what we receive from the Federation Account, it is quite low.

On PDP being hijacked by the State governor, he said he was not aware of any such as congresses were yet to be held.

Giving insight on the alleged quarrel between the state governor and the National Assembly members, he said, “different stakeholders will have different point of view, that is normal in any political party and that is why we are trying to achieve consensus and we are making progress.

“My advice is that the leader of the party is leading the party in the right direction that is why we are talking about consensus, if we can achieve fairness to all stakeholders, you can be assured that this party is one strong party with minor differences, the difference is not really with the Governor, the difference is among the various stakeholders. I will assure you that in the next election PDP will sweep everything.”

He further said that there was no truth on the allegation that the state Governor was trying to woo the National Working Committee NWC, of the PDP so as to have his way in the ongoing congresses.

He said, “I think the National Working Committee led by Prince Uche Secondus has been fantastic, they have been very great in the way they conducted the last primaries and the way they have conducted these congresses in a free, fair and transparent manner. I absolutely don’t think they can be wooed.”