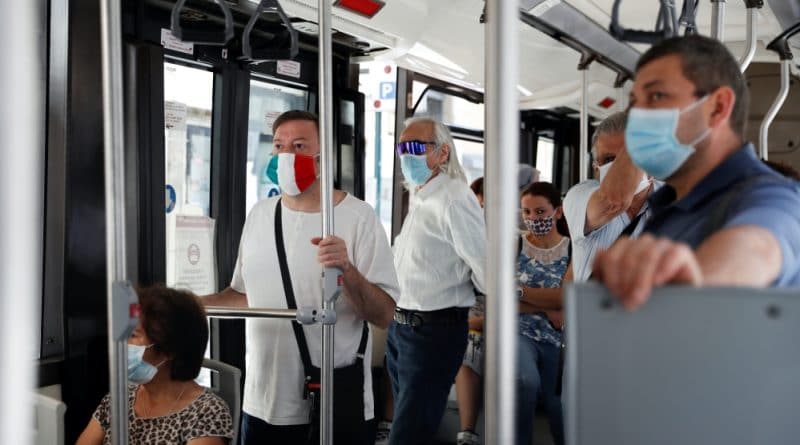 Malaysia said a November summit of leaders from Asia-Pacific Economic Cooperation (APEC) nations might still go ahead in the capital, Kuala Lumpur, despite the coronavirus pandemic.

New Zealand, which is hosting next year’s APEC summit, has said already that it will use virtual platforms to conduct the meeting due to travel restrictions and uncertainty caused by the COVID-19 outbreak.

But Malaysian Trade Minister Mohamed Azmin Ali said the government has not cancelled the meeting of the 21 leaders of the APEC countries that it is due to host in November, even though meetings of other officials will be held virtually.

The number of new coronavirus cases in the world has risen by 284,196 on July 24, the highest tally since the pandemic started in December, according to the World Health Organization (WHO).

The number increased 36,972 compared to the day before, the WHO data showed.

Thousands of Filipinos were crammed into a baseball stadium in Manila, breaking social distancing rules despite coronavirus risks, after people wanting to return to their home provinces flooded a government transportation program.

Officials had reserved the stadium as a place to test people before transporting them back to their home provinces under a program to help people who had lost their jobs in the capital return to their families elsewhere.

Officials had planned for 7,500 people to arrive at the stadium from Friday, but were caught out when another 2,000 people who were not yet scheduled to travel headed there anyway.

Al-Sadd coach Xavi Hernandez, the former Barcelona and Spain midfielder, said on Saturday he had tested positive for COVID-19 but was asymptomatic.

Xavi, who renewed his contract with the Qatari club on July 5, said he will self-isolate as his team prepare for their first match on Saturday after the Qatar Stars League (QSL) was suspended due to the COVID-19 pandemic.

Xavi said in a statement: “A few days ago, following the QSL protocol, I tested positive in the last COVID-19 test. Fortunately, I’m feeling ok, but I will be isolated until I am given the all clear. When the health services allow it, I will be very eager to return to my daily routine and to work.”

Xavi : Today I won’t be able to join my team on their comeback to the official competition. David Prats will be there on my behalf as head of the technical staff – coach to the @alsaddsc reserves. pic.twitter.com/HDvRd9ZN46

The nationwide tally of infections has risen to 806,720, Russia’s coronavirus crisis response centre said. The death toll now stands at 13,192, and 597,140 people have recovered. 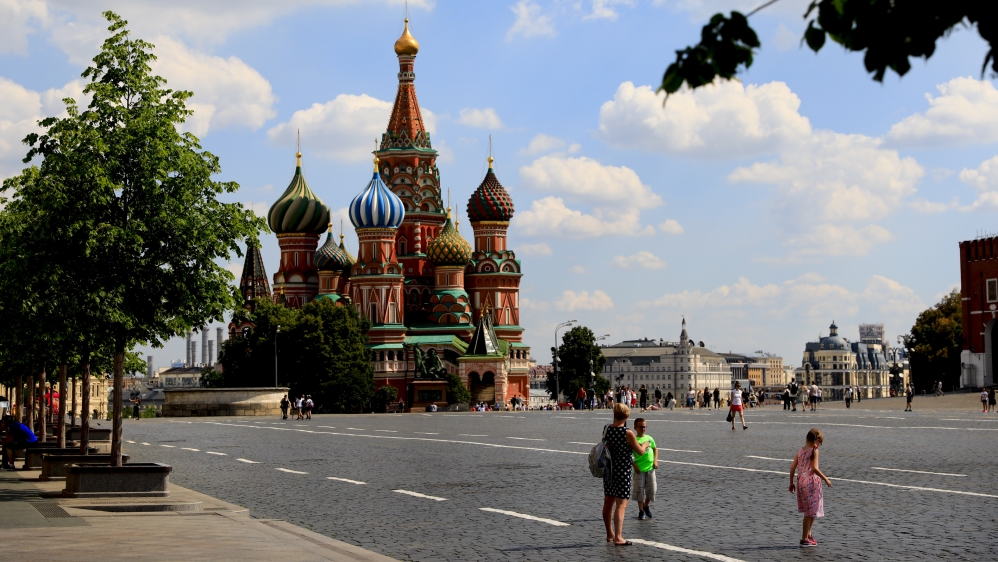 The number of deaths in the Southeast Asian nation related to COVID-19 rose by 49, to bring the total to 4,714, the data showed.

Singapore Prime Minister Lee Hsien Loong, 68, said he may have to delay his plans to step down as leader by the time he is 70 because of the novel coronavirus pandemic.

“I had expressed a hope that I would be able to hand over by the time I celebrate my 70th birthday but I do not determine the path of the COVID-19 pandemic,” said Lee, son of Singapore’s modern-day founder Lee Kuan Yew.

“A lot will depend on how events unfold and all I can say is I will see this through and I will handover in good shape as soon as possible to the next team.” 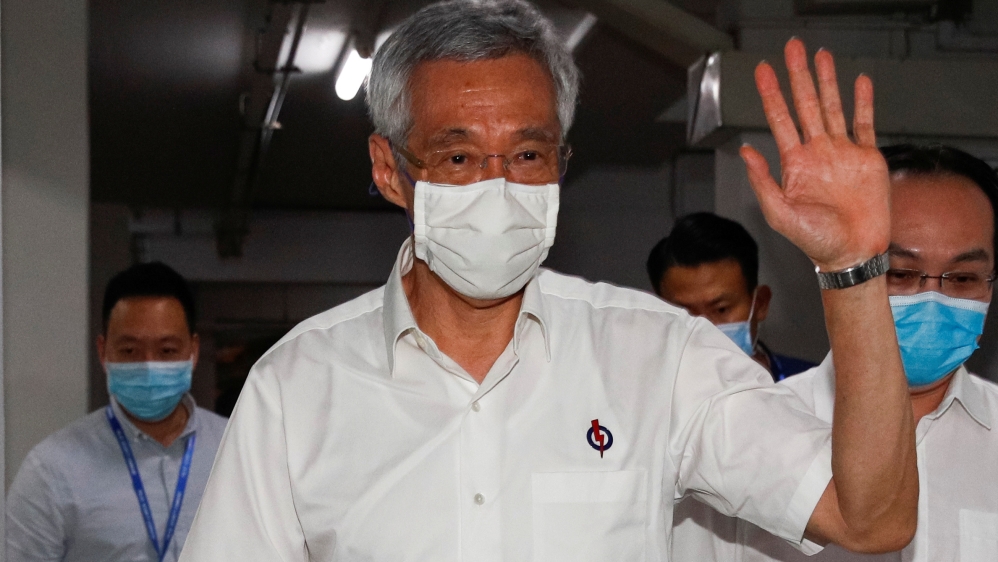 Ukraine reported 1,106 new cases of the coronavirus in 24 hours, the highest daily toll since a record on June 26, when it reached 1,109, Health Minister Maksym Stepanov said.

The number of new daily infections has increased sharply in the past two months following the gradual lifting of restrictions that began in late May.

Stepanov said 205 people had been admitted to hospitals. “It means their lives are under threat and we have to understand that this disease is very serious,” he told an online briefing.

The Federal Aviation Administration on Friday issued an emergency airworthiness directive for 2,000 US-registered Boeing 737 NG and Classic aircraft, warning of possible corrosion on parked planes that could lead to a dual-engine failure.

Inspectors found compromised air check valves when bringing aircraft out of storage following four recent reports of single-engine shutdowns on planes that had been parked, prompting the directive for aircraft not operated for seven or more straight days. 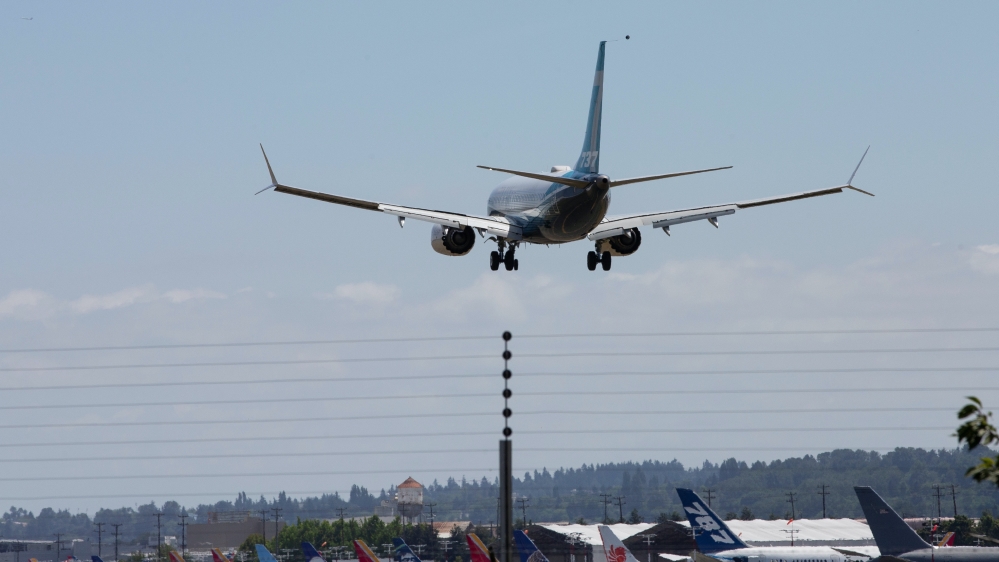 China reported 34 cases of the new coronavirus in the mainland for July 24, up from 21 cases a day earlier, the National Health Commission said.

Of the new infections, 20 were in the far western region of Xinjiang, according to a statement by the NHC. Nine were in the northeastern province of Liaoning, while the remaining five were imported cases. China reported 74 new asymptomatic cases, up from 43 a day earlier.

South Korea reported 113 cases of the new coronavirus, the Korea Centers for Disease Control and Prevention (KCDC) said, the largest one-day increase since March, bringing the country’s total to 14,092.

Of the new cases, 86 were imported and 27 were domestic infections.

South Korean health authorities on Friday said novel coronavirus infections among people arriving from abroad could drive the number of new cases above 100, the first time since the beginning of April that daily cases hit triple digits. 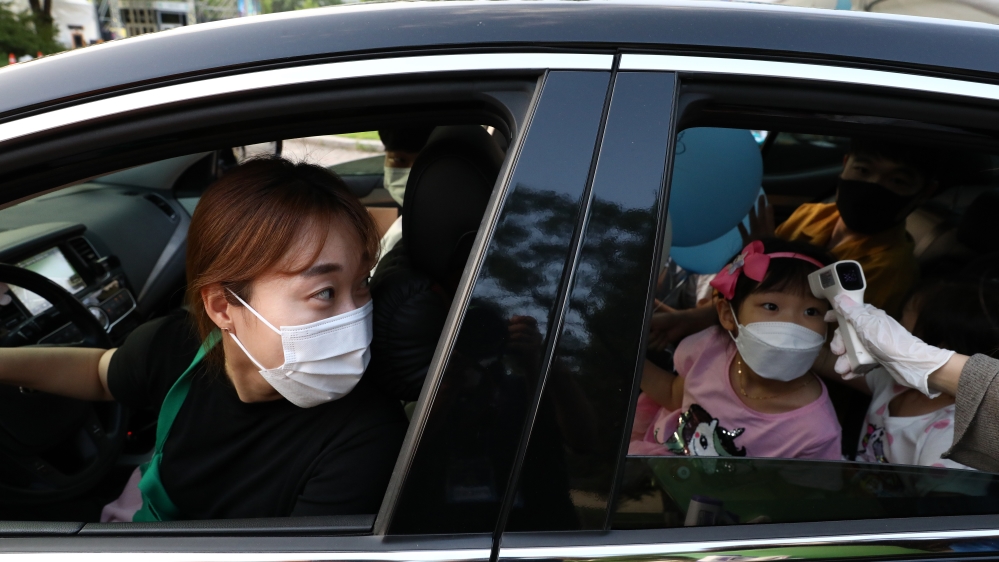 Saturday’s tally of 113 infections was the highest since March 31, when 125 cases were reported [Getty Images]

The number of confirmed coronavirus cases in Bulgaria passed 10,000, as the Balkan country reported 270 infections in the past 24 hours, official data showed.

Eight people had died from the virus overnight, taking the official death toll to 337. Total infections stand at 10,123. Some 5,252 people have recovered, data from the official coronavirus information platform showed.

The number of confirmed coronavirus cases in Germany increased by 781 to 204,964, data from the Robert Koch Institute (RKI) for infectious diseases showed.

The reported death toll rose by seven to 9,118, the tally showed. 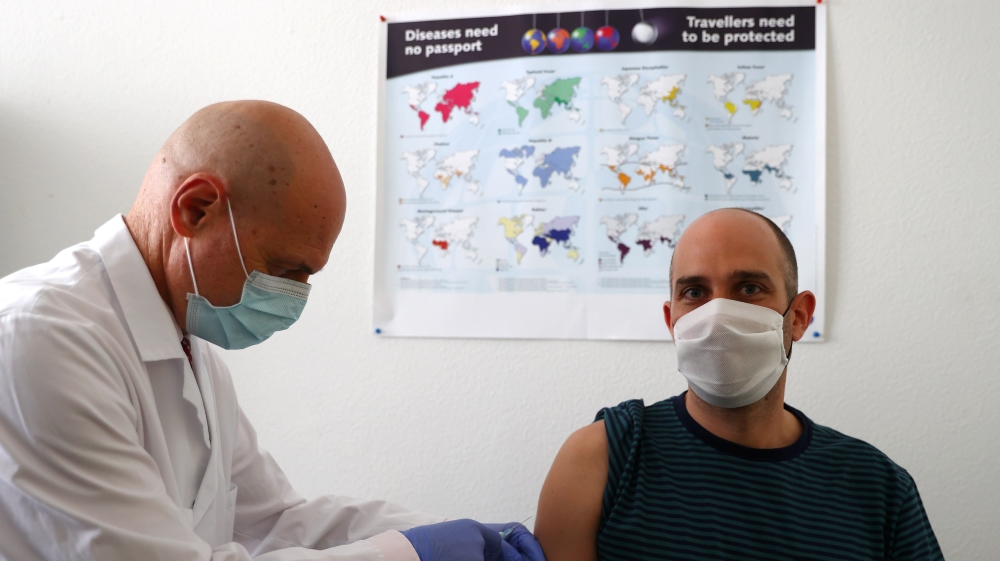 Vietnam reported its first local coronavirus infection in more than three months after a man in the central city of Danang tested positive four times for the virus, a government statement said.

Thanks to strict quarantine measures and an aggressive and widespread testing programme, Vietnam had kept its virus total to an impressively low 415 cases, and had reported no locally transmitted infections for 100 days.

Vietnam announced that it was banning wildlife imports and would close wildlife markets in response to renewed concerns about the threat from diseases that can jump from animals to humans.

An order signed by Prime Minister Nguyen Xuan Phuc bans all imports of wildlife dead or alive and includes eggs and larvae. It also merits tougher penalties for crimes involving the trade in wildlife.

Under new rules, tickets must be booked in advance, attendance is capped at 30 percent of the capacity and no eating or drinking is allowed during the show.

A temperature check and online travel record are required for entry. 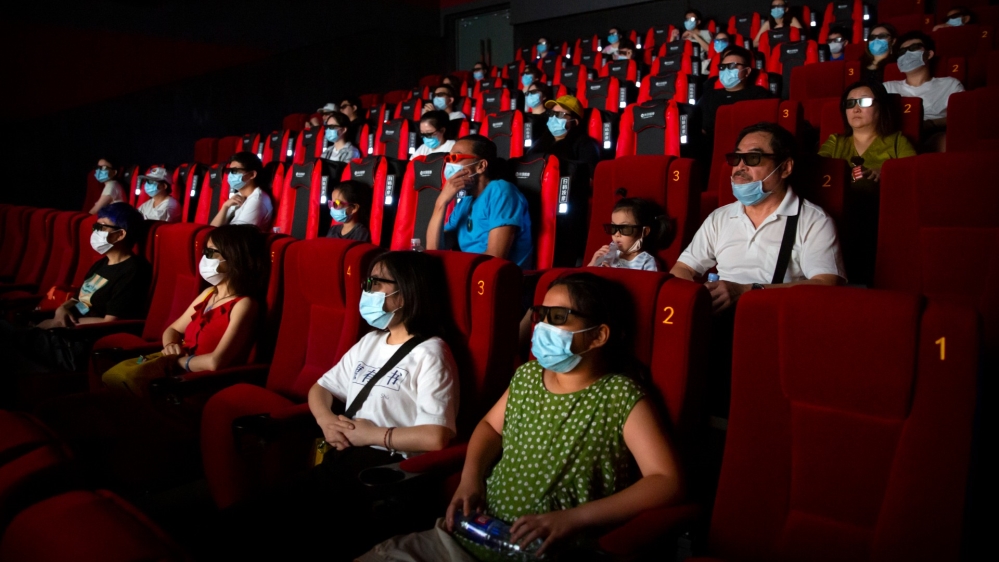 South Korea reported 113 newly confirmed cases of COVID-19 over the past 24 hours – its first daily jump above 100 in nearly four months.

But the rise was expected as health authorities had forecast a temporary spike driven by imported infections found among cargo ship crews and hundreds of South Korean construction workers flown out of virus-ravaged Iraq.

(LEAD) New virus cases spike to over 110 on cases coming in from Iraq, Russia https://t.co/XuzRX3AOun

The US recorded more than 1,000 deaths from COVID-19 for the fourth straight day on Friday. But a top White House adviser on the pandemic said she saw signs that the worst could be past in hard-hit southern and western states.

The numbers have been driven in large part by a surge in infections in Arizona, California, Florida and Texas.

“We’re already starting to see some plateauing in these critically four states that have really suffered under the last four weeks, so Texas, California, Arizona and Florida, those major metros and throughout their counties,” Dr Deborah Birx told NBC News in an interview.

Chilean President Sebastian Pinera signed into law a plan to allow citizens to withdraw 10 percent of their pension savings.

The legislation, approved by two-thirds of the parliament, was created to give quick cash to millions of Chileans who lost jobs because of the economic shutdown aimed at slowing the spread of the coronavirus.

Opinion polls indicate nearly nine out of every 10 Chilean planned to tap their funds. Most said they would use the money to pay for basic goods and services, but others said they planned to invest the money elsewhere.

01:38 GMT – US court turns down church challenge to Nevada rules

The US Supreme Court declined to lift a 50-person limit on religious services adopted by the state of Nevada in response to the coronavirus pandemic.

By a 5-4 vote, the justices denied a request by Calvary Chapel Dayton Valley in rural Nevada for an interim order that would have allowed it to host services for about 90 congregants.

The majority did not explain its reasoning.

The US Immigration and Customs Enforcement (ICE) announced new guidelines that will block new foreign students from entering the country if they plan to take their classes entirely online in the coming school term.

In a memo to college officials, ICE said new students who were not already enrolled as of March 9 will “likely not be able to obtain” visas if they intend to take courses online.

The policy strikes a blow to colleges a week after hundreds united to repel a Trump administration policy that threatened to deport thousands of foreign students.

That rule sought to bar all international students in the US from taking classes entirely online in the new school year, even if their universities were forced to switch to fully online instruction amid an outbreak.

The top health agency in the US issued new guidelines on reopening schools, stressing the need for children to get back into the classroom despite fears about safety as coronavirus cases surge across the country.

The Centers for Disease Control and Prevention (CDC) added the documents, titled The Importance of Reopening America’s Schools this Fall, after President Donald Trump called earlier recommendations too tough, impractical and expensive.

Trump sees reopening of schools as important to boost the economy as he seeks re-election in November.

Dr Robert Redfield, CDC director, said the additional documents were “all put out with the intent to help facilitate … the full reopening of schools for face-to-face learning”.

You can find all the key developments from yesterday, July 24, here.