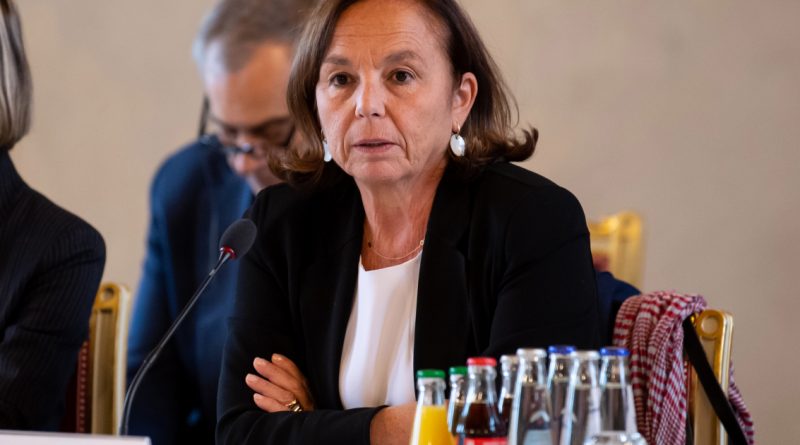 Rome, Italy – Italy’s interior minister hit back at far-right accusations that the government’s “open-door policy” was to blame for allowing the arrival and transit of a Tunisian man suspected of killing three people at a church in the French city of Nice.

Minister Luciana Lamorgese’s comments came after her predecessor and leader of the anti-migrant League party, Matteo Salvini, led a chorus of far-right and centre-right voices calling for her resignation, alleging she and Prime Minister Giuseppe Conte held the “moral responsibility” for Thursday’s attack in Nice.

“There is no responsibility on our part,” Lamorgese told reporters on Friday, adding it was “time to stop with these polemics and to be close to the French people and to other European countries, because this is an attack on Europe”.

The suspect, 21-year-old Brahim Aouissaoui, arrived on September 20 in Lampedusa, an Italian island on the southern edge of Europe that has long been the first point of entry for those crossing the Mediterranean Sea in a bid to reach Europe.

More than 27,000 refugees and migrants reached Italy via the sea from January 1 to October 29, compared to 9,533 in the same period of 2019, according to interior ministry data. More than 11,000 recently arrived from Tunisia.

Following his arrival to Lampedusa amid the coronavirus pandemic, Aouissaoui was put in isolation with about 800 other people on the Rhapsody quarantine vessel, and then transferred to the mainland city of Bari.

Larmorgese has said Aouissaoui was never previously flagged as a potential threat by Tunisian authorities or intelligence services. A parliamentary committee on security, though, requested a session to question Lamorgese and police chief Franco Gabrielli over the transit of the suspect.

Like all Tunisians entering Italy who are classified as economic migrants, Aouissaoui was handed an expulsion order to leave the country in seven days starting from October 8.

But rather than returning home, he headed to France.

Lamorgese did not provide details on what actions, if any, were taken to ensure Aouissaoui complied with the order.

The man arrived in Nice by train in the early hours of Thursday before entering the Notre-Dame Basilica, where he allegedly beheaded a 60-year-old woman, cut the throat of a 55-year-old man, and stabbed another 44-year-old woman, who managed to escape to a nearby cafe before succumbing to her wounds.

The suspect is currently in critical condition in a hospital after being shot many times by the police.

Salvini, who was former interior minister, criticised the Italian government for “allowing the entrance in Europe of thugs murderers”, referring to an amendment earlier this month of his controversial bills that stripped asylum seekers of key protections and banned entry to rescue vessels.

In response, Lamorgese said Salvini’s so-called security decrees “rather than generating security, have created insecurity”, pointing out that 20,000 people have been left out of migration centres.

Citing previous attacks, Lamorgese added: “I ask myself why on Earth the opposition forces, which today apologised to France, to which I express all my solidarity, did not think of apologising in other serious cases like the attack on the London Underground, at London Bridge in 2017, and at [Barcelona’s] Rambla in 2017.”

Anna Simone – a professor of political sciences at Roma Tre University whose work has focused on researching the criminalisation of migrants on the media – said events such as the attack in Nice “intensify the hatred towards migrants in an indiscriminate way, and associate the figure of the migrant to the one of the terrorist – with extremely dangerous consequences”.

“Obviously such episodes are then instrumentalised by the far-right to criticise the current migration policies,” Simone said.