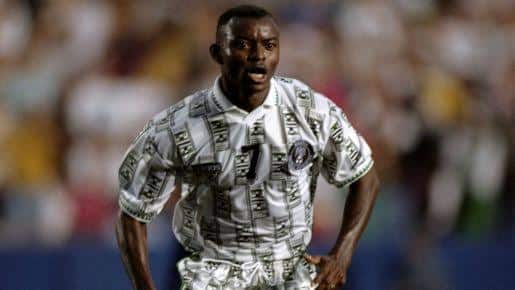 The former international has been unimpressed with the manner the country’s top football administrator has been combing England and begging players to play for Nigeria.

Ajax legend Finidi George has charged the President of the Nigeria Football Federation, Amaju Pinnick, to thrash his ideology of populating the Super Eagles with foreign-born stars, but rather to look for ways to develop the local league.

Finidi insists that it is when the Nigeria Professional Football League is developed that it can produce top-quality stars that would make the country proud.

During Pinnick’s tenure as the NFF boss, the likes of William Troost-Ekong, Ola Aina, Victor Moses, and Leon Balogun switched their international allegiance to feature for the three-time African champions.

The former Delta State FA boss has not always been successful in his pursuit of players born overseas, though. The Chelsea duo of Tammy Abraham and Fikayo Tomori famously decided for England despite public assurances from Pinnick.

The dust raised by that ugly failed attempt had barely settled when Pinnick began the chase for England youth international, Ebere Eze.

Finidi, though, is convinced there is a better way of doing such things.

“Now we are running after players that were born in Europe to come back and play for Nigeria. Who will train them for you? You want others to train players, and you wait to convert them to change their nationality so they can come and play for Nigeria? Why don’t you train your own here in Nigeria?” the former Real Betis winger opined in a chat with The Vanguard.

“I am not saying Nigerians born outside should not play for Nigeria, after all, in the past, we had Reuben Agboola and others, but they were just one or two. We were not rushing on anybody born in Europe and playing football.

“All we need do is to work on our home bred players; maybe when you find one or two good ones from outside there, they can come and join the team.

“Not when you read about one player in the UK, and you will want to speak with the father to have him come and play for Nigeria. If you train your team very well, it is they who are born in Europe that will run to identify with the Super Eagles. Put your house in order, and they would, on their own come. Let them be fighting to come.

“If our league is good and our players are top class players, it is their parents who will be telling them to go join the Nigerian national team. So the level is so bad now that nobody wants to play for Nigeria and we are sending people to go and beg parents, please, your son is a Nigerian, let him come and play for his country of origin.

“So let us put our house in order, revive the league, and you will see most of these people running to Nigeria and our national team will be stronger,” the 1994 AFCON-winning midfielder concluded

Recall that the NFF boss earlier stated that the current stale condition of the local league is the reason home-based players find it difficult to earn Super Eagles call-ups.