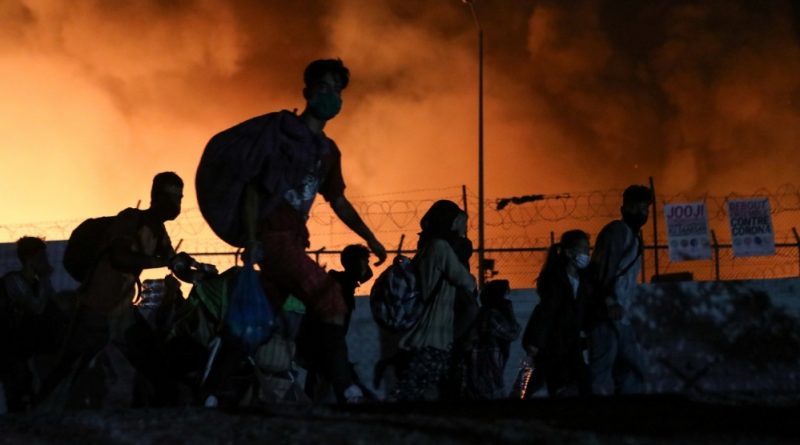 A fire has gutted the overcrowded Moria camp on the Greek island of Lesbos, forcing thousands of refugees and asylum seekers to flee.

The cause of the blaze, which destroyed the camp in the early hours of Wednesday, was not immediately clear.

Prime Minister Kyriakos Mitsotakis called ministers to an emergency meeting but there were no immediate reports of casualties.

As the blaze intensified, people were seen escaping the camp, carrying their luggage in their hands.

The fire comes just a week after the first cases of coronavirus in the camp were reported.

Nearly the entire camp, the largest in Greece, was on fire, including in an olive grove outside the walls of the main compound where many people sleep in tents.

Volunteers supported dozens of firemen in their attempt to quell the flames.

Stand by Me Lesvos, a refugee support group, said on Twitter it had received reports that some of the island’s Greek residents prevented fleeing asylum seekers from heading into a nearby village.

“The whole camp is on fire. Everything is burning. People are escaping. Their homes in Moria are gone,” the organisation said.

People escaping out of #Moria.
We pray that these people will have had enough trauma for tonight as we simultaneously are getting reports of some locals attacking and blocking people’s passage into the nearby village. https://t.co/CvtHGQ2zMt | #StandingTogetherForLesvos pic.twitter.com/ADoOMw2wcu

The camp was home to some 13,000 people – more than four times its stated capacity.

Moria saw a spike in coronavirus infections since reporting its first case last Wednesday, when it was placed in lockdown, with 35 confirmed cases so far.

Greek news agency ANA said the fires started after a revolt by people who were to be placed in isolation after testing positive for coronavirus or coming into close contact with an infected patient.

Firefighters said earlier there were “scattered fires” around and inside the camp.

Lesbos, which lies just off the Turkish coast, was on the front line of a large movement of refugees and asylum seekers to Europe five years ago. Wildfires fanned by strong winds were also burning in two other areas of the island.

Stand by Me Lesvos, a refugee advocacy group, said the whole camp was on fire [Manolis Lagoutaris/AFP]