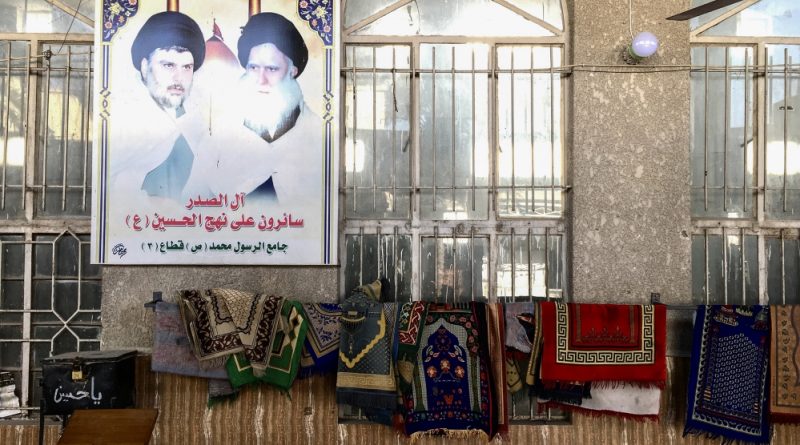 Baghdad, Iraq – On a recent morning, at the foot of a towering building known as the Turkish restaurant in Baghdad’s Tahrir Square, a man dressed in black rallied a small audience, calling for an end to the United States‘ presence in Iraq.

The men – nicknamed the blue caps after their signature headgear – are die-hard supporters of Muqtada al-Sadr, a prominent Iraqi Shia leader known for his mercurial temper and large, cult-like following which includes a well-armed militia.

For months Al-Sadr worked to remain at the forefront of Iraq’s anti-government protests, a popular movement that swept across the capital and southern cities in October, driven by demands for basic services, more job opportunities and an end to government corruption and foreign interference in Iraqi affairs. His followers provided support and at times a degree of protection to the civilian uprising.

But in recent weeks al-Sadr has shifted position. In late January, he withdrew support for the protests only to call on his supporters to return to the streets a week later, causing confusion among those on the streets and widening a rift between his die-hard supporters and the largely leaderless youth who have driven the protest movement. Al-Sadr then approved the decision to name Mohammed Allawi as prime minister-designate, a choice that has been met with opposition among the non-aligned protesters.

Earlier this week, seven protesters were killed and more than 150 wounded when clashes broke out between protesters and organised Sadrists in Najaf.

The incident came just hours after al-Sadr called on his supporters to “come together to reveal the saboteurs and the nationalist pretenders by helping the security forces.

“The blue hats have to pave the way for this with love, peace and compassion,” he said in a Tweet.

In his weekly sermon on Friday, the revered Iraqi Shia religious leader Grand Ayatollah Ali al-Sistani condemned the security forces for failing to protect the protesters in Najaf. “There is no excuse for shirking that duty,” he said.

That afternoon, a group of non-aligned protesters marched through Tahrir carrying the Iraqi flag and chanting: “Sistani, your sons are in Tahrir.”

A stone’s throw away, inside the Turkish restaurant, women clad in black chanted slogans in support of the Mahdi army, al-Sadr’s militia, known since 2014 as Saraya al-Salam. 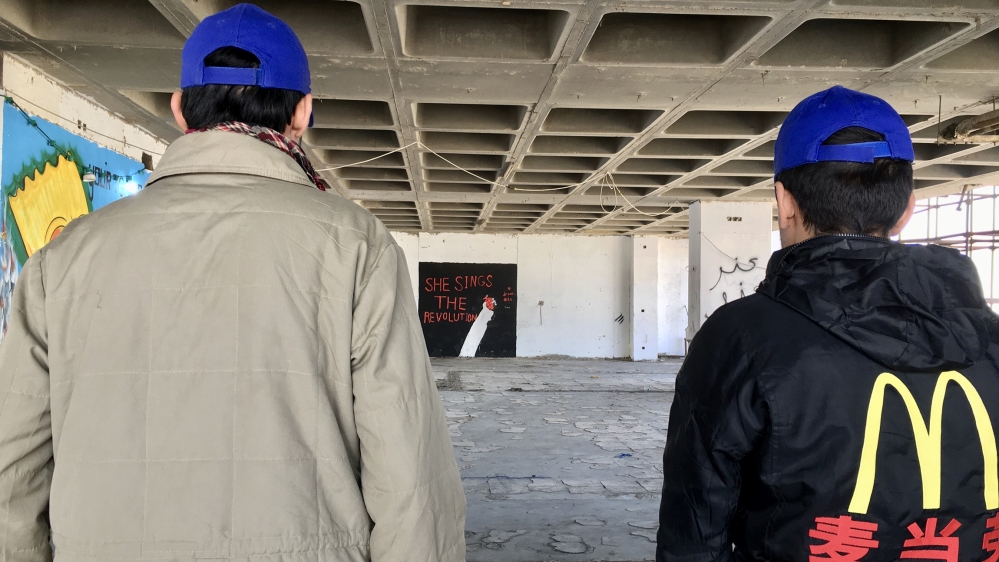 ‘They’ve split the square in two’

For the first months of Iraq’s uprising, the Turkish restaurant in Baghdad was known for being a protest stronghold and a place for communal gathering. On Sunday al-Sadr supporters removed the demonstrators, turning the unfinished building into a bare and quiet space.

“Muqtada al-Sadr is killing us,” said a teenage protester, before catching a glimpse of a loitering tall man in a blue hat and lowering his voice.

“They are killing in Baghdad and in Nasiriya [and] they took down the pictures of our victims,” he said, pointing to the Turkish restaurant, where the portraits of killed protesters once hung but were torn down by Sadr’s supporters.

Some protesters say they are grateful for the arrival of the blue caps. “They cleared the [Turkish] restaurant of drugs,” said Jamal Jassm, 48.

Others, like a 17-year-old known as Vife, say they have stopped feeling comfortable inside Tahrir square: “They’re at checkpoints and starting to give us orders”.

What appeared to be a unified civilian movement soon fractured into opposing camps as reports of violent incidents increased.

In Tahrir Square, the division is stark, with blue caps congregating primarily around the Turkish restaurant and manning checkpoints, and non-aligned protesters rallying next to the Freedom Monument, with Tahrir’s busy roundabout acting as a buffer zone. 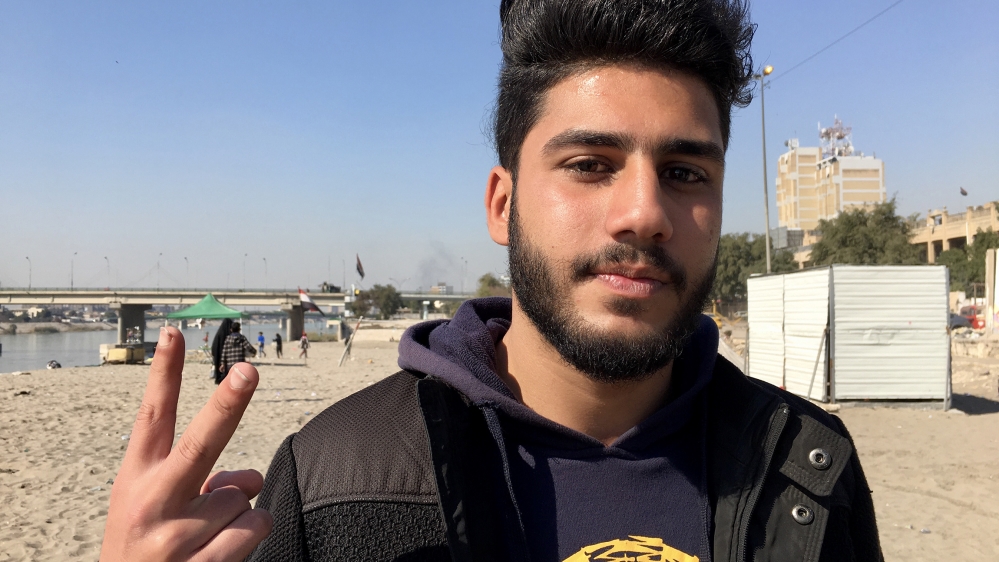 “The blue caps have split the square into two, we’re trying to reunite the square,” said Medo, a 19-year-old protester who asked that his real name not be used.

“They insult us, if we answer back, they threaten us with violence,” said another young protester sitting in a tent by the Tigris river.

But Medo and his friends say they know what they are up against – a gang of armed men whose allegiance to Muqtada al-Sadr is primary.

Al-Sadr was born into one of the country’s most prominent religious families in 1974, but his father, Grand Ayatollah Moḥammad Sadeq al-Sadr, did not intend for his seminary to be inherited by his son. Instead, he left it in the hands of a fellow scholar, who ultimately delegated the responsibility to Muqtada.

And while he inherited his father’s followers, not everyone trusted that al-Sadr could live up to the Grand Ayatollah’s iconic image.

His volatile nature and poor academic record – young Muqtada did not complete his religious studies – were well known among the Iraqi public and many, including politicians, as well as neighbouring Iran remained sceptical.

His powerful family ties helped him maintain his position of authority and in the wake of the 2003 US-led invasion of Iraq, al-Sadr made a bid to expand his political power. Harnessing nationalistic sentiment in the country, he began to build his eponymous political movement along with an anti-US militia, successfully appealing to millions of followers from low-income areas by offering education and health services.

The young religious scholar’s often reckless decision-making did not deter old and new followers alike from backing him as he built a political base, lending him the popular support that would later make him a key power broker in Iraqi politics as the head of the Sairoon Alliance. 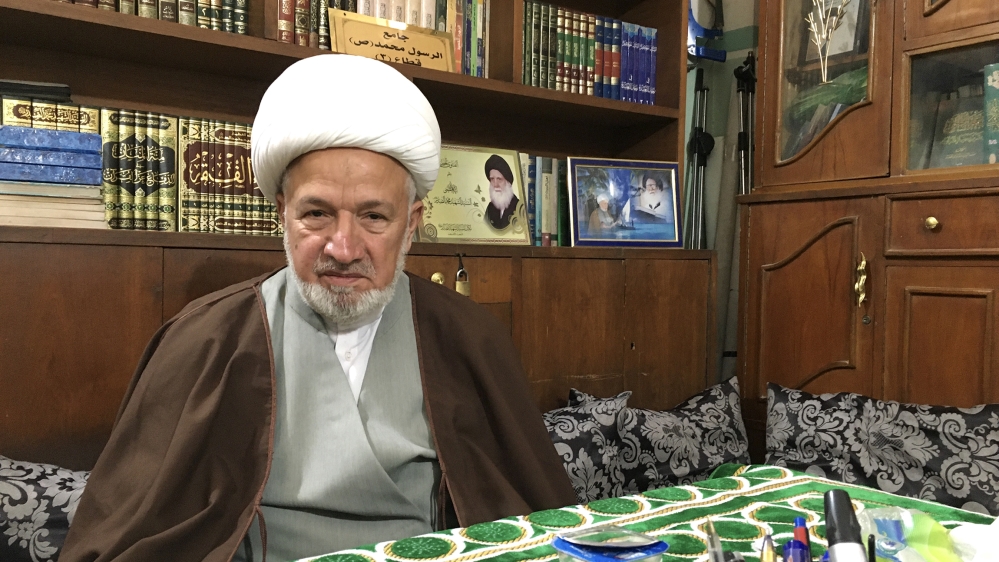 In May 2018, Sairoon won the largest number of seats in the country’s parliamentary elections, effectively giving its leader veto power in recent deliberations to appoint a new government.

Al-Sadr “likes to pretend to be a cleric above and beyond the political, but actually, everything he’s done … and especially his militiamen, are anchored in a political understanding of the country that they’re in … their policies are political, not religious,” Mitchell Belfer, President of the Euro-Gulf Information Centre (EGIC), told Al Jazeera.

While Iran was once suspicious of relying on al-Sadr’s volatile nature, his recent visits and meetings in Iran suggest a marked improvement in his relationship with the neighbouring country, with some analysts suggesting Tehran is showing a newfound readiness to support al-Sadr, further emboldening him in his quest for power.

“Now that the dust has settled in relation to the Iraq-Iran relationship, once again, his flavour of the month is Tehran,” said Belfer. But as he rises through the ranks of Iraq’s political system, al-Sadr may be losing the support among his less-hardened supporters, namely those who have joined the protests.

In January al-Sadr momentarily withdrew his support for the anti-government protests when he called for a separate “million-man march” against the US presence in Iraq. Many expected to see the country’s squares empty out and for demonstrators to join the anti-US protests.

But anti-government protesters still gathered separately from the Sadrists, setting the stage for the later clashes between rival groups.

Ali, a 29-year-old man from Sadr City and a staunch al-Sadr supporter did not heed the cleric’s orders to leave the protests.

“I love Muqtada al-Sadr because he was the one who fought against the American interference, the first one to call for demonstrations,” said Ali. “He’s a good leader but I’m participating in these demonstrations [for the] homeland, not al-Sadr and I will still be in the square participating until I achieve the demands of the martyrs.”

But when al-Sadr called on his supporters to return to the streets last week, some anti-government protesters said they would not be welcome. “We do not rely on al-Sadr supporters, we do not want them back, not until they are free,” said 60-year-old Abdul Ridha Abdul Raheem.

According to EGIC’s Belfer, the initial support lent by al-Sadr to the demonstrations was not a “genuine acceptance of their demands, but rather a way for him to exercise a degree of control”.

“His security personnel, his militiamen, were basically ‘protecting’ the demonstrators, but actually what they were really doing was learning their strength and their weaknesses, their leadership,” said Belfer. 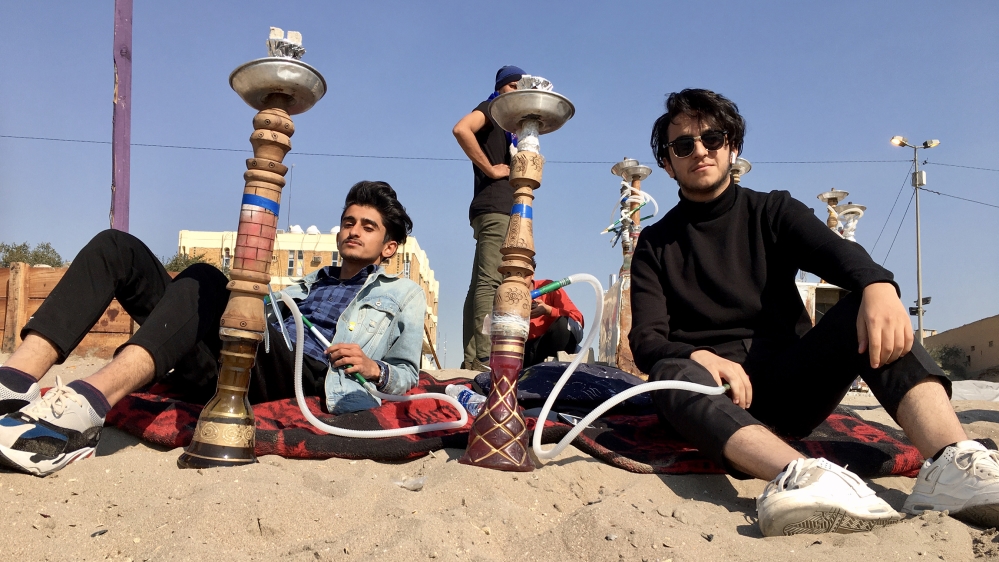