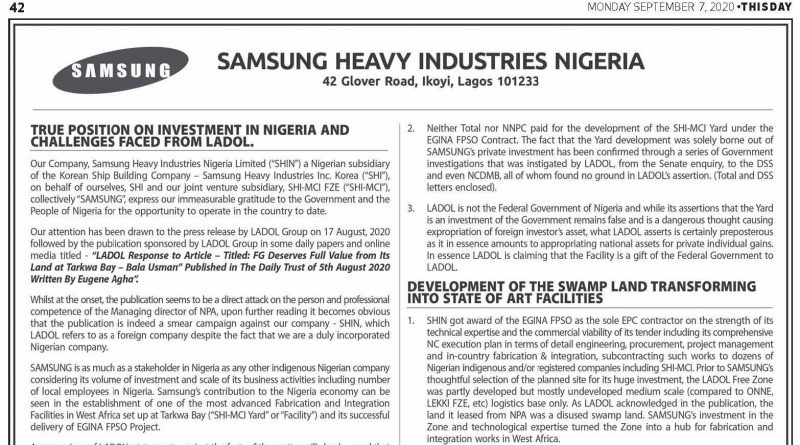 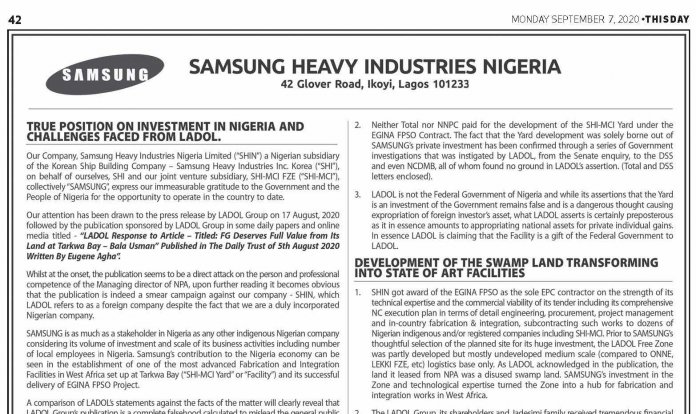 Our Company, Samsung Heavy Industries Nigeria Limited (“SHIN”) a Nigerian subsidiary of the Korean Ship Building Company – Samsung Heavy Industries Inc. Korea (“SHI”), on behalf of ourselves, SHI and our joint venture subsidiary, SHI-MCI FZE (“SHI-MCI”), collectively “SAMSUNG”, express our immeasurable gratitude to the Government and the People of Nigeria for the opportunity to operate in the country to date.

Our attention has been drawn to the press release by LADOL Group on 17 August, 2020 followed by the publication sponsored by LADOL Group in some daily papers and online media titled – “LADOL Response to Article – Titled: FG Deserves Full Value from Its Land at Tarkwa Bay – Bala Usman” Published in The Daily Trust of 5th August 2020 Written By Eugene Agha”.

Whilst at the onset, the publication seems to be a direct attack on the person and professional competence of the Managing director of NPA, upon further reading it becomes obvious that the publication is indeed a smear campaign against our company – SHIN, which LADOL refers to as a foreign company despite the fact that we are a duly incorporated Nigerian company.

SAMSUNG is as much as a stakeholder in Nigeria as any other indigenous Nigerian company considering its volume of investment and scale of its business activities including number of local employees in Nigeria. Samsung’s contribution to the Nigeria economy can be seen in the establishment of one of the most advanced Fabrication and Integration Facilities in West Africa set up at Tarkwa Bay (“SHI-MCI Yard” or “Facility”) and its successful delivery of EGINA FPSO Project.

A comparison of LADOL’s statements against the facts of the matter will clearly reveal that LADOL Group’s publication is a complete falsehood calculated to mislead the general public and to incite the Government against our company all in the bid to annex SAMSUNG’s investment in Tarkwa Bay. As part of the bid to usurp our investment, LADOL Group in the said publication totally denied our investment and joint ownership of the SHI-MCI Yard, going ahead to lay claim to the asset. It further went ahead to take full credit for our success in winning and delivering the EGINA FSPO EPC Project, when in essence LADOL Group had no direct contribution to the award and/or the delivery of the EGINA FPSO Project other than being the sub-lessor, an exorbitant service provider and a shareholder to SHI-MCI.

For clarity, SHIN was the sole EPC contractor of the EGINA FPSO Project and the JV of SAMSUNG and LADOL (in which MCI an affiliate of the LADOL Group is a 30% minority shareholder), was just one of the many in-country subcontractors to SHIN.

Our specific reaction to the falsehood and fallacies contained in the publication is as follows:

Development of the Swamp Land Transforming into State of Art Facilities

In their quest to obtain the unjustifiable $33million FOB charge, LADOL as a Zone operator engaged in the abuse of their authority. LADOL suspended SHIN’s operating license in July 2018 despite the directive to issue license by NEPZA. LADOL delayed the issuance of export documents and decided to take the EGINA FPSO hostage by imposing a monopoly during the most critical time in the delivery of the EGINA FPSO.  LADOL downplayed the magnitude of the sum of $33million comparing it to the Project cost of $3.3billion, SHIN must emphasize that the FOB charge was invoiced to SHI-MCI, who was just a subcontractor to SHIN under EPC contract and not the recipient of the alleged EGINA FPSO EPC project cost, the levy therefore amounted to over 10% of SHI-MCI overall revenue on Egina Fabrication&Integration work in Nigeria More importantly, such levy as imposed on SHI-MCI a free zone entity, violated/contradicted the tax- exemption benefit legally provided to entities in the free zone.

In conclusion, we have no doubt that this recent publication with its false assertions is another malicious attempt by LADOL Group to frustrate and smear our company’s image all in its bid to appropriate SAMSUNG’s investment that has transformed/industrialized its Zone and positioned Nigeria as the West African hub for fabrication and integrations works. Moreover, such a hostile behavior and attitude against its foreign investor, may scare the international community, breaking the will to bring Foreign Direct Investment into Nigeria. It was therefore imperative that we clarify the facts to the public, the Government and all relevant stakeholders in order to ensure that a private individual will not hide under the cloak of some alleged government directives on issues that are sub-judice, to fraudulently appropriate a foreign investment and claim false ownership of the asset.

We assure you of our continuous support and commitment to Nigeria.