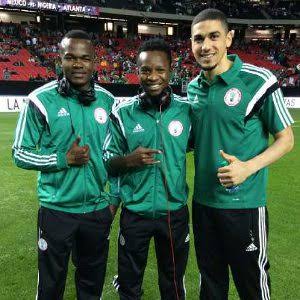 A large section of Glasgow Rangers fans continues to marvel at the capability of Leon Balogun after the Super Eagles fans help his new side to another clean sheet and dominant victory on Sunday.

Balogun was solid in his first-ever game at the Ibrox Stadium, playing every single minute, as Steven Gerrard’s side powered to a convincing 3-0 win over St. Mirren.

Alfredo Morelos scored twice for Rangers before Connor McCarthy’s own goal for the third made it two wins out of two games without conceding a goal for Steven Gerrard’s side.

It should be recalled that Balogun started on a winning note last weekend away to Aberdeen, earning himself a spot in the League’s Team of the Week.

The 32-year-old joined Rangers from Wigan Athletic on a free transfer last month, and some Gers fans are still wondering how such a quality defender could have been available for free.

Early days, but I think big @LeonBalogun might prove to be our most important signing of the season.

I’m not usually a fan of selling our best players during the season but if a £20m offer came in for Leon Balogun in January the board would have a difficult decision to make.

Mr @LeonBalogun incase you are too humble to notice….you have a full support behind you and with the demands of being a ger….thats a no bad start 😂😂😂

Another great shift today from @LeonBalogun! 💙

3 points, some lovely football and another solid performance from @LeonBalogun 🍺🇬🇧🔥

Leon balogun and Connor goldson are forming an impressive partnership, in the centre of Rangers defence

Balogun signed a one-year contract with Rangers after he completed the season on a short-term contract with Wigan following a loan deal from Brighton & Hove Albion.