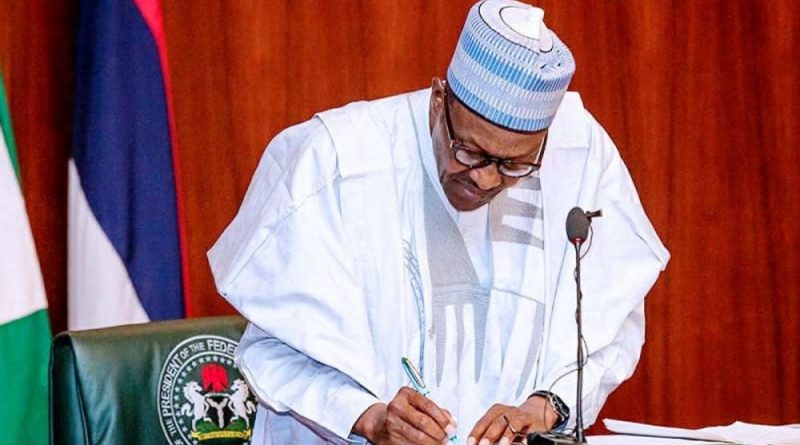 Local News
May 26, 2020May 26, 2020 Mary 0 Comments
TweetPinPrintLinkedInEmailFacebook
(adsbygoogle = window.adsbygoogle || []).push({});
The details of the Executive Order No. 10 of 2020 signed by President Muhammadu Buhari has been released by the federal government.

The order which was signed into law by the President four days ago signals the implementation of Financial Autonomy for the State Legislature and Judiciary Order of 2020.

Following the decision of the President, the legislative and judicial arms of government in the 36 states of the federation will no longer have to wait on State governors for funds.

President Buhari while speaking on the reason for his decision noted that his decision was based on Section 5 of the Constitution of the Federal Republic of Nigeria 1999 (as Amended).

See the details below:

(a) Without prejudice to any other applicable laws, legislations and conventions at the State tier of Government, which also provides for financial autonomy of State Legislature and State Judiciary, allocation of appropriated funds to the State Legislature and State Judiciary in the State appropriation laws in the annual budget of the State, shall be a charge upon the Consolidated Revenue Fund of the State, as a First Line Charge.

“2. Determination of the Budget:

Notwithstanding the provisions of any existing law, convention or regulation, other than the Constitution of the Federal Republic of Nigeria 1999 (as Amended), providing for appropriation or management of funds at the State tier of Government as follows:

(a) every State Government of the Federation shall set up a Committee from the commencement of this Executive Order comprising the Commissioner of Finance, Accountant-General of the State, representative of the State Budget Office, Chief Registrars of State High Court, Sharia Court of Appeal and Customary Court of Appeal, (where applicable), the Clerk to the State House of Assembly and the Secretary of the State Judicial Service Committee or Commission;

(b) where applicable, determine and ascertain from the Revenue profile of the State, a workable budget for each Arm of the State Government based on the request and needs of the Accounting Officers; and (c) the Committee shall be given and accorded legal recognition in the various relevant appropriation or Funds Management Laws of the States.

(c) The Chief Registrar of the State High Court is to serve as Secretary.

(d) The modalities for budget preparations and implementation shall include but not limited to the following:

(i) upon the receipt of the Budget Estimates of the Fiscal Year for the State Judiciary, the State Judiciary Budget Committee shall invite all the Accounting Officers of the various Courts/Judicial Bodies to defend their budget estimates;

(ii) the budget estimates for Courts and Judicial bodies shall be based on expenditure line items given to them by the State Judiciary Budget Committee which shall be defended before the State House of Assembly; and

(iii) upon the appropriation of Funds, the State Judiciary Budget Committee shall on a monthly basis or as the case may be, request the Budget Office of the State to release the statutory allocation for the quarter or monthly and the Authority to Incur Expenditure (AIE) shall be raised by the Office of the Accountant-General of the State for the release of the Fund to all the Heads of Courts/Judicial Bodies in line with the Appropriation Law.

(a) Without prejudice to any existing budget templates in force in any State of the federation, the State Legislature and State Judiciary shall continue to maintain the strata of line consultations, inter Arms and inter-Agency pre-budget consultations and frontloading as is done in some States.

(b) The budget templates and models in the schedule to this Executive Order shall apply to State Legislature and State Judiciary with modifications, in compliance with Section 121(3) of the 1999 Constitution of the Federal Republic of Nigeria (as Amended) and such other applicable Laws.

(a) At the commencement of this Order for implementation of financial autonomy for State Legislature and State Judiciary in line with section 121(3) of the 1999 Constitution of the Federal Republic of Nigeria (as amended), all States of the Federation shall include the allocations of the two Arms of Government in their Appropriation Laws.

(b) Where Appropriation Law exists in any State of the federation before the commencement and implementation of this Order, such States shall amend their Appropriation Law to encompass financial autonomy of State Legislature and State Judiciary.

(c) This Order expects States without Appropriation Law on the financial autonomy of State Legislature and State Judiciary to do so.

“6. Special Allocation for the Judiciary:

(a) Notwithstanding the provisions of this Executive Order, in the first three years of its implementation, there shall be special extraordinary capital allocations for the Judiciary to undertake capital development of State Judiciary Complexes, High Court Complexes, Sharia Court of Appeal, Customary Court of Appeal and Court Complexes of other Courts befitting the status of a Courts.

(b) In this section, “Other Courts” includes Magistrate Courts, District Courts, Customary Courts and Area Courts.

“7. Implementation of this Order:

(b) To the extent as may be permitted by law, the Accountant-General of the Federation shall take appropriate steps to ensure compliance with the provisions of this Order and implementation of the recommendations of the Committee, as may from time to time be made.

(c) This Order shall be implemented consistently with States applicable laws that guarantee financial autonomy of State Legislature and State Judiciary and subject to the availability of funds.

“8. Citation: This ORDER may be cited as the Implementation of Financial Autonomy of State Legislature and State Judiciary Order, 2020.

“9. Commencement: This Executive Order shall take effect from this 20th Day of May 2020.”

How We Lost Our Means Of Livelihood, Others Worth Millions Of Naira In Fire Incident – Lagos Plank Market Traders 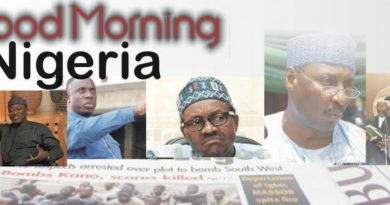 Nigerian Newspapers: 10 things you need to know this Thursday morning