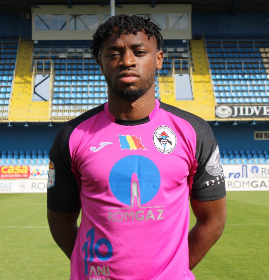 The attacking midfielder, whose father represented one of Nigeria’s traditional clubs Enugu Rangers, has put pen to paper on a two-year contract with CS Gaz Metan Mediaș, with the option to extend for a further year.

The 2001-born player was touted as one of the most promising players at the Birmingham Academy but was released at the end of his scholarship in the summer of 2019 due to an injury he suffered in his final season at St Andrew’s.

Bournemouth and Charlton Athletic explored the possibility of signing Okoro before he opted to move to Romania having undergone trials with both Football League clubs.

“I was with the youth team of Birmingham and we got to the semifinals of the FA Youth Cup in 2018,” Okoro told allnigeriasoccer.com.

“They told me the season after that if I replicate my performance in my first season as a scholar I’ll be having a professional contract. Unfortunately, due to injury I was released.

“That year, I went on trials, trialed with some professional teams in England, I trialed at Bournemouth, Charlton Athletic and one club in the Premier League but unfortunately I wasn’t offered a deal so I decided to play non-league football.

“I was contacted by an agent who has been following my career and he said the best bet for me was to move abroad, establish a name for myself and then make a move back to England, so I decided to take this opportunity.”

Okoro was supposed to trial at CS Gaz Metan Mediaș for around six weeks but was very impressive during the training sessions, so much so that he was offered a deal after only five days.

“The trial was supposed to be for six weeks but after five days they contacted my agent and said they will sign me straightaway, so I was over the moon with that – from not having a contract the year before to signing a professional deal.

“Because I didn’t come straight from a pro team, I’m going to their second team for a start and my plan is to make my debut as soon as possible.They play in the third division so it’s still professional level,” added Okoro.

CS Gaz Metan Medias, who reached the playoff round of the Europa League in the 2011-2012 season, finished sixth in the Romanian top-flight last term.