Xhaka, who has coached Nwaneri at youth level, insists talented youngster must be protected

Arsenal vice captain Granit Xhaka has hailed England youth international of Nigerian descent Ethan Nwaneri as a ‘special player’ with a big future however the Swiss midfielder believes that the 15 year-old will need to be protected amid the rave reviews coming his way.

Nwaneri made Premier League history on Sunday when he was introduced into Arsenal’s game against Brentford at the Gtech Community Stadium which the Gunners won 3-0.

The prodigy was aged just 15 years and 181 days when he was brought off the bench by Arsenal manager Mikel Arteta who admitted that he had a ‘gut feeling’ about the player after few trainings with the first team squad.

His remarkable feat meant that he beat the previous Premier League record of former Fulham starlet Harvey Elliott – who was 16 years and 30 days.

Xhaka has coached Nwaneri at youth level as he is currently doing his coaching badges with Arsenal.

“We have to check the passport first! I am joking,” said Xhaka as quoted by English tabloid The Evening Standard.

“To have a guy who is 15, who is 15 years younger than me…he looks old when I see him but the club can be proud of a player like him.”

“He has a big future, if I am honest, I am doing my coaching license and I have trained the Under-16s. You can see a big difference with him and the other guys. He is very, very special.

“Of course you have to protect him as he is very young but if he keeps going like this with his hard work he has a big, big future.

“So yes, of course, when you have 15 years difference you think: ‘Okay the time is not gone but it is on the way’. But we are enjoying him, he is enjoying us as he has the quality, ” Xhaka whose leadership role at the north London side has been evident under managers Arsene Wenger, Unai Emery, Freddie Ljungberg and Arteta disclosed.

Nwaneri, his studies permitting, could be involved in more youth competitions for the Gunners as well as the Carabao Cup and FA Cup commitments.

“If I am honest, he is not with us a lot in training. I have maybe seen him twice or three times now. But he is very shy, of course, but the time will come when he will be more with us, but you have to protect him and help him.

“Football is not everything for him and for us but yes, the club will help him and the experienced players have to help him,” Xhaka concluded.

All rights reserved. This material, and other digital content on this website, may not be reproduced, published, rewritten or redistributed in whole or in part without prior express written permission from allnigeriasoccer.com Onuachu, Owubokiri and the highest-scoring Nigerians in a single season in Europe’s top ten leagues 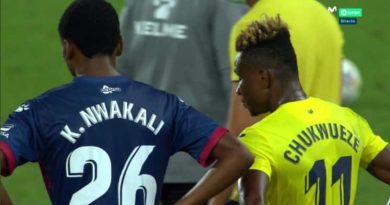