Have you ever heard a woman hating her womanhood? I have. They must be around us and they might be able to express their feelings here in the western worlds we live in. In Iran, there are many women who hate their womanhood and they do not have a voice. They might have many reasons for their feelings, yet, they are unable to identify the hatred toward their own gender.

I will try to be their voice now.

Recently I met a lady who has newly immigrated to Canada. The conversation I had with this lady impacted me deeply and made me to write this article. I found this woman an authentic human being who cares for human life. She left Iran one year ago with the hope to give her two adult children and her family a chance to breathe freedom.

I met this lady over in an unplanned setting. I happened to be in the same place she was and we basically had a regular woman conversation about the reasons why we Iranian leave Iran. a new immigrant she started to tell me about the adjustment challenges here and the concerns she had in finding work like many others. I asked her what she did back home. She said as a midwife. Then she added that her working environment back home was quite hard and she could not do it any more.

This little conversation soon gave her a chance to tell me stories of her reality back home. Stories that were part of everyday life in that city she comes from.

She said that she has worked past 14 years as a midwife in a city north of Iran. She started depicting all those women who are in extra affairs with married men who are hungry for extra sexual relationship and who are fantasizing a lot. She continued describing how these usually young women are abused and exploited for little money. Some of these women have no choice she said, they do this for the financial support they receive from these men. These young women sometimes have several men to serve at the same time, since these men can afford to have extra lovers while they are authorities who preach on morality and a just society. My midwife friend would see these women once they came to ask for advice on illegal abortion or anyway they could get rid of unwanted pregnancies.

As she was talking, I kept thinking, I would not call these women prostitute, although this is what they do, they sell their bodies for money. However, the circumstances around why these women do this are totally different from the issue of prostitution in the West. Not that we want to glamorize these women, no, women in those extra affairs usually have no choice or no voice. They do this for financial reasons sometimes to feed a family of their own. However this article is neither about the complex issue of prostitution nor about the dangerous life do these women live within.

No this article is about the experiences of a midwife who have seen hundreds of cases, where young under age girls were brought to her because they were pregnant, an act that brings disgrace to the family and to the community they lived in. Our midwife added that the controversy about abortion is much more complex in Iran than anywhere else. Young teenage girls are not supposed to have sex and if this is known they could be sentenced to death or harsh consequences. However, she knew that these girls did not have any consented sex and they were mostly raped, abused, or forced to sexual activity by some one.

In one case our midwife recalls she was contacted by a woman who asked for an appointment. One hour later she came back with her 15 years old daughter who complained about not having her menstruation. Our midwife could right away after a regular examination say that she was pregnant carrying a six month old baby. This young girl started crying and denying, while the belly was sticking out and the reality could not even be denied. Our midwife tried to find out who is the father and how is that she has not told anyone. The young girl whose paled face indicated neglect and deprivation whispered to her ears that it was her brother. Our midwife knew if this story goes out both brother and sister could be sentenced to death. She referred this mother to another midwife who has an in-home clinic where she performs several abortions every week. This colleague to our midwife who is running this secret clinic endangers her life for helping these young girls who have no where to go.

Our midwife says she feels bad for all these young victims of sexual abuse and rape.

These are all young girls who were used and abused by men around them and now that they carry a baby, no one is out there to support them. What happens is that these young girls some at age 13-14 or 15 has to find out someone who wants to help them to wipe out the evidence of a sexual act that they were forced to.

Our midwife said that she hated her womanhood every time she had a client in that age, young beautiful girls who were sexually abused, raped, exploited, while they had no voice. All in all these girls and their mothers usually have to keep this horrible act of crime secret because they live in a system that victims are blamed in any case. She said that our young girls in some families and communities in Iran are raped easily and no one is there to protect them. Those who try to seek justice they might be doomed to death sentence because according to the laws sex before marriage is a sin. At this moment, our midwife was red in her face and she wiped her tears while she explained that she has witnessed many young pregnancies that had to end in dangerous life threatening situations.

She added that she has seen hundreds of cases of young girls who were raped and sexually exploited by their brothers, fathers, uncles, and someone else in the family. However, she never could share this information with anyone. Now that she is in Canada she hopes to find a job that has nothing to do with her past. I asked for a number and she said I was only one midwife and there are many others around the country. She was sure that the number is much higher than it can be conceptualized. This is a harsh reality back home that no one can deal with it because our nation is fed with ideology instead of education, she added.

I think of these brave midwives who risk their life and income while they are left out to decide what to do with these young girls, our children who are left out with no support, our children who are supposed to be children and grow up in a thriving environment. After this conversation I really felt numbed, shocked, and in rage. Why are we Iranian doomed to a situation like this? We see the problem still, we can not do much for it, we have no cure for it. What have we done to deserve such a horrible situation where our families are left out with no education, no rights, no support, and no voice?

How come our home country, Iran, is left out in such darkness where life is a taboo and death is appreciated?

I guess there are many of us who wonder about the same thing? When are we supposed to see our home country and our people thrive? I am not sure. We are not sure?! Actress Juliet Ibrahim Celebrates Her Son As He Clocks 10 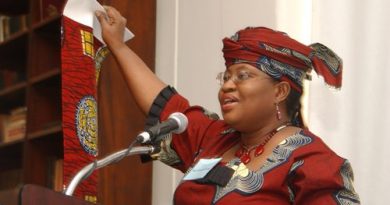 Ngozi Okonjo-Iweala – A Perfect Fit For The WTO