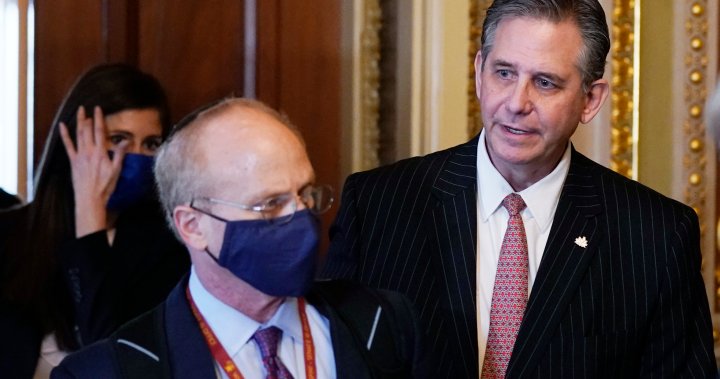 Donald Trump’s lawyers have a simple objective as they open their defence at the former president’s impeachment trial: Don’t lose any Republican votes.

Most Senate Republicans have indicated that they will vote to acquit Trump on the House charge of incitement of insurrection. They argue that the trial is unconstitutional and that Trump didn’t incite supporters to lay siege on the U.S. Capitol on Jan. 6 when he told them to “fight like hell” against the certification of President Joe Biden’s victory. If Republicans hold the line, Democrats will fall well short of the two-thirds of the Senate needed for conviction.

Read more:
Trump’s defense team to wrap up impeachment argument in a day or less

Trump’s two top lawyers, Bruce Castor and David Schoen, risked losing one Republican vote on Tuesday after Louisiana Sen. Bill Cassidy said they did a “terrible” job arguing that the trial is unconstitutional. Cassidy, who had voted with his party two weeks prior to stop the trial, switched his vote to side with Democrats.

Including Cassidy, six Republicans sided with Democrats on that vote that the trial is constitutional — far from the minimum of 17 Republican votes that would be needed to convict.

Here’s what to watch for on Friday as the defence opens arguments in Trump’s historic second impeachment:

Trump’s lawyers plan to argue their client’s innocence on multiple fronts. Their main arguments include that the trial is unconstitutional, that the insurrectionists who broke into the Capitol did so on their own accord and that Trump’s rhetoric to supporters was common political speech protected under the First Amendment.

Hoping that brevity will appeal to their restless Senate audience, the lawyers are expected to keep their arguments short. A Trump adviser said Thursday that they are expected to wrap up their defence in less than a day.

Like the House prosecutors, Trump’s lawyers have up to 16 hours over two days to plead their case. Once the defence’s presentation is finished, senators will have time to submit written questions to both sides.

Taking a cue from their client, Trump’s lawyers have injected searing criticism of Democrats into their arguments, hoping to convince not only GOP senators but also viewers of the trial around the country that Trump’s second impeachment is fueled by “hatred” of the former president. They are expected to continue with that strategy on Friday, calling out Democrats they say similarly incited violence in cities around the country.

Schoen told reporters in the Capitol on Thursday that Democrats’ recounting of the riots on Wednesday — almost 90 minutes of brutal footage that saw the rioters injuring law enforcement and calling for the death of the vice-president and the speaker of the House — was “offensive.”

He said he believed Democrats were effectively making the public relive the tragedy in a way that “tears at the American people” and impedes efforts at unity.

All eyes will be on Castor, who delivered a rambling argument on Tuesday that Republican senators criticized as perplexing, “disorganized” and “random.” Trump, too, was furious over the performance of his defence team as he watched the proceedings from his Mar-a-Lago club in Palm Beach, Florida, according to a person familiar with his thinking who spoke on condition of anonymity to describe a private conversation.

On Friday, Castor will get a second chance. After the Democrats’ video presentation on Wednesday, he said the images “would have an emotional impact on any jury, but there are two sides of the coin and we haven’t played ours.”

At least one key senator had advice for the lawyers on Thursday.

Maine Sen. Susan Collins, a Republican who has been harshly critical of Trump’s role in the riots, said she hopes Trump’s lawyers will be “as specific as the House managers were — who went through the evidence, provided legal arguments and gave a very thorough presentation.”