In this piece, Elder statesman and legal icon, Professor Ben Nwabueze, SAN, writes on the state of the nation, how the constitution is being subverted and why and how Nigeria’s democracy can be deepened.

On subversion of the EFCC Act and the Constitution

The statement by the Vice-President that “(Ibrahim) Magu will be EFCC chairman as long as Buhari and I remain in office” is thus a manifest subversion of section 2(3) of the EFCC Act. Magu was in fact kept as EFCC acting chairman for four and half years without Senate confirmation; his tenure of the office for those years is illegal, a gross manifestation of personal rule.

Subversion of the constitution

In all the cases under the Constitution where the approval of the Senate is required for a proposed appointment by the President, the approval is a condition for the validity of the appointment; the appointment cannot take effect without the approval. The deployment of any members of the armed forces on combat duty outside the country must be approved by the senate in advance (s.5(3)(b).

The appointment of various categories of public officers requires the prior or subsequent approval of the senate to be effective. Three formulas are employed. In the case of ministers, the president first makes nominations which, if confirmed by the senate, are then finalized by formal appointment by the president (s.147(2). The Senate must make a response to the nominations within twenty-one days of receiving them or else the appointments will be deemed to have been made (s.147(6).

It seems that this provision is satisfied if a nomination, without being confirmed or rejected, is merely returned for more information. For the second category of officers, ambassadors, high commissioners or other principal representatives of the country abroad, it is provided that their appointment by the president shall not take effect unless it is confirmed by the senate (s. 157(4). The appointment is first made by the president but its effect is postponed pending the senate’s approval. The third formula permits an appointment to be made in the first place by the president with immediate effect, subject to subsequent confirmation by the senate.

It is provided that where any authority or person has the power to make, recommend or approve an appointment to an office, such power shall be construed as including the power to make, recommend or approve a person for such appointment, whether on promotion or otherwise, or to act in any such office (s. 277[2]). The power given to the president to appoint an acting auditor-general (s. 80[2])is thus subject to senate approval like the substantive appointment itself. The provision does not, however, apply to the appointment of a person to act as Chief Justice of Nigeria or president of the court of appeal, because of the specific provision that, without the approval of the senate, it shall cease to have effect after three months (ss. 211[4] and [5] and 218[4] and[5]).

The provision relating to the auditor-general says that he shall be removed from office by the president upon an address by the senate praying for his removal s. 81[2]). In all these cases the address of the senate praying for removal must be supported by a two-thirds majority of its members and be based on the ground of inability to discharge the functions of the office (whether arising from infirmity of mind or body) or misconduct.

What, then, is the rationale in a constitutional democracy for requiring senate approval for the appointment or removal by the president of certain important or strategic state functionaries, like the chairman of the EFCC?

On the democratic rationale for requiring Senate approval for certain appointments or proposed appointments “Checks and balances” is a device whereby in a constitutional democracy the legislative assembly is enabled to check the exercise by the president of the enormous power vested in him to appoint or remove important or strategic state functionaries. The device has not escaped criticism.

According to Professor Charles Mcllwain, the president’s election is a mandate for him to govern, and to choose his principal assistants. He has full responsibility for his choice, and that responsibility he owes to the electorate that gave him the mandate. Accordingly, his ability to create a working administration as speedily as possible should not be fettered by the interposition of senate approval.

“Among all the modern fallacies that have obscured the true teachings of constitutional history,” he says, “few are worse than the indiscriminate use of the phrase “checks and balances.” He maintains that the only restraints necessary for constitutionalism are the ancient legal restraint of a guarantee of civil liberties enforceable by an independent court and the modern concept of the full responsibility of government to the whole mass of the governed”.

The criticism misses the point about the purpose which senate approval is intended to serve. The conferment by the electorate of a mandate to govern in no way implies that the public should no longer be concerned about the way the mandate is exercised. It is of the essence of constitutional democracy that the light of public scrutiny should at all times be focused on the exercise of executive power by the president.

And for this purpose the senate is the “public eye” for ensuring that the appointment of the president’s principal assistants conforms to the standards of integrity, competence and national interest required for the efficient management of the nation’s affairs. Apart from the scrutiny of the character and suitability of the persons for ministerial and other strategic appointments, the check also enables the Senate to ensure that such appointments comply with constitutional provisions prescribing qualifications and disqualifications for such appointments, and that, as directed by the Constitution, it reflects the federal character of the country.

The president may well lose sight of these in a desire to favour friends or to satisfy pressure from party leaders. There is, of course, nothing in the Constitution to prevent the president from re-submitting a name earlier rejected or the senate from reversing an earlier rejection if it is satisfied, on the basis of fresh information, that the earlier decision had been wrong, but a reversal is not to be lightly made if the senate is to retain credibility with the public.

The requirement of approval by the senate of certain acts of the president tends sometimes to be misunderstood. Its effect is not to subordinate the president to the senate, for it neither divests him of discretion in the exercise of the power in question nor makes the function a joint responsibility.

Implications of keeping Magu in office without Senate confirmation

Ibrahim Magu was appointed by President Buhari as Chairman of EFCC in an acting capacity on 9 November 2016, and his appointment was sent to the Senate for confirmation but was twice rejected, based on an adverse report by the Department of State Service (DSS) which impugned his credentials as a person unfit for the appointment.

But instead of sending another person to replace him the Vice-President Professor Osibanjo, was reported to have said: “Magu will be EFCC chairman as long as Buhari and I remain in office.” Coming from an esteemed constitutionalist, this is an incredible thing to say. The statement amounted to a defiance not only of the command of the Constitution requiring the approval of the Senate for everyone to occupy certain important or strategic offices in the state (see section 147), but it is also a defiance of the decision of the Senate which twice rejected the appointment of Magu for weighty enough reasons. The statement is also a repudiation of the cogent reason, as stated above, for requiring Senate approval for important, strategic appointments.

And so it happened that, for nearly four and half years, Magu functioned, albeit in an acting capacity, as chairman of EFCC without Senate approval. The implication, from the legal standpoint, is that the President and Vice-President who enabled him to so act and who defiantly stood by him while he was so acting are vicariously liable for his acts. Indeed, their liability is more than a vicarious one; by standing defiantly behind him for nearly four and half years while he did those acts, they are directly liable; it is as if they did the acts by themselves directly.

Professor Mahmood Yakubu was reappointed chairman of INEC by President Buhari in October 2020 and his appointment expired on the 9th of November, 2020.

As he stated on 9th November 2020, “the renewal of my tenure as Chairman of the Commission has been announced, subject to confirmation by the Senate. Our work as election managers requires us to enforce the law, regulations and guidelines.

In doing so, we must demonstrate strict respect for, and compliance with, the Constitution of Nigeria and subsidiary laws. Consequently, it will be inappropriate for me to remain in office beyond today, 9th November 2020, without confirmation by the Senate and swearing to another oath of office as provided by law.

Pending the conclusion of the statutory process, the remaining National Commissioners have resolved that AVM Ahmed Mu’azu (rtd) will oversee the affairs of the Commission. It is therefore my pleasure to hand over to him in the interim.” Professor Mahmood must be commended for not perpetuating the illegality of elongating his tenure after its expiration without Senate confirmation.

Woman who was mocked for not having a child after years of marriage gives glory to God as she welcomes a baby boy; reveals WhatsApp chat where someone was mocking and insulting her for not having children 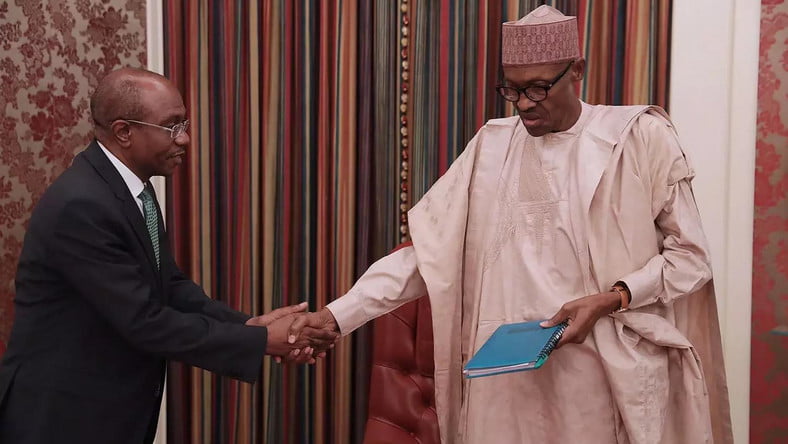