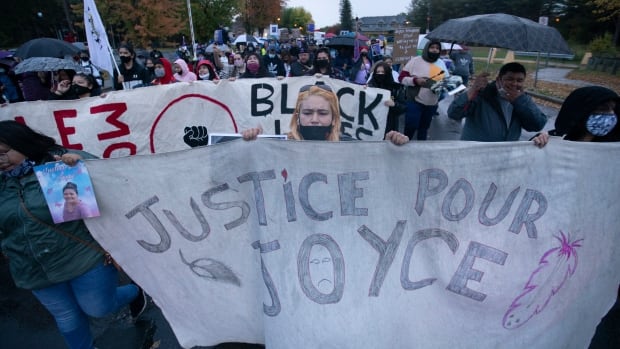 Efforts have been made for over a decade to get an Indigenous health centre in the city but an advocate for the centre says a lack of political will and jurisdictional barriers have been major challenges.

“Enough with the rhetoric,” said Harvey Michele, president of the Indigenous Health Centre of Tiohtià:ke’s board of directors.

“We need action. What we need are constructive, concrete actions.”

The centre launched a petition and issued an open letter to Quebec premier Francois Legault and Prime Minister Justin Trudeau following the death of Joyce Echaquan. The 37-year-old woman from the Atikamekw community of Manawan, Que., died in a hospital in Joliette, Que., last month after recording medical staff hurling racial slurs.

He and other Indigenous people in Montreal have been advocating for such a health centre in Montreal since 2008. It stemmed from a project through the Montreal Indigenous Community Network’s health committee, and in 2016 the body incorporated as a separate organization.

However, they’re still without a physical space, programming, or staff. The board of directors are volunteers, and Michele said securing core funding has been a struggle. Some of the challenges, he said, are a lack of political will from various governments and jurisdictional disputes about who is responsible for urban Indigenous populations.

“They are closing their eyes on us,” said Michele about “key decision makers” they’ve approached at municipal, provincial, and federal government levels.

“We are asking for some core, even some seed money to get this building started and then we can lead our own people and operations of the clinic. We have a right to health, access to health.”

The Truth and Reconciliation Commission’s 94 calls to action include recognizing, respecting, and addressing the distinct health needs of the Métis, Inuit, and off-reserve Indigenous peoples.

The national inquiry into missing and murdered Indigenous women and girls also called on all governments to provide adequate, stable, equitable, and ongoing funding for Indigenous-centred and community-based health and wellness services.

Quebec’s Viens Commission, which looked into treatment of Indigenous people by the public service, echoed similar recommendations for sustainable funding for services and programs based on cultural safeguard principles developed for Indigenous peoples.

In the short term, the Indigenous Health Centre of Tiohtià:ken intends to fill the gaps in the delivery of culturally sensitive and holistic health services to the urban Indigenous population. But its long term goal, based on a two-year needs assessment study, is the creation of a fully functional holistic Indigenous health centre.

Montreal is one of the few large Canadian cities without such a centre. In Ottawa, the Wabano Centre opened its doors in 1998.

“I don’t think we would ever meet the goal of providing culturally appropriate care if we did not have a centre that is led and governed by Indigenous people,” said Allison Fisher, executive director at Wabano.

“We are the only people that can understand how it is that we help our people through their wellness journey… We know very well what is good for us. We know that culture is our medicine.”

Fisher said it was a slow process to get where Wabano is today. It started with a group of women sitting around a kitchen table deciding to write a government proposal in the wake of Ontario’s first Indigenous health policy.

It had to leverage what government money it received for more funding, writing proposals to anything they qualified for, finding volunteers to write proposals until they were able to hire consultants to write them. Fisher said a decade was also spent networking prior to a fundraising for a successful capital campaign.

“You need a spark at the beginning,” she said.

“Either the government comes through with at least a base, or you need to find someone that’s in the strategic PR sector that can allow people to think, OK, this is the kind of strategy that you have to use in order to get from A to B.”

Minister of Indigenous Services Canada Marc Miller’s office said in a that statement providing quality, culturally safe health care to Indigenous people to address gaps in health care is a priority. It said the federal government hosted a meeting on Oct. 16 to listen to the lived experiences of Indigenous peoples and health care professionals on systemic racism in federal, provincial and territorial health systems.

“We recognize that one meeting will not solve the deep-rooted systemic racism in Canada’s health care system. This is just one step in what is going to be a very long road,” said Adrienne Vaupshas, press secretary for the office of the Minister of Indigenous Services.

“While the federal government does not have the unilateral jurisdiction to implement all the changes needed, we do have the moral obligation to call out racism in all its forms, to bring together all levels of government to ensure proper surveillance, access and accountability, to ensure that the regulated medical profession work to stamp out systemic racism, to ensure that Indigenous Peoples are represented in the medical professions and that the federal government uses its legitimate power in spending in these areas to make sure these goals are met.”

“We recognize the importance of health care centres for Indigenous people in urban areas and we will continue our discussions on a regular basis with all the different stakeholders so we can act on the field, with concrete actions, and answer the Viens commission’s calls to action,” said a spokesperson for Lafrenière’s office in a statement.