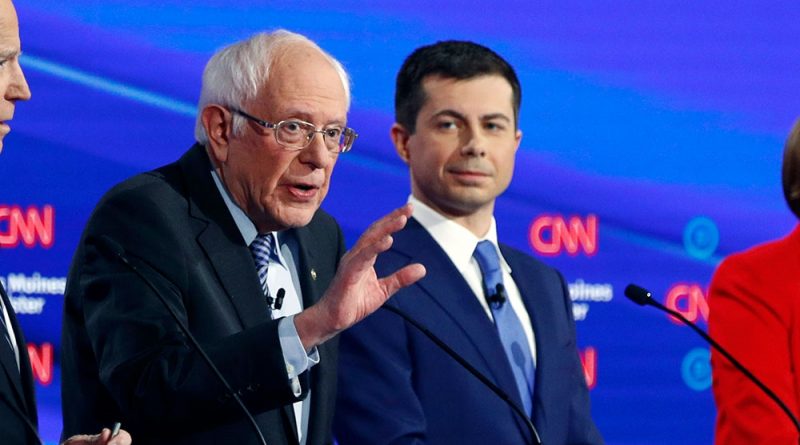 The primary follows the chaotic Iowa caucuses, after which the two top candidates – Senator Bernie Sanders and South Bend, Indiana, Mayor Pete Buttigieg – called for a recanvass of the results.

Registered members of either party in New Hampshire can only vote for their own candidates, whereas independent and undeclared voters can vote in either primary.

While no clear favourite has emerged, Sanders appears to have the most momentum in the polls, with Buttigieg in second place and a number of others, including Senators Elizabeth Warren and Amy Klobuchar and former Vice President Joe Biden, trailing behind. 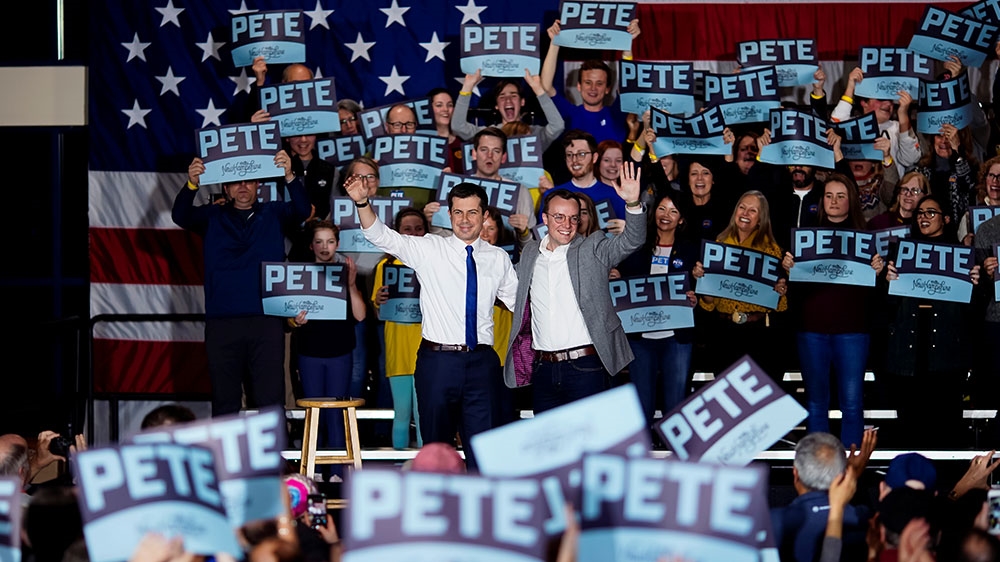 “I’m teetering between Amy, Pete and Elizabeth,” said Niki Navarro, a hostess at a busy restaurant in downtown Manchester.

She told Al Jazeera that “watching their presence in interviews” would help her decide just before voting, and that healthcare was her most important issue.

Navarro also said she would support “whoever will be good enough to go up against Trump”. 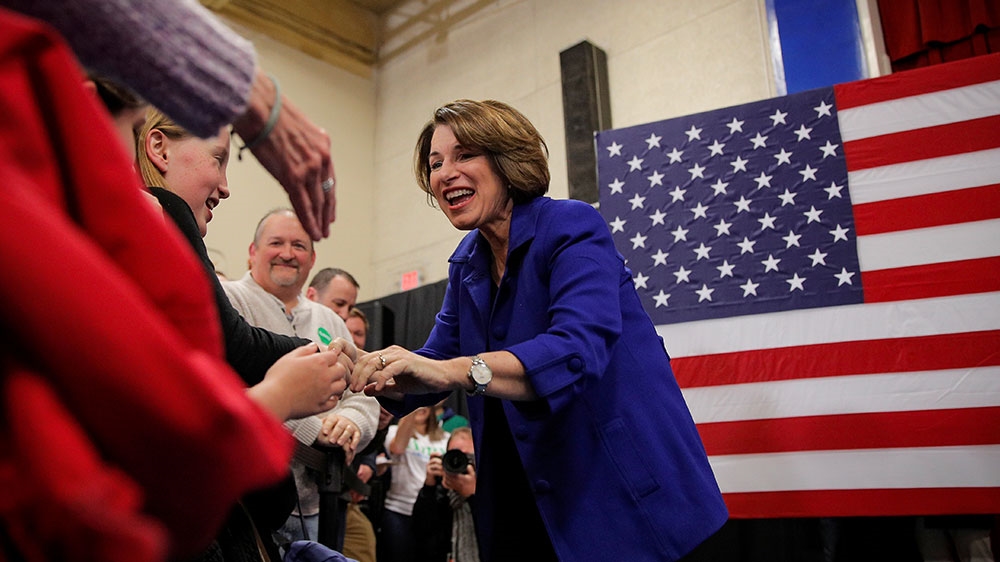 “This is the first vote he will ever cast,” Hebert said, describing how her son Harrison is voting for Sanders.

With a primary that historically has predicted the eventual nominee only half the time, a win in New Hampshire is not the be-all-end-all.

Meanwhile, half of the state’s voters reported being undecided, with some embracing candidates not in the top tier.

Tom Smith, a voter from Hillsboro, said he would vote for Democratic Hawaii Congresswoman Tulsi Gabbard because “she fits into a maverick type of a profile”. 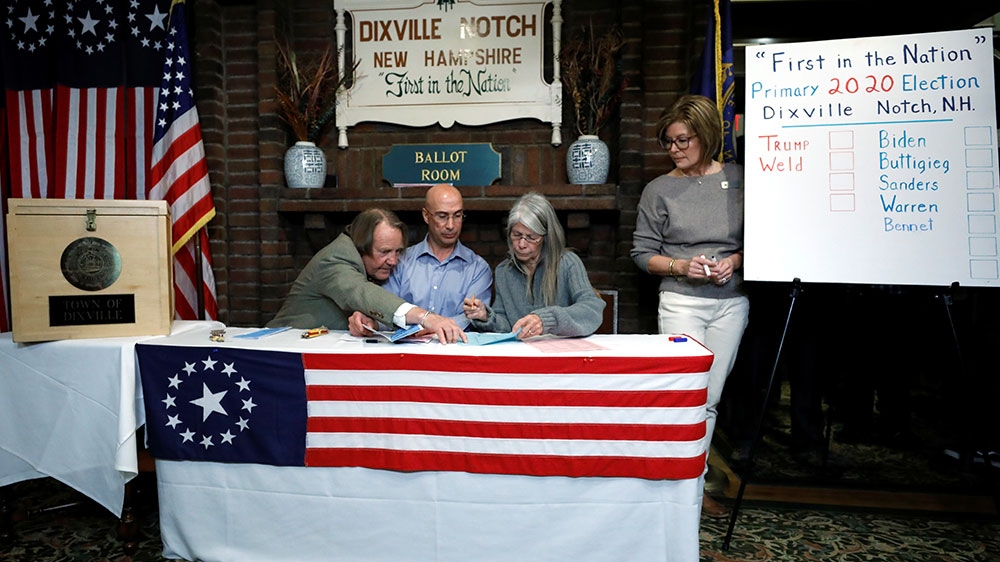 The small town of Dixville Notch, New Hampshire, is traditionally the first town to open the polls in the state [Brendan McDermid/Reuters]

Considering himself a “fierce independent”, he technically has the option of voting in either the Democratic or Republican primary.

“We bleed politics,” Smith told Al Jazeera, pointing to the Campaign Manager 2008 board game he was playing with his son to share “good memories” of the US presidential election 12 years ago.

“[Gabbard] supports Medicare for All. She has a military background but supports nonviolence and anti-interventionism,” he added. “These are all winning issues.”

Tuesday’s weather brings a wintry mix to freezing roads, so some commentators have suggested Democratic voter turnout could be adversely affected.

“I’m from New Hampshire,” Smith said. “If the weather stopped me from doing anything, then I wouldn’t be able to live.” 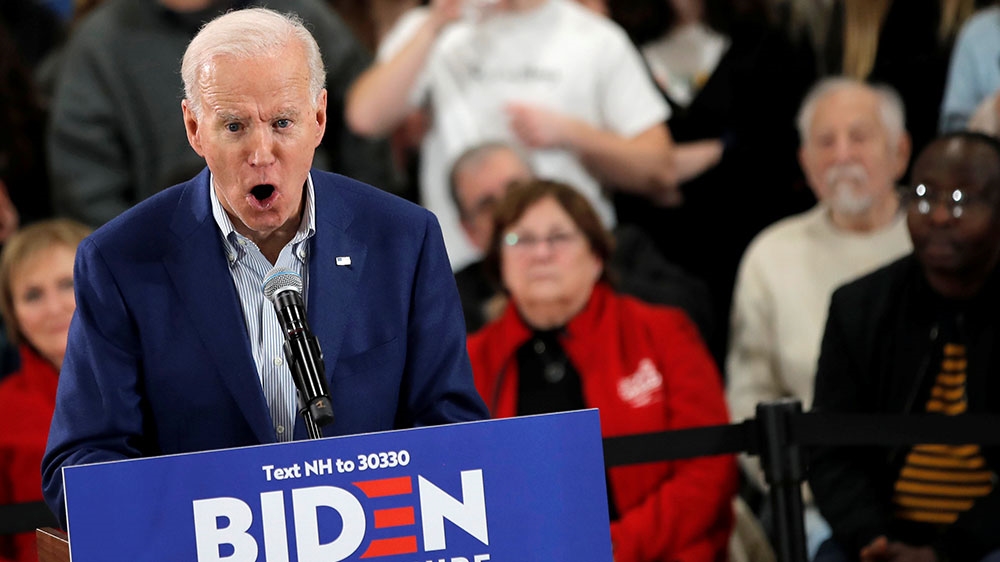 On Monday, the chairman of the state Democratic Party expressed confidence in the prospects of overcoming the incumbent in November.

“His ego can’t stand the idea of something going on and he’s not in the middle of it,” Raymond Buckley told reporters, referring to Trump’s Manchester visit on Monday night. “It has backfired on him before, and I believe it’s going to backfire on him this time.” 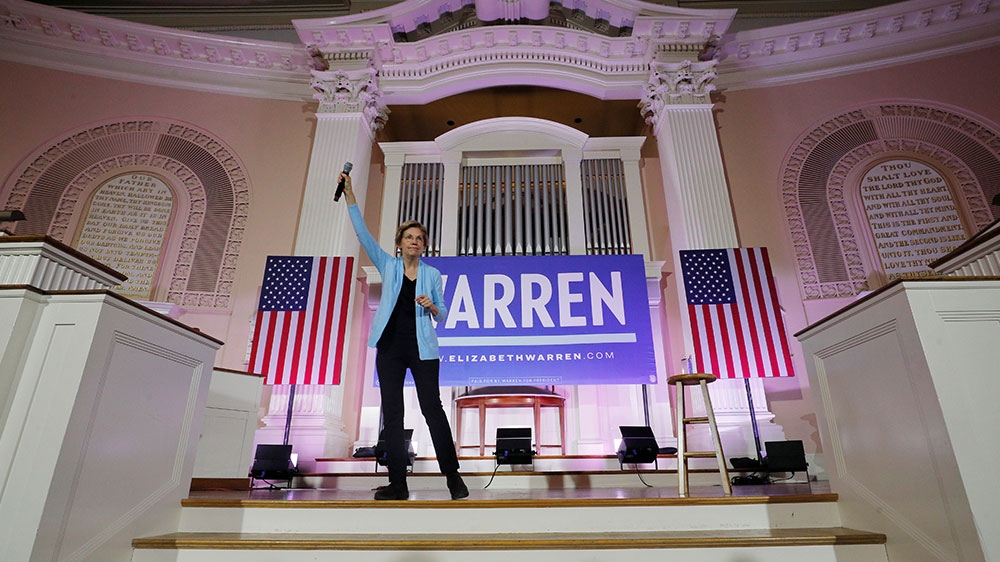 A prolonged and bitter contest between moderate and left-leaning Democrats could buttress Trump’s re-election chances in November.

The Republican primary in New Hampshire may be just a formality, as Trump looks to assert his dominance over the party’s rank-and-file voters and extend a post-impeachment victory lap.

Hoping to upstage his rivals and stay in the limelight, Trump’s mission on the eve of Tuesday’s primaries in the state was also to highlight fractures within the opposition.

“We are in the midst of a great American comeback,” Trump said. “Our country is stronger than ever before.” 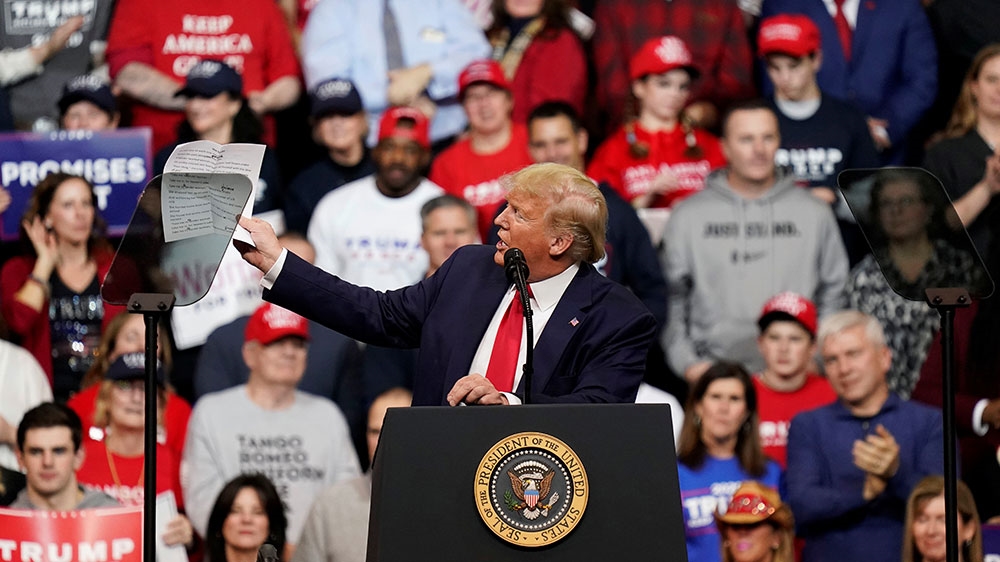 Trump speaks at a during a campaign rally in Manchester, New Hampshire [Rick Wilking/Reuters]

Robert Dyer, a former naval contractor, attended the Trump rally – his first – at the SNHU Arena.

“What’s going on in the Democratic party?” he asked rhetorically. “With all the things [Trump] has done and the promises he’s kept, he should be easily re-elected.”

“The Dems have the same issue that Republicans had the last time,” he told Al Jazeera. “They have too many people. But they don’t really have a frontrunner.”

Most polls close in New Hampshire at 7pm local time (00:00 GMT). Early results are expected to begin rolling in as soon as polls close.