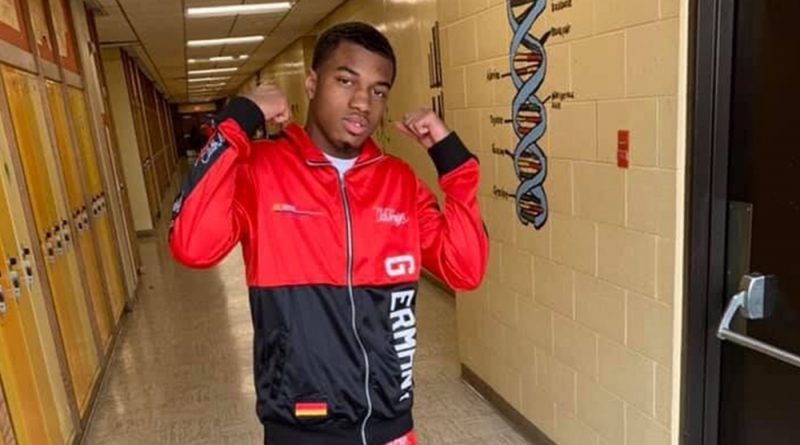 The mother and sisters of a Black teenager who was killed by a suburban Milwaukee, Wisconsin, police officer were arrested this week during a curfew-defying protest against a decision not to charge the officer with Alvin Cole’s death.

Cole’s mother, Tracy Cole, was arrested around 8:30pm local time (00:30 GMT) on Thursday “for peacefully protesting”, their lawyer Kimberley Motley tweeted, and taken to hospital with injuries to her arm and forehead.

“I’m Mrs Cole, Alvin’s mother,” Tracy Cole can be heard shouting repeatedly as officers pulled her out of her car, according to a Facebook livestream that captured part of her arrest. “I can’t believe y’all did this to me. Y’all killed my son,” she shouted at the officers.

The arrests come amid two straight nights of protests in the town of Wauwatosa, Wisconsin, which were sparked after prosecutors decided not to charge police officer Joseph Mensah with Cole’s death in February.

They arrested Tracy Cole for peacefully protesting tonight! She ended up in the hospital – more to follow 🙁

The 17-year-old’s death sparked protests all summer in Wauwatosa, a city of 48,000 just west of Milwaukee.

The demonstrations played out against a backdrop of protests worldwide over the death in May of George Floyd, a Black man who died after a white Minneapolis police officer pressed a knee on his neck for nearly eight minutes.

Floyd could be heard on cell phone video saying, “I can’t breathe”, which became a rallying cry for protesters.

In Cole’s case, the Wauwatosa police commission is under increasing pressure to discipline Mensah, after an independent investigator recommended that Mensah be fired for the fatal shooting.

The commission’s next scheduled meeting is October 21, but Milwaukee County Supervisor Shawn Rolland, who represents parts of the city, called for the panel to meet next week.

“Helicopters are circling above us, the National Guard is deployed on our streets, a curfew is preventing us from walking outside in our own yards, businesses are boarded up, there’s broken glass on our streets, families are marching and mourning the loss of their loved ones, police officers are at risk and none of us know what tomorrow will bring,” Rolland said in a statement.

“If this commission can accelerate its deliberative work, our people, businesses and neighbourhoods can begin to heal faster.”

The city was under a 7pm curfew on Thursday after Milwaukee County District Attorney John Chisholm announced a day earlier he would not charge Mensah with the shooting death of Cole.

According to investigators’ reports, Cole had a gun and fired it before he was fatally shot outside a local mall in February. Chisholm said the teenager appeared to have shot himself in the arm, and officers alleged Cole refused their orders to drop the gun.

Motley, the family’s lawyer, has said she plans to file a federal lawsuit against Mensah.

Meanwhile, the police commission’s lawyer, Christopher Smith, said the panel will abide by a schedule it adopted in August for the case.

The deadline for parties to submit witness lists in preparation for a hearing is October 28, he said, which means the earliest the commission could issue a decision would likely be in November.

“The (commission) will not – and legally cannot – deliberate on this matter until such time that both parties have an opportunity to present witnesses and other evidence,” Smith said in an email to The Associated Press news agency.

“Any suggestions to the contrary only serves to confuse the public and further inflame what is already a tense situation in Wauwatosa.”

Cole’s death was the third fatal shooting that Mensah was involved in over the past five years.

Mensah fatally shot Antonio Gonzales in 2015 after police said Gonzales refused to drop a sword, and a year later, he fatally shot Jay Anderson Jr as he sat in a parked car. In the latter case, Mensah said he believed Anderson Jr was reaching for a gun on the passenger seat.

The officer was not charged in either shooting.

The Wauwatosa Police and Fire Commission suspended Mensah in July and asked former US Attorney Steven Biskupic to determine whether Mensah should be disciplined for Cole’s death.

Biskupic recommended the commission terminate Mensah, calling the risk of a fourth shooting too great. Biskupic also faulted Mensah for speaking publicly on radio programmes, as well as to local and national news outlets, about the shooting.

Hours after Biskupic released his report, Chisholm announced he would not charge Mensah because he said Mensah would be able to successfully argue that he acted in self-defence.

Wauwatosa Police Chief Barry Weber subsequently tweeted that his department “concurs” with the prosecutor’s decision, but “hears the message” from the public.

He said an internal review is continuing and that Mensah remains suspended. The department has taken steps to improve policing, Weber added, including more training and posting its policies online, and would require officers to wear body cameras by January.

Why A Good Public Official BRINGS People Together?

The Role of Islamic Finance in Economic Stability and Social Justice