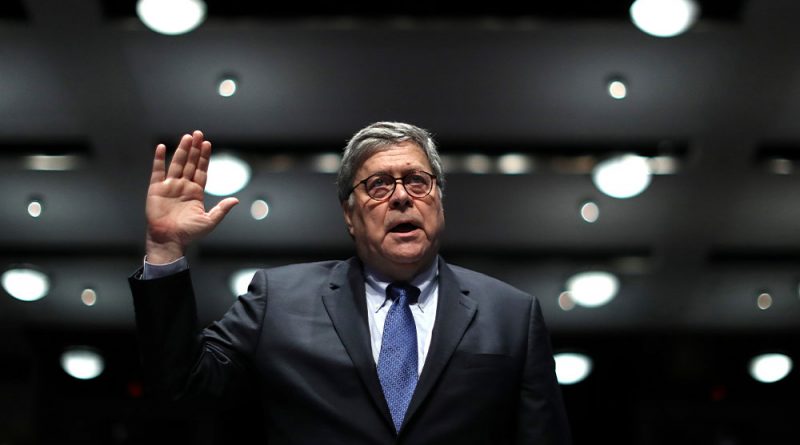 “These peaceful protests in many places are being hijacked by a very hardcore group of instigators, violent instigators,” Barr said in his first appearance before the US House of Representatives since taking office in February 2019.

“They become violent and the primary direction of violence is to injure police. Police casualties far exceed anything on the civilian side,” Barr said. 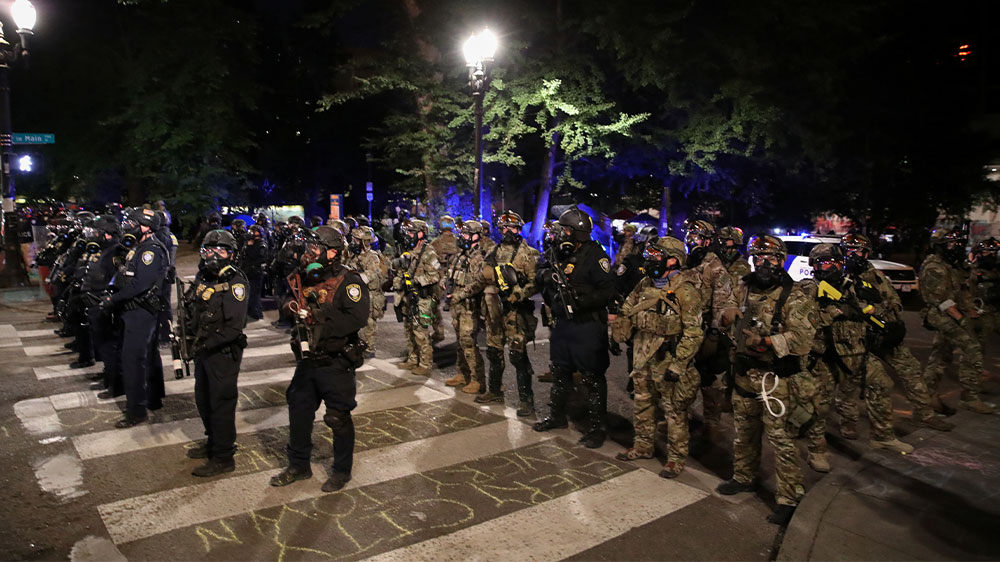 Federal law enforcement officers block off a street after clearing protesters from the area during a demonstration against police violence and racial inequality in Portland, Oregon [Caitlin Ochs/Reuters]

In a contentious five-hour hearing, Barr depicted protests at a federal courthouse in Portland, the 26th largest US city, as a siege. Demonstrators gather nightly in an escalating standoff with federal agents barricaded inside to defend the building from attempts to set it on fire, Barr said.

Attackers in Portland mix with political protesters, aim lasers at the eyes of US officers defending the courthouse, fire steel projectiles using slingshots, and – dressed in black – swarm officers attempting to make arrests, Barr told the House Committee on the Judiciary on Tuesday.

Democrats accused Barr of condoning unconstitutional arrests of peaceful protesters who have been exercising their rights to speak out against police killings of unarmed Black men and women. 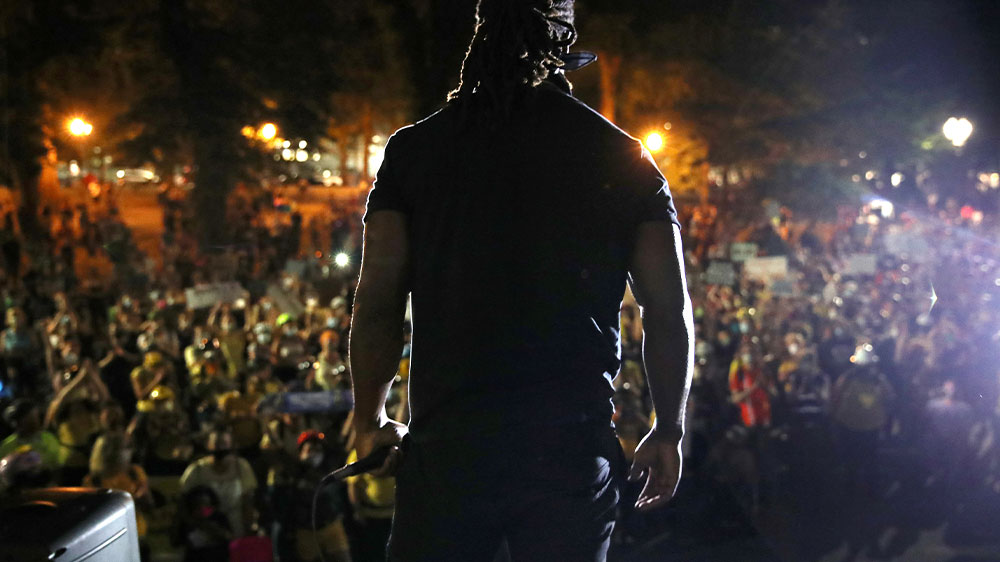 Black activist Myke Tavarres speaks to the crowd during a protest against racial inequality and police violence in Portland, Oregon [Caitlin Ochs/Reuters]

“Most of the protests have been peaceful. You know that,” said Representative Debbie Mucarsel-Powell, a Democrat. “You are just using language for political purposes.”

Democrats said that by escalating confrontations between federal officers and protesters, Barr is helping Trump divide the nation ahead of November’s election.

Demonstrations in Portland and elsewhere in the US began in May after the death of George Floyd, a Black man who died in Minneapolis police custody. The Portland protests continued through June.

Beginning in early July, despite opposition from local authorities, federal officers from US agencies deployed in tactical gear to Portland, where they began pulling people off the streets into unmarked vans and interrogating them.

Barr told the House panel the violence in Portland is fomented by left-wing, “antifa” or antifascist groups and would “metastasize” to other US cities if the federal government does not take a stand. Barr said he does not believe there is “systematic racism” in most police departments across the US even though Blacks are killed by police at a disproportionate rate. 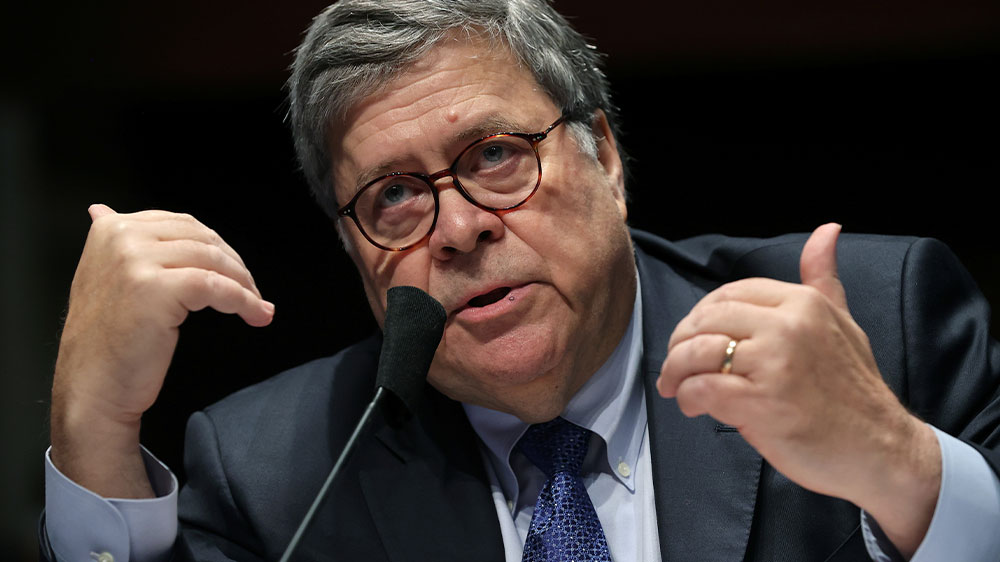 “You seem to have a difficult time understanding systematic racism and institutional racism that has plagued so many,” said Representative Sheila Jackson Lee, a Democrat who is Black.

Barr and Trump have announced plans to send additional federal law enforcement forces to other US cities. The Department of Justice (DOJ) Inspector General is investigating the confrontations between federal forces and protesters.

Democrats, who control a majority in the US House of Representatives, accused the Republican attorney general of improperly using his position as the top US law enforcement official to help Trump politically.

“You have aided and abetted the worst failings of the president,” said Representative Jerrold Nadler, the Democratic chairman of the Judiciary Committee.

“Again and again, you personally have interfered with ongoing criminal investigations to protect the president and his allies from the consequences of their actions,” Nadler said. 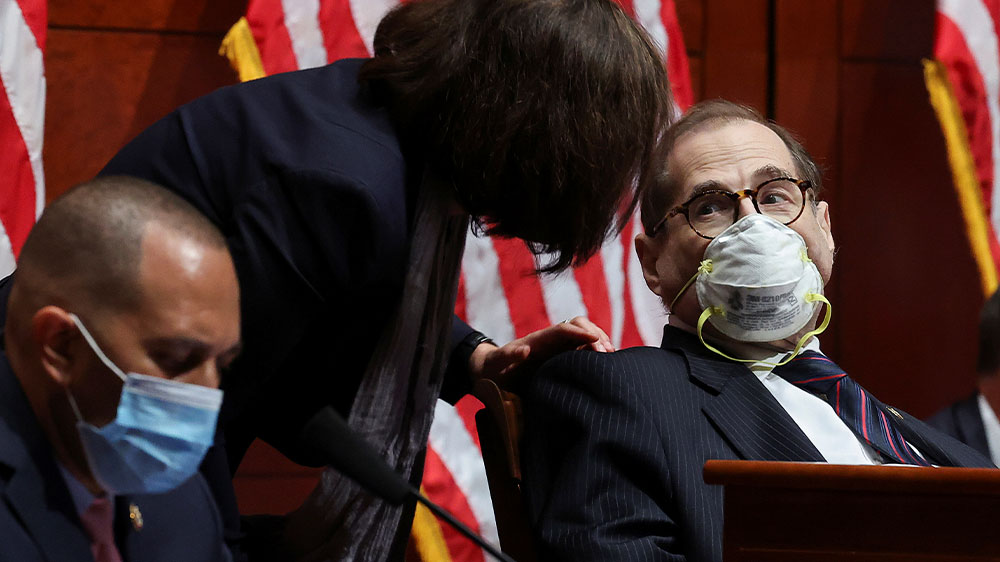 Barr intervened in the sentencing of Trump associate Roger Stone, who was convicted of lying to investigators and intimidating a witness.

A longtime friend of Trump, Stone had coordinated the release of hacked Democratic emails with WikiLeaks during the 2016 campaign, according the investigation of Special Counsel Robert Mueller. Trump commuted Stone’s sentence on July 10 so that he would not serve prison time.

Barr intervened in the sentencing of Michael Flynn, a former US military officer who served as a national security adviser to Trump. Flynn pleaded guilty to lying to the FBI in the Mueller investigation about conversations he had with the Russian ambassador to the US. A Barr aide moved to dismiss the charges.

Testifying under penalty of perjury, Barr told the House panel that Trump “has not attempted to interfere in these decisions” although the president’s tweets have signalled Trump’s interests.

“I will never testify against Trump.” This statement was recently made by Roger Stone, essentially stating that he will not be forced by a rogue and out of control prosecutor to make up lies and stories about “President Trump.” Nice to know that some people still have “guts!”

“On the contrary, he has told me from the start, that he expects me to exercise my independent judgement to make whatever call I think is right,” Barr said.

Barr sided in Tuesday’s hearing with repeated Republican assertions that the previous administration of President Barack Obama had improperly spied on members of the Trump campaign and transition team.

A DOJ Inspector General’s report in 2019 rejected allegations that Obama officials had spied on the Trump campaign, but found violations of rules in FBI requests for secret warrants.

“Spying, that one word, that’s why they are after you,” Representative Jim Jordan, a Republican, told Barr at the start of the hearing. 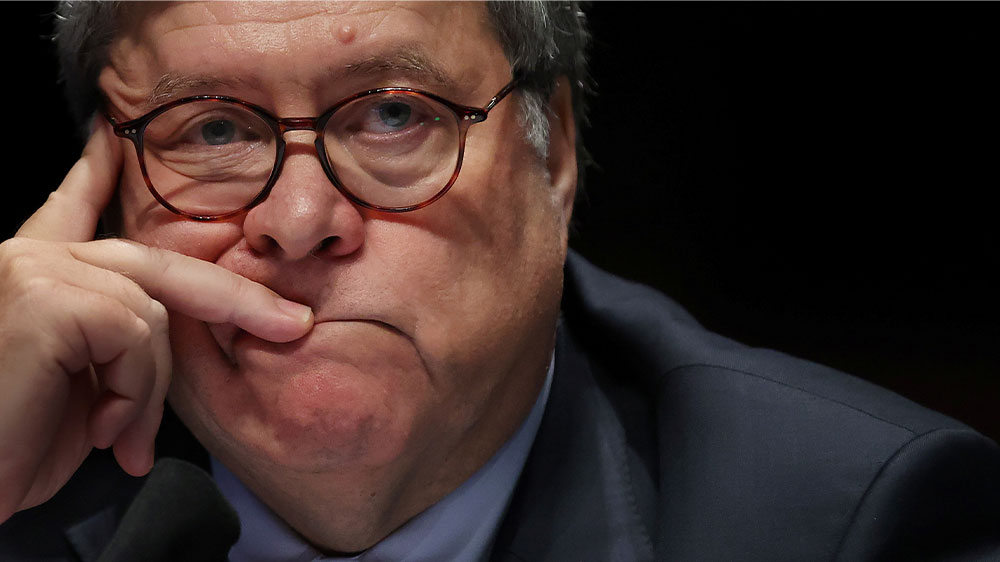 Neither inquiry has yielded any charges to date.