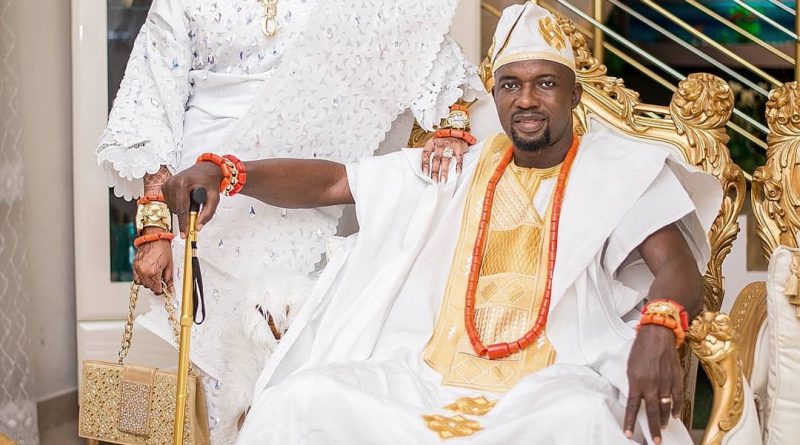 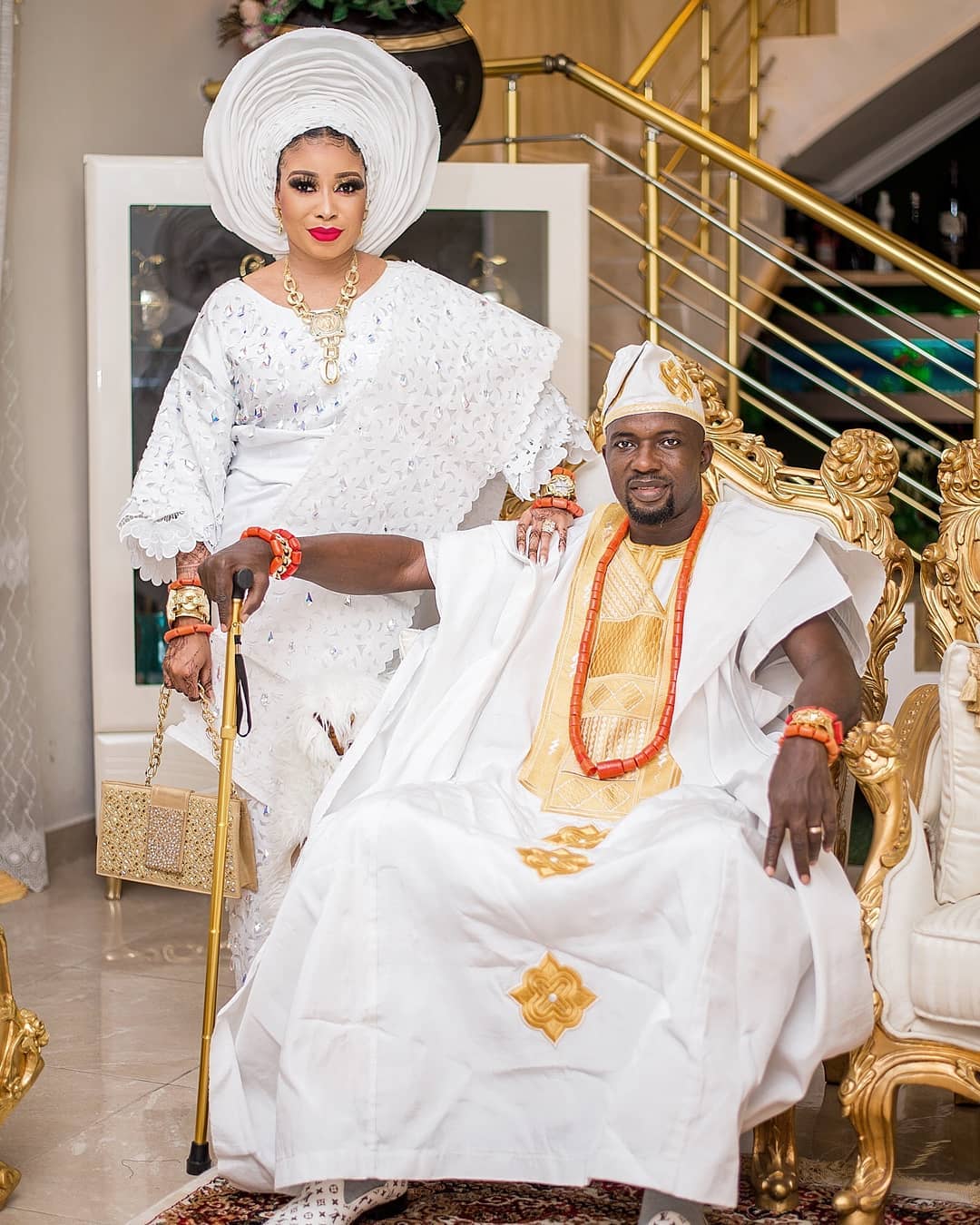 Lizzy Anjorin and her husband

Nollywood actress, Lizzy Anjorin has surprised fans with another revelation concerning her marriage.

Recall that on Thursday July 16, 2020, she married businessman, Abdulateef Adegboyega Lawal at a private wedding in Lagos.

Even more surprising was when news broke out that her husband was married to about five different women with whom he has multiple kids.

In this chat with Kemi Ashefon, Lizzy Anjorin revealed that two of the women who have kids for her husband are actually her friends. She further revealed how her teenage daughter reacted when she got married.

Lovehaven: Congratulations on your wedding? How come you kept your husband from the public for so long?

Lizzy: Thanks so much. I have always been uncomfortable with exposing my personal life on social media. If you observe my page on Instagram, I talk mainly about my businesses—clothing line, jewellery, properties, lands and now skincare.

I am a very private person despite being a celebrity. I shield my life away from the media. My daughter, who is now 23-year-old doesn’t appear on my handles. She is currently studying in the United States and I’m sure not anyone will see her here or abroad and say, “that’s Liz Anjorin’s daughter.’

She has her life to live. So, whoever I dated or now got married to should be spared the hassles of media limelight. Left to my husband and I, we didn’t want our wedding to leak to the media. Despite being close to some journalists like you, I kept it away from all of you (laughs). My husband is a very private person. He has being my friend for over 14 years. Some media guys knew us then but he wasn’t ready to be in the limelight. I respected that and didn’t push him.

But your wedding photos found their way to the social media on Friday?

Yes, I was surprised because we had told everyone present that we didn’t want the social media posts. Someone must have leaked it. Anyways, we are grateful to God. He kept us all these years and we are married today. I believe God compensated my husband for all he did to me and my late mum when I needed help. He never announced it to anyone.

What did he do?

Well, he has been with me for almost 15 years. We don’t quarrel. The relationship has been off and on. I’d leave him today, run after illusion and when I got hurt by other men, I return to him and he always accepted me.

There was a year that my only car was stolen by a man I trusted. I felt ashamed that I would be walking on the street without a car but this man, who is now my husband, gave me his car. In fact, I didn’t know he was hitching rides with ‘okadas’ and fell off one of those. Nobody told me, he didn’t tell me either because he knew I would return the car. As a matter of fact, he has been buying different cars for me ever since then but nobody knew. His friends thought I was interested in his money and never knew I would marry him. We understand each other perfectly and he is a very good man.

Lovehaven: But why didn’t you marry him early? Why wait this long?

Lizzy: I wanted to achieve something in life before I would get married. My mum knew him and would always tell him before she died that he should impregnate me and that would make me agree to marriage. But he allowed me be what I wanted to be. When he asked to marry me a long time ago, I declined. I told that I wanted to be somebody in this industry and prosper very well in Lagos before I would marry. He agreed and told me that the only way I would make him happy is to prosper in whatever I do in Lagos. I went ahead and he supported me all the way. In one day, he bought me a car and got me an apartment. Even when I thought all was over and I would not make it in Lagos and was heading for Ijebu-Ode, where I schooled, he stopped me. He told me, ‘Liz! Eko yi lo ti ma sorire. (It’s in this Lagos that you would make it in life) I am ready to sell my kidney to make you become somebody in life.’

You see, marrying me is not enough to appreciate him. He is my father, my comforter, my gist partner and more. He was a helper for me and my late mum who took him as her son. This man helped me tremendously and never told anyone about what he did for us.

That was the reason when I respected his wish of not letting the media know about him. In fact, since the wedding photos leaked, he humorously said that he slept and woke up a star in one day because his face is everywhere!

Even when we were dating, he didn’t want anyone to know about him. He has a right to mingle freely and not anyone stalking him about because he is dating a celebrity.

Lovehaven: How did your daughter accept him?

Lizzy: My daughter is very happy. She calls him Daddy. He has always been there for all of us. On the wedding day when my daughter called from the US to congratulate us, she reminded me of the day she relocated to Lagos and he gave her some money! Maybe this will shock you—my husband and I didn’t quarrel in 14 years that we knew ourselves. He would tell you that Lizzy is a very humble person.

Lovehaven: But those women whose photos appeared on social media and were called his wives, who are they?

Lizzy: That was a fake story. All those photos they are peddling on social media are false. I am not saying he is not a father of children; he has children of other women. He is a Muslim and entitled to at least four women. So why the noise for crying out loud? These two women who have kids for him are my friends, we talk on the phone. I still spoke with one of my stepchildren before you called me. My daughter is four years older than his first daughter. The two women who are mothers of his kids talk to me like my friends, and bear no grudge. If, after my marriage to him he impregnates another woman, I will accept the baby and bring them home. I married him and not his mistakes. Our mansion is big enough to accommodate 10,000 children. Forget the lies being peddled around that he has four wives. He has just two baby mamas and there is a difference between babymama and wife.

Was that why you asked any woman who claims to be his wife to come with marriage certificate?

Lizzy: Of course! If you claim to be a Mrs. Lawal and you don’t have marriage certificate, then you are fake. We married in the court, we did customary wedding and had a Nikkai. I am his legal wife and I thank God for that. What God has joined together anyone should not put asunder. I have first and foremost been very good friend to my husband for a whole fourteen years, this means that I know all of his activities, whom and who he has dated and been with, which doesn’t define valid and legal marriage under the act. Marrying my friend of over fourteen years means he is a good man and generous man, but the reason he did not marry other women legally is known to him alone. The pictures been displayed on social media by these haters, are people never known to my husband.

You are both into business, is that why you haven’t observed your honeymoon?

Lizzy: Of course, we have goals we are pursuing. He is a businessman who is into legitimate business. Whatever anybody says about his business as selling scrap at Ikorodu is no concern to us. Nobody has arrested him for doing any illegitimate business and he has never defrauded anyone in his lifetime.