More than two decades into the e-commerce era, fashion hasn’t made much headway in the war on packaging waste.

A T-shirt ordered from an online marketplace today arrives by much the same method as it did in 2011 or 2001: wrapped in plastic bags or bubble wrap, packed inside a cardboard box and shipped on delivery trucks to customers’ doorsteps. Mainly, what’s changed is the volume: global parcel volumes topped 100 billion in 2019 for the first time, according to Pitney Bowes, a shipping services company, and surged in 2020 as online shopping took off during the pandemic.

Aside from generating piles of trash, packaging also contributes to greenhouse gas emissions — large boxes mostly full of air take up space in delivery trucks, forcing more trips and frustrating brands’ efforts to meet climate goals. Plastic bags will sit in landfills for millennia, while even cardboard boxes can emit methane as they break down.

The problem even the most sustainably minded brands run into: cardboard boxes are incredibly good at their job. They cost pennies, are easily stored and assembled, and protect even the most delicate goods on the bumpiest delivery truck. Consumers have spent two decades ripping open online orders and immediately stuffing the packaging in the trash. Convincing them to think about boxes, paper and plastic bags at all — let alone go out of their way to recycle — is a struggle.

A growing number of start-ups and brands want to take the cardboard box out of the equation entirely.

The newest is Olive, a shopping technology and logistics company launching Wednesday that will deliver orders from brands like Everlane, Stuart Weitzman and Veronica Beard in shippers – soft but sturdy crates – that customers can return by leaving outside their front door for the postal service to collect. There is a tradeoff: the totes arrive as weekly shipments (twice weekly in New York), allowing Olive to consolidate orders from multiple retailers at its warehouses.

Nate Faust, Olive’s founder and one of the co-founders of Jet.com, the e-commerce site acquired by Walmart in 2016, said consumers will quickly discover other benefits: returns can be sent back with the shippers, for instance.

“There’s been a herd mentality in e-commerce [that] convenience equals speed — that is the sole element of the delivery experience that the vast majority of retailers are focused on,” he said. “Some of these other factors, consumers don’t even realise they could be a possibility because nobody offers them.”

Many of the other efforts to eliminate packaging waste also aim for a clean break with some deeply ingrained aspects of online shopping. Some see logistics as the route to greener e-commerce, while others are trying to wean consumers off single-use packaging.

Asket, a Swedish menswear brand, spent over a year redesigning nearly every aspect of its packaging, from the thickness of its cardboard to the size of its return instruction cards. It swapped out plastic garment bags for a greener alternative even though it would slow down garment handling in factories and warehouses — sacrilege in the age of Amazon and fast fashion.

Others are trying to wean consumers off single-use packaging. Brands working with Repack, a Finnish company, offer customers a choice: receive their items in the usual disposable box, or pay a few dollars extra to swap in a mailer designed to be shipped back for a few dozen more trips through the post. The mailers are made from recycled plastic, as are Olive’s, but their boosters say by using them again and again they save far more packaging from the landfill than they create.

It’s no coincidence that many of these innovations are hitting the market now. Consumers have shown a growing willingness to make small sacrifices for the good of the planet. Businesses from Starbucks to McDonald’s switched to paper straws en masse in 2018 amid mounting pressure to address plastic pollution, and cities around the world have banned plastic shopping bags.

“My dad did not bring reusable bags to the grocery store, it was ridiculous. Now when you go to the local grocery store it’s the anomaly that you didn’t bring your own bags,” said Matt Semmelhack, co-founder of Boox, which developed a reusable shipping box used by brands including Boyish Jeans and Ren Skincare. “That’s the concept, you start doing it in a small way … and suddenly it’s the norm.”

The question is what it will take to reach that tipping point.

Olive, for one, hasn’t actually eliminated cardboard boxes from its shipping process yet. When a customer places an order, the brand first ships the item to the start-up’s warehouses in the same packaging that would have gone to homes, and only then are products put into their totes.

Faust said as volumes rise with individual retailers, hopefully sometime in the next three or four months, it will become cost-effective for Olive to start shipping totes directly to brands, meeting the start-up’s goal of reducing single-use packaging. 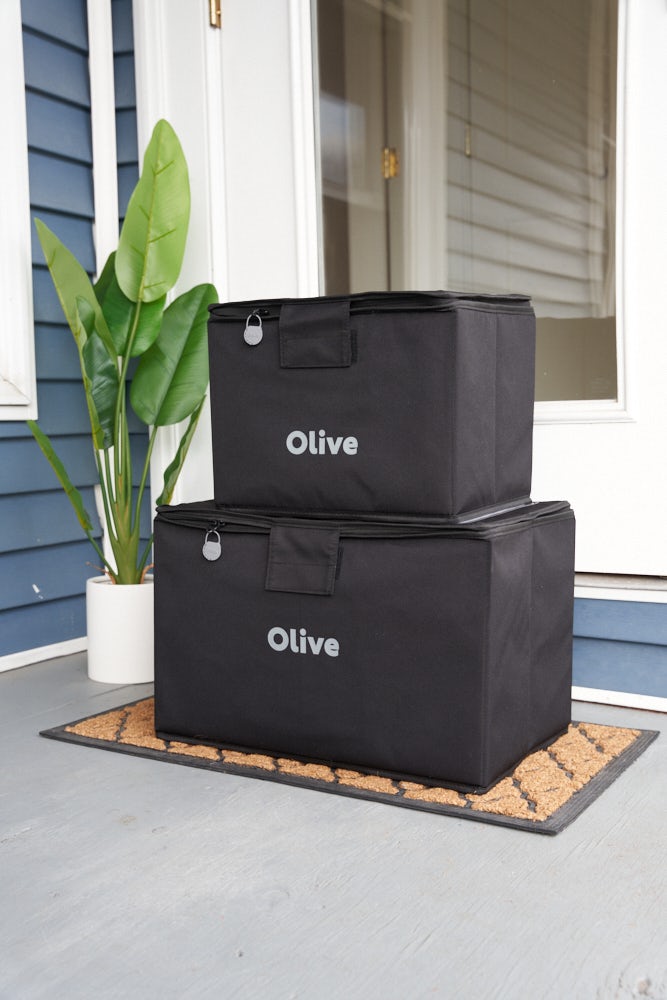 Most sustainability initiatives start out in this sort of limbo, good ideas on paper but requiring too much money or effort on the part of consumers and businesses for all but the most eco-conscious to adopt. The green innovations that go mainstream — solar energy and electric cars to name two — tend to do so once costs drop, and consumers can partake without too much sacrifice.

Sustainable packaging has some elements that are ripe for scale. Much like solar panels and batteries, the cost of recyclable boxes and bags falls sharply as volumes grow. Of course, green power and electric cars also have government subsidies to sweeten the deal for consumers; though cities and some countries have taken steps to ban single-use plastic, e-commerce packaging mostly remains under politicians’ radar.

For now, the market is driving change. It helps that many innovations aimed at reducing waste also make items cheaper to ship. Amazon has repeatedly tightened packaging rules for sellers on its marketplace to consolidate items in fewer, smaller boxes, and has even installed machines in some warehouses that create form-fitting packaging for items as they roll down the conveyor belt. Whether the goal was to reduce shipping costs, save the planet, or both, the end result, according to the company, was to use the equivalent of 1.5 billion fewer boxes since 2015.

Asket estimates that shrinking the size of its boxes and swapping in mailers for the smallest items saves about half a euro per order, which adds up quickly across thousands of purchases.

Polybags, the plastic sheathing used to protect the overwhelming majority of clothing during transit, were trickier. Asket struggled to find a worthy green alternative, eventually settling on bags made from glassine, a type of paper. Even then, the brand had to buy 300,000 bags from their manufacturer — about a year’s supply — and convince factories and warehouses to use them.

Asket is still tinkering with its packaging; shipping labels, with their petroleum-derived glue remain a sticky problem. However, the project is far enough along that the brand published its findings on its website to encourage others in the industry to follow suit.

“Most of what we did is definitely applicable to the average industry player,” said co-founder Jakob Dworsky. “It doesn’t require any unique operational process, it’s pretty standard materials and solutions that are readily available.”

Nudging shoppers toward more sustainable behaviour is an uphill battle: often it means asking them to pay extra to be mildly inconvenienced. The easier the ask, the better the results.

“The best case scenario is a company takes away all the friction for the consumer, and they [the company] pay for it,” said Katherine White, a professor at the University of British Columbia Sauder School of Business specialising in marketing, consumer behaviour and sustainability. “You’re not going to change their mind in the middle of the checkout process. There might be other places to change their mind.”

That’s one reason many sustainable packaging efforts appeal mainly to eco-minded customers. Wealthy shoppers are another potential target. A $3 surcharge goes down easier when paired with a $300 pair of jeans than with a $15 T-shirt. Repack’s first US clients included the premium denim label Re/Done and the jeweller Eliou. In Europe, where the service has been around longer, Repack works with Zalando and other mass-market retailers.

The right presentation also helps. Somewhere between 5 and 10 percent of consumers will tick a box on a brand’s checkout page to use Repack, said co-founder and chief executive Jonne Hellgren. A US-based brand that instead required customers to choose between the reusable mailer or single-use packaging saw the takeup rate shoot to about one-third.

“This is a new way of behaving … it’s never going to be a thing for everyone,” Hellgren said. “Framing is important. Framing in an online environment is even more important.” 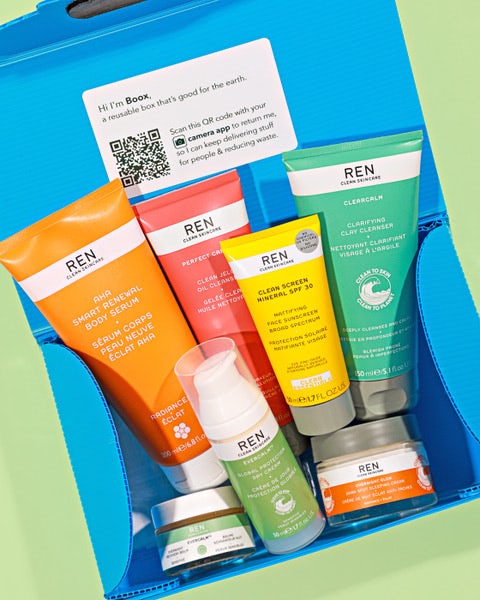 Customers who receive items in a Boox box are encouraged to return it so the packaging can be used again. Ren.

Boox is testing various incentives to convince recipients of its boxes to return them, including discounts on subsequent purchases and donations to local schools or charities. Olive plans to use app notifications and “very persistent reminders” to get its totes back, Faust said.

The most effective approach to convincing consumers to shop sustainably may be for it not to seem like work at all. That may be possible when it comes to swapping plastic straws for paper ones. But finding alternatives to single-use packaging won’t be as straightforward.

“Simple is better,” White said. “Unfortunately some of these things need a more complex solution.”

Editor’s Note: This article was updated on 17 February 2020. A previous version incorrectly described Olive as a marketplace. It is a technology and logistics company.

What Beauty Brands Need to Do to Address Their Packaging Problem

How the Climate Crisis is Reshaping Luxury

What Consumers Really Think About Sustainability