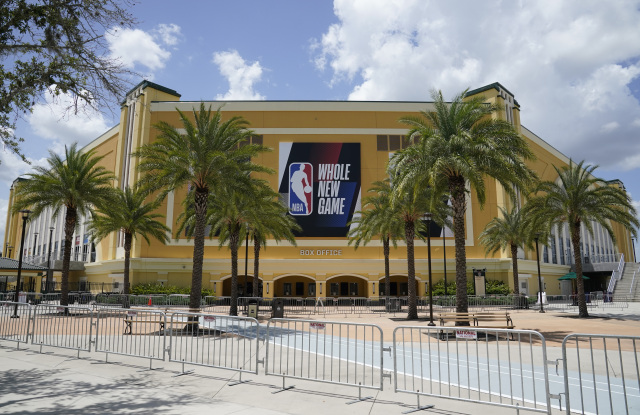 The NBA season resumed Thursday in Orlando, where 22 teams are competing in seeding games and play-in games to qualify for the 16-team NBA Playoffs that will begin on Aug. 17 and the eventual NBA Finals scheduled for Sept. 30.

But what are players, brands, stylists and fashion followers to do now?

Despite the country’s dark mood, and the limitations of quarantine in Orlando, where games are being played at the ESPN Wide World of Sports Complex at Walt Disney World Resort, players are still creating outfit moments, stylists are still requesting clothes, brands are still sending product and social media accounts creating content off of players’ fashion moments are still active. Everyone involved has found their way.

Some brands are celebrating the season’s summer return with new launches. Will Smith’s Bel-Air Athletics dropped a Summer Hoops collection for the season’s return and throwback apparel brand Mitchell & Ness released a Swingman collection of jerseys, shorts and headwear at Lids.

Nike released the third film for its “You Can’t Stop Us” campaign featuring James and reigning NBA MVP Giannis Antetokounmpo, among others, to coincide with the return of the NBA season.

The NBA is allowing players to wear jerseys that replace their names with political statements like “Black Lives Matter,” “I Can’t Breathe,” “Say Her Name” and “Anti-Racist,” among others. Players have made a stand for social justice dating back to the time when former Los Angeles Clippers owner Donald Sterling made disparaging comments about Magic Johnson that resulted in his removal as owner. And Russell Westbrook, Antetokounmpo, Damian Lillard, DeMar DeRozan, Jaylen Brown and Malcolm Brogdon are among those who joined protests this spring.

Political messaging is one thing, but luxury fashion statements, logos and diamonds during the time of COVID-19 are another. While NBA players undoubtedly influence men’s style choices and purchases with everything from their on-court sneaker debuts to their luxury watch choices, with most of the U.S. still on lockdown, and retail facing tough headwinds, is there still a point to creating bubble style moments?

“There aren’t any red carpets and we still get the visibility so why not come to us?” said stylist and creative director Kesha McLeod.

McLeod, who works with Houston Rockets James Harden and P.J. Tucker, believes the players are still a marketing driver for fashion brands. Sneaker and fashion resale app Goat thinks so, too; the platform extended its partnership with the Brooklyn Nets to the bubble in Orlando.

“Our existing partnerships with Goat athletes Kyle Kuzma and Rui Hachimura will continue throughout their time in Orlando with access to off-court and pre-game looks,” said Goat chief brand officer Sen Sugano. “Working with our athletes while in quarantine was a really unique experience for all of us. We were forced to come up with innovative ways to create content from home, while allowing our athletes to have a bit of fun expressing themselves in the process.”

It was initially believed that the NBA would be mandating players to wear their uniforms from the hotel to the arena, but the league said players’ appropriate warm weather wardrobe is allowed (and sports jackets will no longer be required for players sitting on the sidelines, inviting more of a Florida casual vibe). Tucker reportedly brought 60 pairs of sneakers to the bubble, but later clarified to the media that it’s more like 103, and shared on Instagram that he had his young kids, Zoe and King, customize a pair he plans to wear during a game.

“In the lockdown period there wasn’t much communication between us and the players,” Patrick said. “[Now] stylists are coming back and looking for ‘fits and potentially it’s different to their mentality in that they’re in Florida and it’s a different type of setup.” He added that stylists have been requesting more basics and sweats, which he believes “works in our favor.”

“Tunnel ‘fits are part of their game warm-up,” said Keiser Clark founder and designer Marc Keiser. He concurred that stylists have been pulling casual wear and “more laid back pieces” as opposed to his signature studded Moto jacket.

“During quarantine athletes were having fun with it, doing their hallway and at home ‘fits and I think we’ll see that too as the NBA has allowed players to wear what they want to wear,” said Keiser. “With everything going on this year, a lot of players aren’t going as loud as much as they normally would so for us a lot of what’s being pulled is casualwear.”

Players have also been doing some personal shopping in Orlando. “We’ve sent some stuff straight to the bubble,” said Patrick. “Some guys got stuff before then. One client wanted to get settled before placing an order. For everyone it’s different and I guess for the players it isn’t a usual scenario so they’re trying to feel their way through as well.”

Things may have slowed for some brands and stylists but not for McLeod, who remained busy during the months off coordinating pulls, doing virtual styling and working on side projects, including advising client Tucker of the Houston Rockets on his new Houston sneaker store, The Better Generation, opening later this year. She also published a book, “Styling & Understanding Your Business.”

“What’s really amazing is everyone is interested and wants to work [in Orlando]. I’ve been getting a lot of requests. Brands are lending a helping hand knowing how much [athletes] mean to the fashion industry,” said McLeod, who has been pulling from Gucci, Valentino and Songs of Mute.

“I don’t personally see why the style would stop, casualwear doesn’t mean you can’t put together a killer ‘fit,” Keiser added, hinting the moment stylist Karla Welch helped execute for Megan Rapinoe and Sue Bird, styled in Black designers for the virtual ESPY Awards in June, as an example of how players could mix political and style statements. “As much as there are bigger things going on, it’s a moment to capture for a lot of these players and that goes for the NBA and the WNBA…I think the players that are speaking out for political and social change, particularly the Black Lives Matter movement, can continue to put words to action by supporting Black designers and stylists in these bubble ‘fits.”