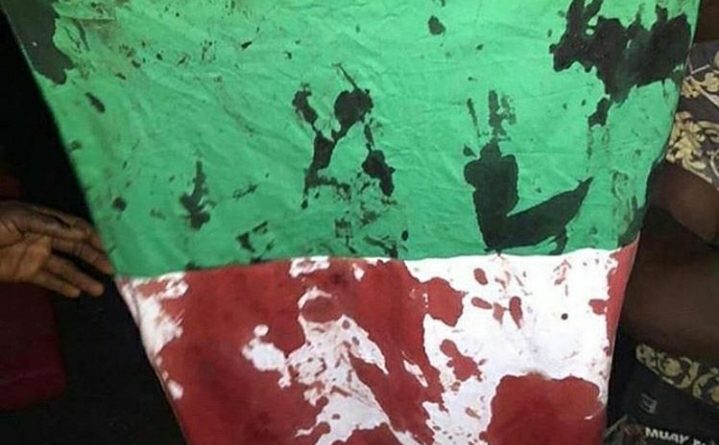 It was already late in the evening when I got a very short notice that I was to be a guest on AriseTV at 10pm, to discuss the #EndSARS uprising from the Northern perspective especially since agitations has begun to tend towards #EndInsecurityNow. I quickly summoned my already dismissed crew and we made our way to the Abuja studio of AriseTV as I tried to recharge my already retired brain along the way, due to a very hectic day.

When it was time for me to be taken, I had already stepped in front of camera and microphone already clipped to my shirt as I eased myself on the chair, waiting for the anchor to initiate, then boom! News of the alleged Lekki Massacre broke. In split seconds, the Programs Manager immediately stood me down and ushered in AriseTV’s Political Editor, Sumner Shagari Sambo to make a commentary on the developing story, I was not certain what was going on until the commentary began to run then I knew my chance to speak to the #EndSARS issue has been blanketed by the horrific tale that landed on my ears like a piece of molten led – Nigerian Soldiers have massacred unarmed Nigerian citizen in an open fire at the Lekki Toll Gate Plaza.

The general mood in the studio suddenly translated into individual inner rage and furry. From my distance I watched as the program anchor grit her teeth and clenched her fist in fury anytime she took a break off-camera, while I struggled to comprehend the “why?” and contend with my own share of the anger at the Nigerian Military’s action, at the same time.

What followed was a deliberately orchestrated barrage of misinformation and fake news, occasioned by outrage and condemnation from local and international quarters.

For the first time, local organizations, the international community, celebrities and the media were sold a dummy in which they fell for, hook line and sinker, qualifying this digital warfare as the mother of all fake news in Nigeria.

Also, American singer, Beyoncé on Instagram said she is “heartbroken to see the senseless brutality taking place in Nigeria,”

As the outrage began to ease and critical minds cared to dig, the reality that we are in the era of alternative facts where provable falsehood can easily be bandied around, dawned on us all.

The Headquarters 81 Division Nigerian Army since released a statement that they were only invited by the Lagos State Government to restore normalcy in the wake of erupting violence and their intervention followed all laid down procedures for Internal Security operations and all the soldiers involved acted within the confines of the Rules of Engagement (ROE) for Internal Security Operations. The official Police report also confirmed that six policemen and about four civilians lost their lives in the #EndSARS protest.

These facts have since been established by credible media platforms like PRNigeria who refused to play to the gallery by daring to report findings of its investigation days after the alleged Lekki Massacre, neither a single bullet-ridden body has been sighted nor any family of victims has reported the death of their relations during the incident. In fact, credible fact-checking sites have debunked footages purported to be from the alleged Lekki Massacre. Leading the pack in debunking fake images from the EndSARS protests is the world’s oldest news agency, Agence France-Presse (AFP) which describes bodies recovered from Lekki Toll Shooting in Nigeria as FALSE (Read here https://cutt.ly/lekkiafp)

Many of the people reported to have been killed in the Lekki Protest have since come out to debunk such reports. For instance, a photo of a young corps member shot in the stomach which went viral on social media claiming that he died as a result of the shoot was debunked by the young man himself who said that the picture was taken on a movie set earlier in the year.

While many such similar cases paraded as victims such as a certain Steve Abbey and Nollywood movie star Eniola Badmus have all come out to deny claims, weighing the available fact versus allegations, the truth of the Lekki matter will not be far from a rationale thinker.

But that is exactly what fake news is meant to serve – confusion. Reportedly invented by Adolf Hitler in 1930, fake news was used against his antagonist to help the rise of fascism that led to the destruction, we talk about today.

Fake news creates a post-truth society where it becomes difficult to determine what is true and what is fake allowing people to stick to what they believe in instead of taking an informed stance simply because it is difficult to interpret reality since people are unable to engage in critical thinking and cannot understand complexities. Such a condition makes it easy for totalitarianism to permeate. That exactly what is happening in our Social Media space today.

This concept can best be understood in Hanna Airez’s book of 1951, “the Origin of Totalitarianism” where she showed how Hitler used fake news as a weapon to amass followers and achieve his aim.

Back to the Lekki Massacre, as citizens, we are glad that the International community has proven time and again that they will always stand on this side of our people anytime the need arises. Particularly, I like the swift reaction in standing for what is right, but apologizing when one is wrong, is also the right thing to do. So, would they now apologize?