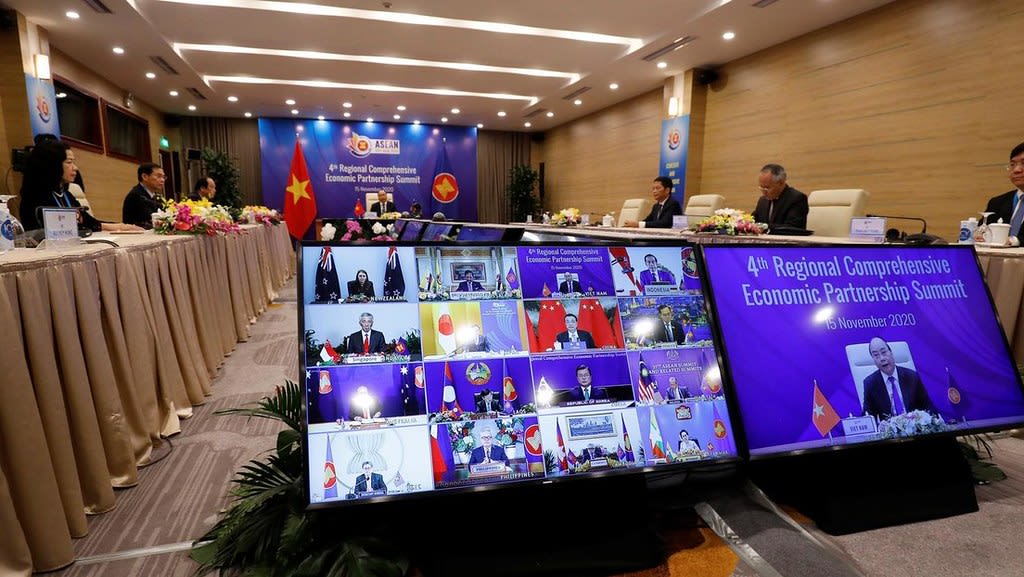 The signing of the much-delayed RCEP trade deal leaves New Zealand and the other members with an agreement that seems shallow on the surface but takes on some strategic significance in the current climate, Sam Sachdeva reports

ANALYSIS: At first glance, the Regional Comprehensive Economic Partnership trade agreement signed by New Zealand and 14 other nations the other week might seem like less than the sum of its parts.

RCEP is a regional partnership, that much is true – but its economic value is not as grand as many on our shores had hoped, particularly after the withdrawal of India, while almost nobody would use “comprehensive” to characterise the fairly modest range of tariff reductions and standards contained within the 510-page document.

Certainly, the deal lacks the labour and environment provisions contained in main ‘rival’, the Comprehensive and Progressive Trans-Pacific Partnership, or CPTPP for short.

But there is more to RCEP than meets the eye – both in terms of the text’s provisions and its broader geostrategic significance at a time when the rivalry between the United States and China shows no sign of receding.

The direct economic benefit of the deal for New Zealand businesses and citizens is certainly not as significant as once anticipated.

Economic modelling commissioned by the Ministry of Foreign Affairs and Trade has projected the deal will increase our GDP by roughly $2 billion in total between now and 2045, when it is expected to reach full implementation; that compares with a projection of an increase of up to $4b by 2040 from the CPTPP.

Former trade negotiator and Saunders Unsworth consultant Charles Finny says while there are some improvements in terms of lower tariffs into Indonesia and improved service commitments from Thailand, the fact New Zealand already has FTAs with the other RCEP members limits the direct economic gains here.

India’s decision to pull out of the agreement, in part due to concerns about a deluge of dairy from Kiwi exporters, has also diluted its value given it was the only country New Zealand lacked a trade agreement with; MFAT’s modelling said our GDP gains would be cut by 40 percent as a result of such a move.

But the alliance of other first-time partners should provide value here, with Finny saying the agreement is the first to link Japan, South Korea and China.

In addition, some of the real significance of the deal comes from the common set of rules it lays out for all 15 economies, particularly in rules of origin – the standards that determine the provenance of a product and the resulting tariffs or duties it should face.

Just 40 percent of many products’ value must be added within the RCEP region to benefit from lower tariffs, while the red tape of certification is reduced across the board.

Finny says that will be most valuable to the economies which rely significantly on manufacturing. Other analysts have also suggested the rules will further strengthen supply chains in the region, and China’s role within those in particular – a suggestion that has caused some hand-wringing in the US.

US ‘on the outside looking in’

In a statement after the signing of RCEP, the US Chamber of Commerce said it did not believe the country should join the agreement but urged leaders “to adopt a more forward-looking, strategic effort to maintain a solid US economic presence in the region”.

“Otherwise, we risk being on the outside looking in as one of the world’s primary engines of growth hums along without us.”

Under outgoing president Donald Trump, the US has also spoken more frequently of “decoupling” its economy from that of China, a proposal that could be made more difficult if Asia-Pacific supply chains strengthen.

But Finny says he doesn’t buy the argument for decoupling, or that the deal could lock New Zealand into reliance on China.

“I see an increasingly interdependent world out there, and anything that is going to simplify the rules for exporters, particularly manufacturers, is going to be a positive thing.”

While RCEP is commonly seen as a China-led agreement, it was in fact the ASEAN nations who spearheaded the talks, he points out.

“But it is great that we have the world’s second-biggest economy and a major trading player such as China, and all the other major economies involved, basically restating a commitment to abide by the rules and operate on a plurilateral basis, at a time when there is a lot of evidence of some other major players not wanting to do anything other than on a bilateral basis and being actually in quite obvious breach of normal trade rules.”

Beijing certainly seems keen to contrast its willingness to sign on with America’s insular approach: the CCP-owned Global Times has been overflowing with analyses and comment pieces in the last week touting the deal, including one that claimed it would “end US hegemony in the West Pacific”.

“I would have thought that the Biden administration will probably be engaging on WTO reform much more constructively than the Trump administration has, and we’ll be looking at a re-engagement with this region as quickly as they can – and part of that mix will be the trade architecture.”

So could the publicity around RCEP push President-elect Joe Biden’s incoming administration back to the table on trade?

Finny believes Biden is likely to want to re-engage with multilateral frameworks, while pressure to do as much is coming from American businesses. The big unknown, however, is how much political headroom he has to do as much, with the composition of the US Senate still up in the air and confirmation processes for key officials to be navigated.

“There’s a lot of things to settle down in the post-Trump era, but I would have thought that the Biden administration will probably be engaging on WTO reform much more constructively than the Trump administration has, and we’ll be looking at a re-engagement with this region as quickly as they can – and part of that mix will be the trade architecture.”

A key test of that engagement could come at the APEC forum next year, which New Zealand is set to (digitally) host, giving the Government a potentially critical role in welcoming the US back into the fold.

But on a more practical note, the ratification of RCEP by enough members for it to enter into force is still some time away; Finny believes there will be good progress towards that goal within 12 months.

While the CPTPP has attracted the interest of non-member economies like the United Kingdom, Taiwan and South Korea, he is not aware of anyone “knocking on the RCEP door”.

However, the agreement has been drafted in such a way to allow India back into the fold should it change its mind and drop its objections – what would be an ideal outcome for New Zealand, even if it seems unlikely for the time being.