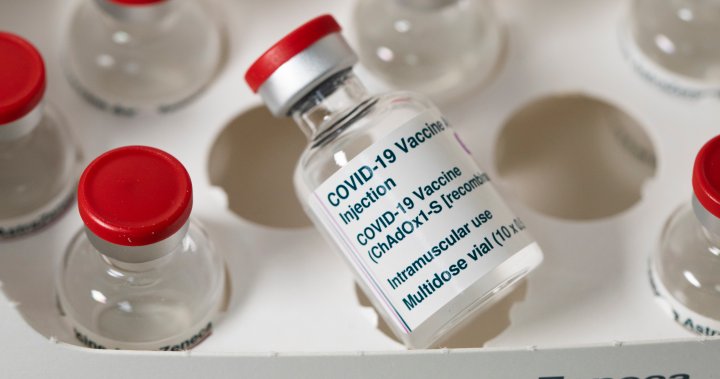 The approval by Health Canada follows that of Pfizer and Moderna, both of which also require two doses.

The AstraZeneca shot is less effective in clinical trials than its rivals’ injections — 62 per cent versus high 90s — but offers distinct benefits.

One major advantage is in logistics. The shot can be stored and transported at normal refrigerated temperatures, unlike its leading mRNA-based competitors, which require ultra-cold storage.

The authorization sets in motion an agreement for up to 20 million vaccine doses to gradually funnel into Canada.

Canada is not expecting to receive the shots until at least the second quarter of this year. The delivery schedule for those doses is expected to be confirmed after the vaccine is approved.

Canada will also receive up to 1.9 million doses of the AstraZeneca vaccine through the global vaccine-sharing initiative known as COVAX by the end of June.

With Pfizer and Moderna, the first doses were administered within days of Health Canada approval.

2:23
Concerns about Oxford-AstraZeneca vaccine for seniors

More recent studies suggest the shot could offer a number of significant benefits. Preliminary findings from Oxford University, co-developer of the vaccine, hint that it may also reduce transmission of the virus and offers strong protection for three months on just a single dose.

So far, makers of all vaccines have said that their shots proved to be highly effective in protecting people from illness caused by the virus, but it was unclear whether the drugs could also suppress transmission of the virus.

It may also be a strong contender in the protection against COVID-19 variants, particularly the B.1.1.7 variant.

The companies have said that its vaccine has similar efficacy against the variant, which first began circulating in the U.K. but has since made a mark on Canada, particularly in Ontario and Alberta.

However, preliminary data suggests the vaccine offers only “minimal protection against mild or moderate disease” from the B.1.351 variant. This variant was first found in South Africa and is now the dominant form of the coronavirus in that country.

The study, which has not yet been peer-reviewed, has drawn skepticism from Canadian experts, who say it’s too premature to come to any conclusions.

AstraZeneca’s vaccine is also mired in some political controversy.

A bitter dispute between the drugmaker and the European Union has stirred threats of export controls that could block shipments to non-EU countries, like Canada.

Recently, the company has become embroiled in supply issues with the EU. It was initially reported the drugmaker would not be able to fulfill its second-quarter supply commitment to the EU due to production issues. However, the company later backtracked and insists the promise will be kept.

Canada is set to get its vaccines from factories in Europe.

Prime Minister Justin Trudeau has maintained that the possible measures from the EU would not hamper Canada’s agreements on deliveries. The threat has so far not impacted deliveries from Canada’s other approved vaccines, such as Moderna.

The AstraZeneca vaccine has already been approved in several countries, including the U.K. and the EU.

This is a breaking news story. More information to come.

— with files from Reuters