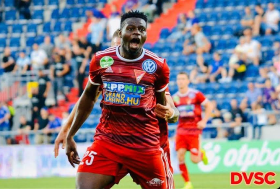 Debrecen’s Nigeria international striker Tunde Adeniji has explained why the much-coveted Lille frontman Victor Oismhen should snub a move to the Premier League in favour of switching to Italian Serie A outfit Napoli.

Adeniji believes the 2015 U17 World Cup winner might be starved of game-time if he joins any of his Premier league suitors.

“I would like him to play for Napoli if he leaves Lille because he will have more playing time, he has all the qualities.

“They don’t have big names in their attack in Napoli and he will play very well in the team.

“Chelsea, Arsenal, Liverpool, Manchester United, Tottenham, Barcelona and Real Madrid he’s being linked with have good strikers who have made a name for themselves, and Osimhen is too young for the pressure now, so I prefer he joins Napoli.”

Adeniji, himself, is having a banner season in Europe, with his brace against Puskás AFC on Saturday taking his tally to 12 goals in all competitions.

And on the back of his goalscoring form, he is hoping he gets recalled to the national team by manager Gernot Rohr.

“God’s time is the best, I have had no contact with any of the coaches yet but I believe my time will come very soon.

“I am concentrating on doing what I know how to do best and put God first,” the Hungarian-based player added.

No thanks to their poor away record, Debrecen are flirting with relegation but Adeniji is confident that they will beat the drop.

“I can say yesterday was one of my best games this season because it has not been easy and the situation we find ourselves is not that good. I am just happy that I gave myself courage.

“We have been unfortunate in the games, hence our poor league position. We still have four more game sto play and we will fight till the end,” he concluded.