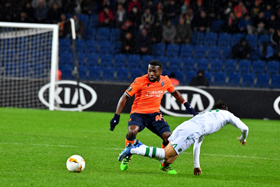 Istanbul Başakşehir’s ex-Nigeria U23 captain Azubuike Okechukwu has acknowledged that the Turkish club who have played only six matches in the Champions League qualifiers since the formation of the club are the underdogs but hopes they can cause an upset.

“Yes, we are the underdogs and amongst the players we hope to spring surprises by fighting together and make it to the last sixteen,”  Okechukwu told allnigeriasoccer.com.

“Rafael Da Silva is here and he’s an added experience to our group, he has told us that facing his first club in Europe and wining is possible.”

Okechukwu could be facing former Nigeria international Odion Ighalo when Istanbul Başakşehir trade tackles with Manchester United and the midfielder had only good things to say about the 2019 AFCON top scorer.

“Personally I have not contacted Ighalo, but I’ll before meeting with his team.

“Ighalo is a goal scorer, he keeps the ball very well up front also. I think this qualities has impressed me the most in his game,” he added.

Okechukwu joined Istanbul Basaksehir on a permanent deal in the summer transfer window but has not figured for the club in the current season.

Explaining why he has not gotten any minutes so far in the new season, he said : “I’ve not been in action because I’ve been injured , I couldn’t finish last season due to injury and I’m working still with the physios to get back”.

Okechukwu has totaled ten appearances in European competitions, comprising eight in the Europa League and two in the Champions League qualifiers.