Simone Biles had an extra special supporter back in the States on Tuesday.

Sharing a photograph of his girlfriend with a huge smile on her face from the competition on his Instagram Story, Owens, 26, wrote alongside the shot:

Owens also reposted a breakdown of Biles’ many accomplishments from Bleacher Report on his Story, as well as another image of his girlfriend proudly taking part in her sport.

“Imma ride with you through whatever baby ❤️ Your strength and courage is unmatched and you inspire me more and more everyday SB 🤞🏽,” Owens wrote on Instagram, along with photos of the couple.

“You always gone be my champ baby and don’t you ever forget that, I love you so much and I can’t wait till you come home and I get to see that beautiful smile again. You know I’m always here for you baby,” he concluded his caption.

Biles and the Houston Texans safety met on a dating app and made their romance Instagram official in August 2020.

The news of Biles taking part in the beam final was announced on Monday by USA Gymnastics. “We are so excited to confirm that you will see two U.S. athletes in the balance beam final tomorrow – Suni Lee AND Simone Biles!! Can’t wait to watch you both,” USAG said in a tweet.

Biles withdrew from all her other individual event finals: all-around, vault, bars and floor.

Officials previously said Biles’ all-around exit was “in order to focus on her mental health.”

Tuesday also marked gymnastics’ final day at the Summer Games. Some have speculated that the Tokyo Games could be the final Olympic competition of Biles’ career. 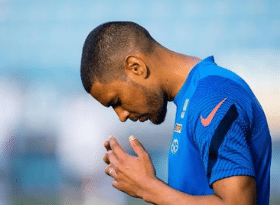 Super Eagles coach Rohr reveals why next week’s friendly vs Cameroon is an interesting game:: All Nigeria Soccer