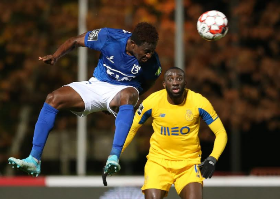 Belenenses SAD defender Chima Akas has set his sights on earning a recall to the Nigeria squad after more than three years in the international wilderness.

Akas has revealed that Super Eagles coach Gernot Rohr acknowledged that he was a good player during his days in the Nigeria Professional Football League but the Franco-German advised him to take his career to Europe to stand a chance of getting into his team.

Although Akas is now plying his trade in one of the top six strongest leagues in Europe, the Portuguese Primeira Liga, Rohr has not looked his way, with the likes of Jamilu Collins and Ola Aina his preferred left-backs.

“It is always nice playing for the national team but Rohr has not invited me to any game since he took over,”http://www.allnigeriasoccer.com/” Akas, who starred for Kalmar in Sweden before switching to Belenenses last summer, told allnigeriasoccer.com.

“Rohr told me I am a good player but I wasn’t playing in Europe. When Keshi and Oliseh were there, I was playing.

“I will keep working hard and hopefully I get noticed. The Portuguese League is more physical, the pace is higher compared to Sweden, it is a better league.”

Akas played the entirety of Belenenses’ 2-1 home win against Portimonense this evening and he was disappointed that they failed to keep a clean-sheet after conceding with six minutes remaining.

“The game was a little bit tough, we did what we had to do in the first half, we dominated them.

“Our target this season is to finish 8th to 10th, then next season we can do better. This is the third coach we are having this season,”http://www.allnigeriasoccer.com/” he concluded.

Akas, 25, was the captain of the home based Super Eagles squad to the 2016 African Nations Championship and turned out for Shooting Stars, Sharks and Enyimba before moving to Europe.