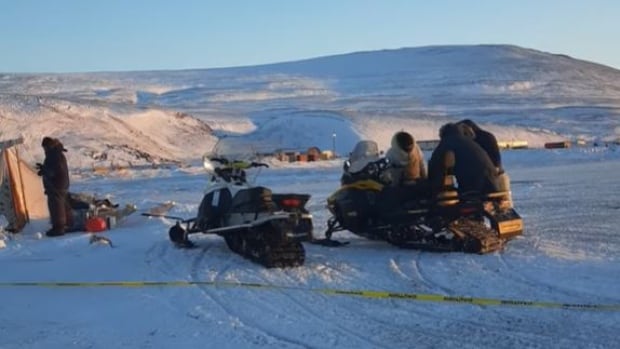 Protesters at the Mary River mine in Nunavut say they are relocating to a nearby cabin, freeing up the airstrip and trucking road that has been under a blockade since last week.

“This departure will not end their advocacy in relation to the Baffinland mine,” a spokesperson for the protesters, Mary Naqitarvik, said in a news release Wednesday evening.

“The guardians are committed to continuing action on the land unless they can see progress in proposed meetings. They are personally committed to protecting and preserving Inuit rights and relationships.”

The blockade is in protest of an expansion at the Mary River Mine, operated by Baffinland Iron Mines Corporation about 176 kilometres from Pond Inlet, and the damage it could do to the environment. The protest started last week during environmental hearings for the mine. Protesters are calling on their regional Inuit organization to represent them better in negotiations with the mine, or to let their communities represent themselves.

The change on Thursday follows a promise from Inuit leadership through Nunavut Tunngavik Incorporated and the Qikiqtani Inuit Association to meet face-to-face with the protesters. The offer was accepted and details are being sorted out, Naqitarvik’s statement said.

RCMP negotiators have arrived in Pond Inlet, she said.

The group of 12, who call themselves the Nuluujaat Land Guardians, has said it will decamp from the airstrip and tote road and move to a nearby hunting cabin owned by the Mittimatalik Hunters and Trappers Association.

Protesters say they will stay there until at least Friday, before travelling to Pond Inlet on Saturday for meetings.

“They are grateful for the support and messages they have received and look forward to returning to their families,” the statement said.

“Inuit do not seek confrontation and only take action when there is no other option to have their voices heard.”

Last Thursday, about a dozen protesters shut down the mine’s trucking road and airstrip, leaving hundreds of mine staff stranded.

On Wednesday, Nunavut Justice Susan Cooper made a court order to allow workers to leave the mine site. Baffinland said 700 people were stranded and supplies could not get in.

The protesters said a court order was unnecessary, as they were committed to work with Baffinland to safely fly employees out. They offered to arrange one flight out each week while the blockade continued, and allow any medical flights to depart.

In a letter to protesters filed with the Nunavut Court of Justice, Baffinland told the protesters on Feb. 7 that their blockade is against federal and territorial law, and the Nunavut Agreement.

“You are causing significant harm,” by blocking a food supply and keeping people from returning to their families, the mine said.

The environmental hearings for the mine expansion ended unfinished on Feb. 6. Each of the five communities near the mine —  Pond Inlet, Arctic Bay, Clyde River, Igloolik and Sanirajak — took part. Protesters began the blockade on the evening of Feb. 4.

That day, Baffinland received a note from hunters who were in the area already, saying they would blockade the airstrip and the tote road.

Stevens said there were fires made on the runway, for warmth, that could lead to damage. The gravel airstrip needs to be graded regularly.

“If the airstrip is not maintained, it is unsafe,” he said.

A crew change scheduled fro Feb. 9 was cancelled. The mine says it needs the airstrip for medical flights and food.

“The airstrip is a lifeline for the project. Without the airstrip, the project cannot operate safely at all,” Stevens said.

A court hearing remains scheduled at the Nunavut Court of Justice in Iqaluit for Saturday morning.

The mine says it trucks around 20,000 tonnes of iron ore along the 100-kilometre tote road each day.

The blockade represents a market loss of around $100 per lost tonne shipped, Baffinland president Brian Penney said in another affidavit, adding it’s unlikely to be able to make up that work for the coming shipping season.

Penney said he spoke on the phone with one of the protesters, Namen Inuarak.

“I said to him that the issues that he was raising were issues which should be resolved between the protesters and the Inuit organizations,” Penney said in his affidavit.

Baffinland said it delivered its court documents to the blockade. The mine told the protesters it would continue to provide them with food and gas if they moved off the airstrip and tote road, the court documents state.

The mine has filed in court a land lease and a negotiated Inuit impact Benefit Agreement between Baffinland and the Qikiqtani Inuit Association, as well as a project certificate issued in 2021 for the existing mine operations by the Nunavut Impact Review Board.