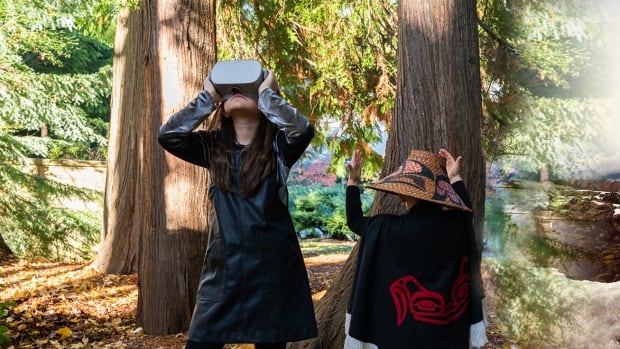 A new project will use virtual reality technology to help engage youth learning about Nisga’a culture and language.

The project called Raising Nisga’a Language, Sovereignty, and Land-based Education Through Traditional Carving Knowledge is a multi-year, three-part undertaking that involves the development of language learning through virtual reality, the carving of new house totem poles, and repatriation of an original house totem pole from a museum in Edinburgh, Scotland.

Amy Parent, a Nisga’a researcher and assistant professor in the Department of Educational Studies in the Faculty of Education at the University of British Columbia. The project is a collaboration between Parent, traditional knowledge holders and hereditary chiefs of the Nisga’a Nation and is funded by the Social Sciences Humanities Research Council’s New Frontiers in Research Fund.

“I think the language revitalization component is really important for us to continue trying to spark the interest and the commitment of our future generations of youth to learn their language and to engage in that,” said Parent.

“I see VR as one tool that can hopefully spark their imagination and their drive to either continue their language or begin learning that one or the other.”

Parent said that no one in the Nisga’a Nation has yet used virtual reality to facilitate traditional language learning. That portion of the project will feature interviews with Nisga’a speakers and land-based walking tours.

Wal-aks, a knowledge holder fluent in the Nisga’a language who is advising on the language portion of the project, said using virtual reality would enhance the learning experience.

“I think that using those instruments would really contribute to being able to learn a lot more about our culture and our language when we’re able to see it,” Wal-aks said.

Nisga’a Elder Jerry Adams, who is one of the key advisors of the project, said the virtual reality component is important for urban Nisga’a youth because they wouldn’t have to leave where they live to visit the Nass Valley.

“I never thought that this would happen at all, because in our day, the thing was that our language was dying and it’ll be gone in 20 years, 30 years, 40 years,” said Adams.

In his own journey to learn the language, Adams said he’s also been learning more about his own identity.

“In my day when I was a young person, we were afraid to speak our language,” he said.

“If we had an Indian accent, people laughed at us. We were not encouraged to learn the language.”

But now seeing the language and culture coming back through initiatives like this one he said is encouraging.

“It makes my heart just feel really good that it is coming back and we’re not losing who we are as Nisga’a.”

Sim’oogit (Chief) Duuḵ, from Lax̱g̱altsʼap, B.C., is a key advisor on the project regarding the cultural and historical significance of totem poles. He said that each family has a totem pole of their own and they are the only ones that can tell the story on it.

“And what they have on there are stories of significance to their own families,” he said.

The project will work on repatriating the Niis Joohl Pole, which was taken from the Nisga’a Nation in 1929 by ethnographer Marius Barbeau and sold to the National Museum of Scotland in Edinburgh.

He said that in the last 150 years, only two new poles have been raised in the community after hundreds were stolen.

Successfully rebuilding the connection to language and culture, he said, will take an approach that comes from many directions.

Duuḵ attended residential school in Edmonton and became a journeyman tradesman after, spending time away from his community.

While away from the Nisga’a Nation, Duuḵ did not speak the language but once he returned home to become involved in community leadership, he regained his fluency by relearning Nisga’a culture and protocols.

“We’re really excited about this project because we feel that it is a real good strategy to utilize modern technology as much as possible,” said Duuḵ.

“All of these different approaches that are happening now will come together to achieve the same goal that we all had in mind.”

The project, which should be rolling out in three phases, has been delayed by the COVID-19 pandemic.

Parent said the first phase is to start carving a new house totem pole in June 2021. She said that, depending on public health restrictions, she would also like to begin filming the virtual reality piece, then start the work on repatriating the pole from the Edinburgh museum.