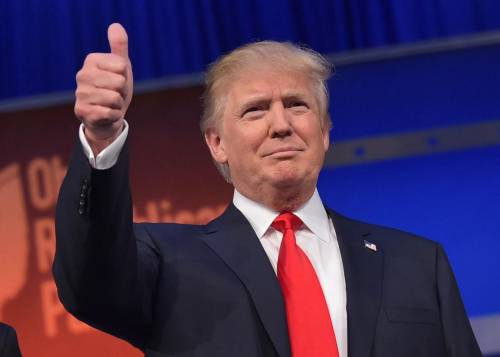 President Donald Trump staged a reckless departure from Walter Reed National Military Medical Center on Monday, telling his followers the virus that dangerously deprived him of oxygen and hospitalised him for 72 hours was nothing to fear before posing for a mask-less photo-op on the White House balcony, CNN reports.

It was a remarkable attempt to convert his still-ongoing disease into a show of strength, even as it underscored his longstanding practice of denying the pandemic’s severity and downplaying its risks despite the more than 200,000 Americans dead.

“Don’t be afraid of COVID. Don’t let it dominate your life,” Trump wrote several hours before walking carefully out of the hospital’s gold front doors, even as his doctors warned he wasn’t yet “out of the woods.”

Wearing a white cloth mask and a navy blue suit, Trump gave several thumbs up and a fist bump as he walked down the hospital’s front steps toward his waiting helicopter. He would not answer when asked how many of his staffers had tested positive.

After a flight over Washington, Trump landed on the South Lawn and proceeded in an unusual route up a set of stairs to the first-floor balcony, where aides had positioned a row of American flags.

Peeling off his mask, Trump posed in salute as his helicopter departed before walking inside. The building he’s returning to has become a centre for viral contagion — in part because of disregard for mitigation measures.

Then Trump posted a propaganda video after apparently re-doing his White House entrance for effect. He also nonsensically seemed to claim he faced the coronavirus because he “had to” as a “leader” — a deeply misleading message to deliver.

“We’re going back. We’re going back to work. We’re gonna be out front. As your leader, I had to do that. I knew there’s a danger to it, but I had to do it,” Trump says in the video. “I stood out front. I led. Nobody that’s a leader would do what I did. I know there’s a risk there’s a danger. That’s OK. And now I’m better, and maybe I’m immune? I don’t know. But don’t let it dominate your lives. Get out there; be careful.”

The message was jarring not only because it was irresponsible but that it came from a current coronavirus patient who has experienced serious symptoms of the disease and whose recovery has included experimental treatments unavailable to most Americans.

As more of his aides test positive for the disease and questions emerge about what steps have been taken to curtail the spread, Trump’s physician Dr Sean Conley offered few details on how staff members would be kept safe upon Trump’s return to the White House, which is equipped with its medical suite.

He also continued to obfuscate on critical pieces of information, such as when Trump last tested negative for coronavirus or what was revealed in a lung scan.

He said privacy rules prevented him from disclosing those details, even though he and other doctors treating the President offered very specific figures in other areas that seemed to show Trump’s condition improving.

“He’s met or exceeded all hospital discharge criteria,” he told reporters outside Walter Reed. “We plan to get him home.”

Even as Trump told aides he feels better and was agitating to get out of the hospital, some aides encouraged him to stay, warning him of the bad optics if his condition were to worsen and require a second hospitalisation.

Trump insisted on returning, however, and on Monday announced on Twitter.

“I will be leaving the great Walter Reed Medical Center today at 6:30 P.M. Feeling good!” Trump tweeted on Monday afternoon.

“We have developed, under the Trump Administration, some great drugs & knowledge,” he went on. “I feel better than I did 20 years ago!”

His message downplaying the severity of the virus will do little to dispel the notion his nonchalance toward mitigation measures is what landed Trump in the hospital in the first place.

And his mention of therapeutics meant to combat the virus will have little application for regular Americans facing a positive diagnosis; medical experts have suggested the combination of experimental treatments and therapies Trump received would be mostly out of reach for anyone except the President.

Speaking Monday, Conley said it had been 72 hours since Trump’s last fever and that his oxygen levels were normal.

“He may not be entirely out of the woods yet,” Conley acknowledged, but said his current condition supported a “safe return home.”

Bored and eager to appear healthy, Trump had agitated for a quick release and on Sunday made a foray outside the hospital walls for a slow-motion drive-by to greet supporters gathered at a roadside nearby.

People who have spoken to the President over the past day say he sounds in good spirits even as he pushed to be released. Trump was demanding to go back to the White House on Sunday, two sources familiar with the situation told CNN but was convinced to remain by his medical team.

“He is done with the hospital,” one of the sources said of Trump’s mood on Sunday. Trump is concerned the sight of him being hospitalised “makes him look weak,” the other source said.

Not all of his allies are in agreement; the President is being warned if he rushes to leave the hospital and then has a setback requiring readmittance it would be damaging not only to his health but politically as well.