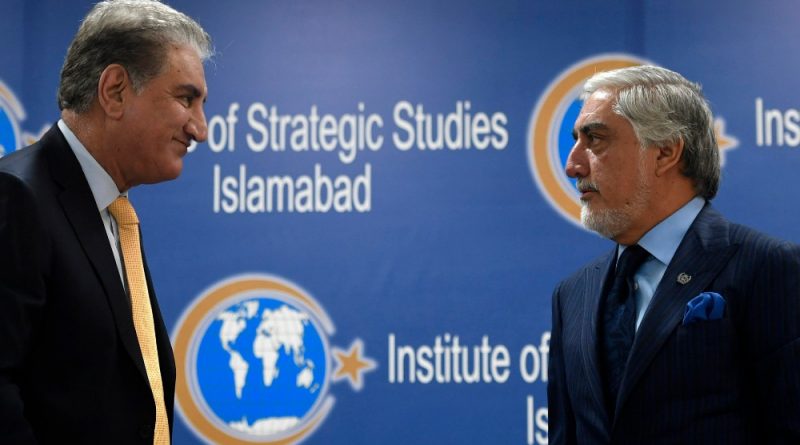 Islamabad, Pakistan – Pakistan and Afghanistan have reaffirmed their commitment to closer ties and the Afghan peace process, as the chairman of Afghanistan’s High Council for National Reconciliation, Abdullah Abdullah, continues his tour of his country’s eastern neighbour.

Speaking at an event in the capital, Islamabad, on Tuesday, Abdullah struck a markedly conciliatory tone, emphasising his country’s appreciation of Pakistan’s help in the peace process and the need for a new era of bilateral relations, which have often gone through periods of deep mistrust.

“After many troubling years, we now need to go beyond the usual stale rhetoric and shadowy conspiracy theories that have held us back,” said Abdullah.

“We cannot afford to pursue business as usual. We need fresh approaches and our people demand it of us.”

Afghanistan and Pakistan have routinely accused each other of allowing safe havens for armed groups that target each other’s territory, mainly the Afghan Taliban and the Tehreek-e-Taliban Pakistan (TTP).

Cross-border attacks continue to occur on both sides, often targeting Pakistani security posts on the border which Pakistan treats as an international boundary but which Afghanistan has disputed.

Abdullah, who served until March as Chief Executive in the National Unity Government led by President Ashraf Ghani, has often accused Pakistan of supporting the Taliban and its allies.

On Tuesday, however, those accusations were not repeated or addressed, with Abdullah choosing instead to commit his country towards not allowing its territory to be used against any other countries.

“We do not want a terrorist footprint in our country or to allow any entity to pose a threat to any other nation,” he said.

“[We need to have] recognition of the mistakes of the past,” said Qureshi. “Unless we recognise that, how do we move forward? Let’s not shy away from reality. Let’s accept reality and add a new chapter to our bilateral relations and build a common future for ourselves.”

Pakistan has been a key player in setting up direct negotiations, first between the United States and the Taliban – which has been fighting Afghan forces since it was toppled in a US-led invasion in 2001 – and again in facilitating the ongoing intra-Afghan dialogue process in the Qatari capital.

On Tuesday, Abdullah said that process was continuing to move forward, after facing several hurdles at the outset.

“A new future, a peaceful future, is on the horizon,” he said. “As we are speaking here, delegations from both sides in Doha, they are sitting around a table, discussing the ways and means of ending decades of conflict through a political settlement in Afghanistan.”

“We have no favourites,” he said. “My message is that we do not want to meddle in your internal affairs. My message is we respect and want to respect your sovereignty, your independence and your territorial integrity.”

In an op-ed published in Saturday’s Washington Post, Pakistani Prime Minister Imran Khan had reiterated the need for the Afghan peace process to move forward but added that it would be a slow process.

“All those who have invested in the Afghan peace process should resist the temptation for setting unrealistic timelines,” he said. “A hasty international withdrawal from Afghanistan would be unwise.”

In Islamabad, Abdullah and Qureshi met for delegation-level talks on Monday, with both sides affirming their commitment to strengthening bilateral ties.

“We want to be friends, not masters,” said Qureshi on Tuesday. And that’s the paradigm shift, and that’s the new realisation and recognition that if we have to coexist in peace and build a common future.”

Abdullah will continue his visit to Pakistan on Wednesday, meeting Prime Minister Khan, President Arif Alvi and several other senior officials and leaders before departing for Kabul.