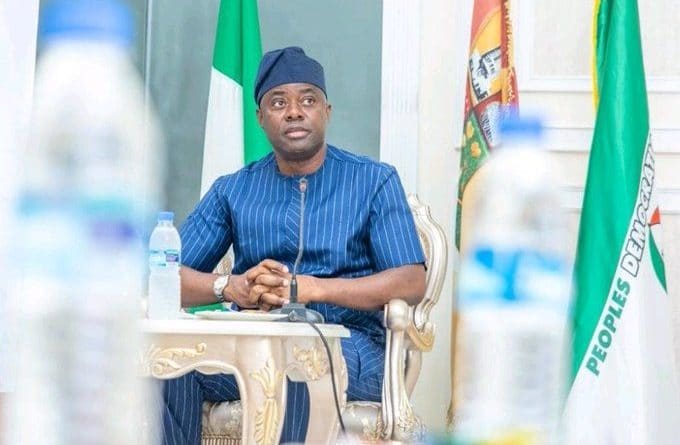 The Governor Seyi Makinde, has said that the state has developed a robust strategic plan to guide the adoption of agriculture as a viable pillar for expanding the state’s economy.

Makinde who stated this on Wednesday, during the flag-off/roll-out of the distribution of agricultural inputs to farmers by the Federal Ministry of Agriculture and Rural Development, stated that the construction of rural roads, upgrade of farm settlements to Farm Estates, flag-off of the youths in agribusiness initiative in Awe as well as the flag-off of the Oyo State Agribusiness Agency (OYSADA) headquarters in Saki were part of efforts to reposition agriculture in the state.

The governor, who was represented by the Secretary to the State Government, Olubamiwo Adeosun, reiterated the state’s belief in putting resources together in a systematic, deliberate and logical way to create an impact on agribusiness in the state and the country.

In his address at the event attended by the Minister of State for Agriculture and Rural Development, Mustapha Baba Shehuri, he commended the Ministry’s support to farmers in Oyo State when the world is facing the challenges of COVID-19, noting that it had become imperative to “come together to support our citizens.”

He added that the distribution of agriculture inputs to the farmers by the Federal Ministry was coming on the heels of his government’s intervention in the sector, through the state’s COVID-19 Food Security Emergency Intervention Programme, which he said has seen the government distribute seedlings and farm inputs to some 11,000 smallholder farmers.

A statement by the Special Assistant (Print Media) to Governor Makinde, Moses Alao, the governor maintained that his administration has resolved to use agriculture as the core sector for transforming the state’s economy, noting, however, that exploring the agricultural sector in building the economy will depend on the ability to reshape and revamp the sector.

He tasked the Federal Ministry of Agriculture on areas of partnership with the state, requesting for consideration for the state on the APPEAL and World Bank CARES projects.

He added that the state will need to understand how it will benefit more from Federal Government Agricultural projects such as the agriculture mechanisation scheme, while also requesting that Federal Government concession the Ikere Gorge Dam to the state so that it can maximally utilise it for the development of agribusiness.

The governor further requested the Federal Government to consider the reconstruction of several federal roads that link agriculture communities with markets and urban centres in the state, saying: “We anticipate that our collective efforts will provoke game-changing ideas and action plans that would set the pace for agricultural transformation in Nigeria and Africa at large.

“We have, within the last one year, developed a robust strategic plan that is guiding the agricultural implementation in the State.

According to him, we have started the following: construction of several rural roads, these include the Iseyin-Moniya road that leads to the food basket region of Oyo State, the development of the Awotan-Akufo road, which links one of the planned Farm Estates to the railway line from Lagos and Ibadan.

“We are in the process of upgrading several moribund farm settlements starting with Eruwa and Akufo to become world-class integrated Farm Estates driven by the private sector.

“We are finalizing the construction of a major silo in Awe, Oyo town, developing rural aggregation centres across diverse regions and several international agribusiness investment drives that are currently yielding the level of private sector investors committing to the state.

“Just last week, we flagged off the headquarters of the new Oyo State Agribusiness Development Agency in Saki, Oke Ogun, which will be responsible for developing and managing agribusiness in the state.

“As earlier mentioned, we believe that putting resources together in a systematic, deliberate and logical way will create an impact on agribusiness in this State and Nigeria.”

Earlier, the Minister of State for Agriculture, Shehuri, said the challenges posed by the COVID-19 pandemic made it critical that countries around the world should ensure that their food supply chains are not disrupted, noting that the distribution of agriculture inputs was aimed at working “hand-in-hand with state governments and other relevant stakeholders to assist in ensuring food security, economic growth and job creation, especially in the face of COVID-19 pandemic.

“It is, therefore, my pleasure to be here with you today to flag-off the distribution of agricultural inputs to smallholder farmers, which include different categories of seeds of Kenaf, yam and cocoa seedlings as part of my Ministry’s interventions to reduce the effect of COVID-19 pandemic on agricultural production in Nigeria and avert food scarcity in 2021,” the minister said.