The revenue accruable to the Federal Government from the sale of crude oil is estimated to drop by a cumulative sum of about N140bn in May and June this year following oil production cuts by the Organisation of Petroleum Exporting Countries and its allies.

OPEC and its allies, a group called OPEC+, decided in April to cut oil output by a record 9.7 million barrels per day to shore up oil prices after they crashed massively following the widespread lockdown measures targeted at halting COVID-19 spread.

Based on the Declaration of Cooperation agreement by OPEC+, Nigeria, a member of the global oil cartel, reduced its daily crude oil production by 216,000 barrels all through the month of May.

Nigeria makes the bulk of its foreign exchange earnings from crude oil sale.

The Minister of State for Petroleum Resources, Timipre Sylvia, who confirmed the reduction that was done in May, further stated that the country would continue to comply with the agreement of OPEC+.

At the 179th Meeting of the OPEC Conference on Saturday, the Secretary General, OPEC, Mohammad Barkindo, explained that the voluntary production adjustments of 9.7 million bpd would be in May and June 2020.

This implies that Nigeria will further cut its production by about 216,000 bpd all through June.

For the 60-day period (May and June), the country would have reduced production by 12.96 million barrels.

Although global oil prices were battered by a severe demand drop in April, Brent, the benchmark against which Nigeria’s crude is priced, traded around $30 per barrel in most trading days last month.

Findings on Saturday, however, showed that the commodity traded at $42.30/barrel as at 14.22pm Central Standard Time.

Taking a conservative average price of $30/barrel and multiplying it with 12.96 million barrels, it implies that the country’s earnings during the two-month period would reduce by $388.80m or N139.97bn (at the official exchange rate of N360 to one dollar).

Based on the above, Nigeria will be losing nothing less than N140bn in May and June as it joins OPEC+ in the Declaration of Cooperation agreement on crude oil production cut.

Sylva recently explained in a tweet via his verified Twitter handle that the production cut deal was to ameliorate the current situation caused by the COVID-19 pandemic.

He also declared that Nigeria’s compliance with the agreement had reached 52 per cent, adding that the country joined its OPEC+ counterparts in April 2020 to bring into effect the agreement to cut 9.7 million barrels of crude daily.

The minister said, “Nigeria has made concerted efforts to adhere to this commitment and will continue to do so unequivocally.

“Based on current NNPC data, Nigeria reduced its current production in May 2020 to 1.613kbd. The difference between its reference production of 1.829kbd with its May 2020 production figures is 216kbd.”

Sylva said the country’s current crude oil production had dipped, which was due to efforts in ensuring adequate compliance with the OPEC+ oil cut agreement.

He said, “It is worthy to note that current daily crude oil production is well below the period’s commitment level of 1.412 million barrels per day and will translate to full compliance by end of June 2020.

“Nigeria will continue to fully comply with the agreement and look forward to improving on its compliance levels for the lifespan of this historic intervention by OPEC+.”

Also, Barkindo explained that the production cuts were agreed on by participating nations following the devastating impact of the COVID-19 pandemic on the oil sector.

In his address at a videoconference, which was made available to our correspondent in Abuja, the OPEC boss said, “Every economic sector was impacted by this fast-moving, but silent invader.

“This has been clearly evident in global oil. Every producer has been impacted; no one has immunity.”

He added, “To put the scale of the transformation in some context, we only need to look at the change in expected economic and oil demand growth. Expected 2020 global GDP growth has fallen dramatically from a positive 2.8 per cent at our March 5 meeting to a negative 3.4 per cent today.”

He noted that the expected 2020 global oil demand growth had dropped from a positive 0.5 million bpd at OPEC March meeting to an astounding negative 9.1 million bpd currently.

“These are the largest and longest in the history of OPEC, OPEC+ and the oil industry, with the focus on rebalancing and stabilising the market, in the interests of both producers and consumers.”

He observed that the decision taken in April was a clear demonstration of the commitment, motivation and dedication of OPEC and its partners in the DoC, led by the Russian Federation.

Barkindo said this was in terms of looking to aid the short-term and providing a platform for recovery and growth in the coming months and years.

He urged members of the cartel not to be deterred, and expressed hopes that the worst was over for the oil sector.

Earn Money Online As You Sleep 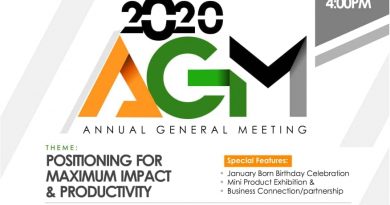