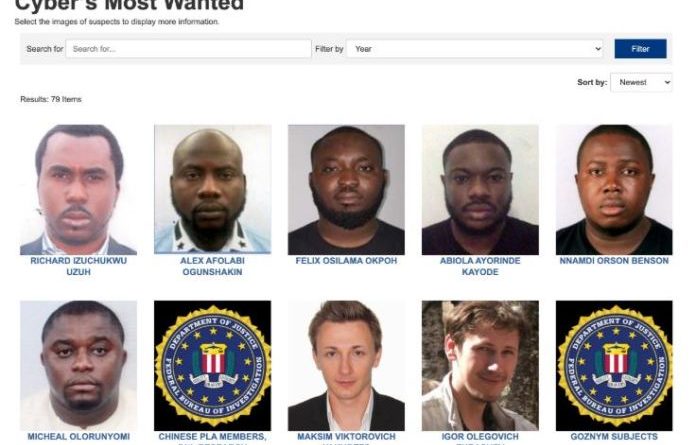 Crime
June 27, 2020June 30, 2020 Mary 0 Comments
LinkedInFacebookTweetPin
LiveChat will greatly increase the number of your satisfied customers. I've already tried it and I can recommend it as a go-to customer service tool! Sign up today for a free trial!

Nigerians have taken to the micro-blogging site, Twitter, to berate the Federal Bureau of Investigation (FBI) over what they described as “racism” on the appearance of 6 Nigerians on the FBI’s Cyber Most Wanted list.

Naija News had reported earlier that the FBI listed six Nigerians among most-wanted cybercriminals in a tweet on Saturday morning, June 27, where it demanded tips on how to catch these six Nigerians.

The FBI said in its statement that Ogunshakin, Uzuh, Okpoh, Kayode and Benson are all wanted on charges of conspiracy to commit wire fraud.

“Alex Afolabi Ogunshakin is wanted for his alleged involvement in a Business Email Compromise (BEC) scheme that defrauded over 70 different businesses in the United States resulting in combined losses of over $6,000,000 USD.

“Ogunshakin allegedly later conducted his own BEC schemes, learning from Uzuh and others.

“On August 21, 2019, Ogunshakin was indicted in the United States District Court, District of Nebraska, Omaha, Nebraska, on charges of Conspiracy to Commit Wire Fraud.

“Micheal Olorunyomi is wanted for his alleged involvement in a Business Email Compromise (BEC) scheme that defrauded over 70 different businesses in the United States resulting in combined losses of over $6,000,000 USD.

“Olorunyomi allegedly defrauded several victims out of more than $1,000,000 USD.

“Additionally, the bank accounts of many of Olorunyomi’s alleged romance scam victims were provided to other co-conspirators to be used to receive fraudulent wire transfers from other fraud schemes.

“On November 13, 2019, Olorunyomi was indicted in the United States District Court, District of Nebraska, Omaha, Nebraska, on charges of conspiracy to commit wire fraud, Identity Theft, and Access Device Fraud. On November 14, 2019, a federal warrant was issued for his arrest.”

Naija News captured some of the reactions below…

I checked this list, there are 39 men of Arab origin, 16 Russians, 20 Chinese/Southeast Asian guys, and just 6 Nigerians.

But guess who FBI chose as the poster boys for this crime? The 6 Nigerians.

Why is Nigeria the subject of this tweet? You have over 70 people on the wanted list with just 6 Nigerians why is the concentration on the 6 Nigerians? This is a very bias tweet, @FBI. https://t.co/Lixa2J7T3b

This sensationalizing bullshit is the reason I commended Dubai Police. They captured scammers of Nigerian descent and paraded them as “international cyber criminals.” FBI had to activate Nigerian nationality-baiting, with only 6 Nigerians out of 79 scammers of many nationalities. https://t.co/afHg8G0nvH

Now is the perfect time to change the Nigerian Narrative.

If you are Nigerian and your hustle is legit, retweet this tweet and comment your profession/business using the hashtag #NigerianandLegit.

We won’t allow FBI or anyone tell the world our story using 6 Nigerians!! https://t.co/9f4TJaSoiH

Clicking the link and reading it all, I found out there are 79 of them. 16 Russians, 20 Chinese ,6 Nigerians and 37 men of arabic descent, but you decided to highlight Nigerians to get attention when it even had the least nationals amongst the rest. #BlackLivesMatter https://t.co/hGtpQWdQwe

Racism at its peak.

But racist FBI has chosen the only 6 Nigerians as the poster boys for this crime.

Criminals are in every nation of the world but the moment you are black…..

This issue of 6 Nigerians FBI used as poster for their wanted list just another example of how we have been helping them dent our own country image… They know we will help them scream it loud more than them..

This will continue to happen until we’re tired and “fight” back. pic.twitter.com/s4QUtlXUGu

In the article there are 79 Persons: 16 Russians, 20 Chinese, 6 Nigerians and 37 men of arabic descent but the headline is showing only 6 Nigerians. Smh#BlackLivesMatter https://t.co/MaPlGdQHXE

A cyber crime is committed there are 79 Persons: 16 Russians, 20 Chinese, 6 Nigerians and 37 men of arabic descent.

Our dearest FBI choose to use 6 Nigerians for their headline,by the time we realize the hate it’ll be so far gone.

I will tell you on that list there are 79 Criminals :16 Russians, 20 Chinese ,6 Nigerians and 37 Arabians but the headlines has to be 6 Nigerians,Just to make Nigerians look bad to the rest of the world🤦🏽‍♂️

To everyone hustling Legally in Nigeria May God bless your hustle.