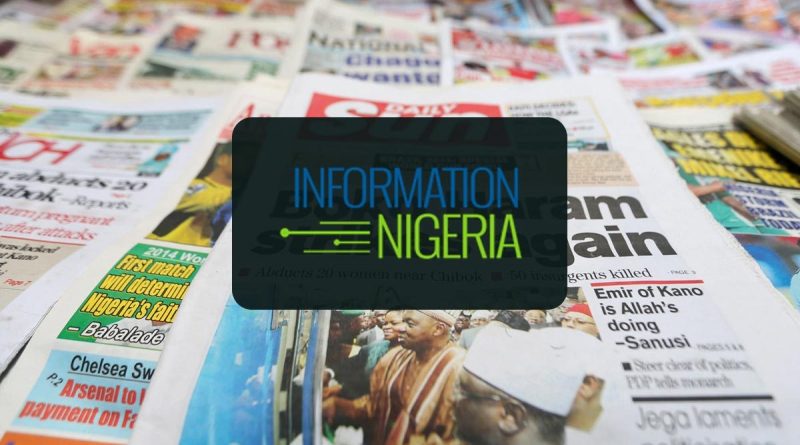 Why Oshiomhole Insulted Me In 2016: Ize-Iyamu

According to Ize-Iyamu, Oshiomhole called him a bad choice in 2016 because he was in a different political party then.

The national chairman of the Peoples Democratic Party(PDP), Prince Uche Secondus on Saturday lamented that Nigeria is without direction.

Secondus further stated that the country needs prayers and God’s intervention. Speaking in Uyo during the commissioning of the 1,000 sitting capacity of PDP State Secretariat, he lauded Akwa Ibom state governor and described him as an example of a truthful, honest and trusted leader.

Why Ajimobi’s Widow Was Angry With Govt — Oyo Deputy Gov

Oyo State Deputy Governor, Mr Rauf Olaniyan, says Mrs Florence Ajimobi, widow of former Governor Abiola Ajimobi, lashed angrily at him during the burial of her husband because she was grieving.

Speaking while receiving the leadership of the South-West Group of Online Publishers on Saturday, he said she has called him afterwards and they have settled the matter.

The National Association of Polytechnic Students (NAPS) have given the federal government 14-day ultimatum to reopen tertiary institution across the country.

The National President of NAPS, Olalere Adetunji and Ilesanmi Moses, Students Union President, Federal Cooperative College, Eleyele, Ibadan, in their joint address, queried why the federal government would reopen markets while schools remain closed. They further called on the FG to speedily release the resumption date for institutions across the country or the student body would organise a mass protest across the country.

The minister made this known when he appeared on a live television programme (Democracy Today) aired on AIT on Saturday. According to Amaechi, out of the $500m loan the federal government took to build the Abuja-Kaduna rail line, $96m has been paid, adding that Nigeria has capability to pay all the China loans.

Insecurity: ‘No One Is Safe’, Shehu Of Borno Laments

Shehu of Borno, Alhaji Abubakar Ibn Umar Garbai El-Kanemi has lamented over the worsening state of insecurity in the state.

El-Kanemi made the cry during a Sallah homage to Governor Babagana Umara Zulum at Government House, Maiduguri on Friday. According to him, Borno State is no longer safe, following attack on the convoy of Governor Zulum in the northern part of the state.

Mai Mala Buni, Yobe state governor who has been appointed as the caretaker Committee of All Progressives Congress, APC, says the purported Tinubu/Dogara ticket for the Presidency in 2023 is not the Party’s priority at the moment.

Speaking during an interview with BBC Hausa Service interview monitored in Kaduna, on Thursday, he said it is impossible to prevent people from talking especially during a democratic dispensation.

Some Appointees Have Abused Trust Reposed On Them: Buhari

President Muhammadu Buhari says there has been an abuse of trust by some appointees from both previous administrations and his government.

Buhari said this while speaking with state house correspondents after observing Eid Mubarak prayers at Aso Rock, on Friday.

Nigeria’s Next President Must Come From The South — Ndume

The senator representing Borno South and chairman, Senate Committee on Army, Ali Ndume says the next presidential candidate of the ruling All Progressive Congress(APC) must come from the South.

Speaking in during an interview with Tribune, he added that such was the zoning arrangement put in place by the ruling party.