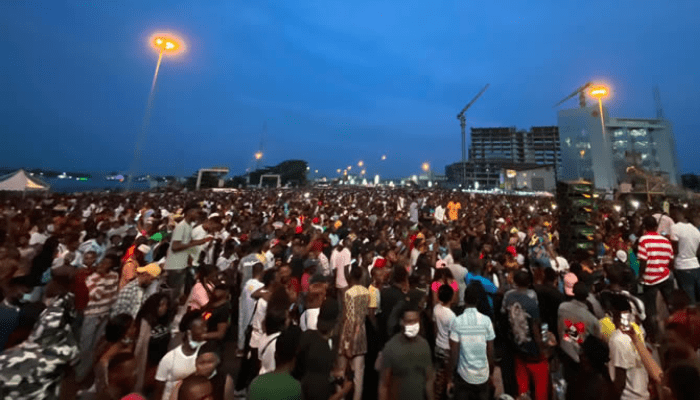 Amnesty international released evidence pertaining to the shooting at the Lekki toll gate
Amnesty international, a non-governmental organisation which is focused on human rights has on Wednesday released investigative evidence concerning the Lekki toll gate shooting.
An on-the-ground investigation by Amnesty International confirmed that the Nigerian army and police killed peaceful protesters as their collation of videos and photograph footage revealed that two army vehicles left the Bonny Camp – a military base approximately a seven-minute drive from the Lekki Toll Gate at 18:29 local time on 20 October.
This was followed by four vehicles with flashing lights in a convoy appearing to be vehicles used by the Nigerian military and the police, all headed towards the Lekki toll gate. The vehicles were tracked to the Toll Gate and at around 18:45 the Nigerian military opened fire on the peaceful protesters.
2020 Anzisha prize goes to 21 year old Egyptian Entrepreneur

Alaa Moatamed, a 21 year old Egyptian entrepreneur has won the 2020 Anzisha prize of US$25,000.
The Anzisha Prize, which is a partnership between African Leadership Academy and Mastercard Foundation, celebrates African entrepreneurs aged 22 years and younger, and has so far supported 122 entrepreneurs.
Moatamed is the co-founder of Presto, a leading delivery management service which provides business owners with an affordable and convenient delivery service for customers.
Passionate Moatamed said “Across Upper Egypt, I saw people suffering from the problem we are solving and I wanted to try my best to help them, especially small businesses owned by women. I want to expand my service across Africa to help women who are suffering from operational hassles.”

Lagos state judicial panel began the hearing of police brutality cases on the 27th of October 2020
The Lagos state judicial panel began the hearing of police brutality cases on Tuesday in relation to the core demand of protesters who successfully demanded the end of a widely feared police branch called the Special Anti-Robbery Squad (SARS).
The panel which is made up of eight people including two youth representatives and is expected to sit for the next six months.
One of the hearings from that day was from a father of five who sought justice for what he said was a 47-day detention in 2012 at the hands of SARS officers that came after his boss accused him of theft.
He said he bled profusely and lost two teeth as officers beat and tortured him, demanding he confess, and later took his car, generator and the deed to his house. By 2016, however, a ruling court awarded him N10 million, but till date, SARS never paid him nor the guilty officers disciplined.
The panel has said that this case would be ruled on in 7-10 days.

The United States has halted the crowning of Ngozi Okonjo Iweala as WTO Director General
The World Trade Organisation has delayed the announcement of Nigeria’s Ngozi Okonjo-Iweala as its new Director General after the United States raised concern about her selection as a consensus candidate after receiving support of about two thirds of voting member nations.
According to reports from Geneva, just before the announcement Wednesday, the United States representative at World Trade Organization took to the floor to insist that South Korea’s candidate remained a contender, and that Washington will not recognise Okonjo-Iweala as the consensus candidate for appointment as Director-General.
In response to the US surprise Wednesday objection, the General Counsel of the WTO has now postponed its announcement of the new Director-General until a further meeting, which is now scheduled for 9 November; after the US presidential elections.

Sanwo-Olu admits Nigerian soldiers were responsible for the Lekki shooting
Almost one week after videos and graphic scenes from eyewitnesses and protesters show that security forces dressed in Nigerian army uniform opened fire on unarmed protesters at the Lekki toll gate in Lagos, the governor of the state, Babajide Sanwo-Olu on Monday admitted to Cable News Network (CNN) that, indeed the military was responsible.
“From the footage that we could see because there were cameras there, it seems to me there were men with a military uniform which should be Nigerian army,” Sanwo-Olu said during an interview with CNN on Monday evening.
When the American news-based pay television asked the governor of Africa’s biggest city to confirm again that it was the military that ordered the shooting of unarmed protesters at the Lekki toll gate last week Tuesday, Sanwo-Olu said: “Yes, they were there and that is what the footage shows.”
He also said that the CCTV footage of the event would be made available during the judicial panel hearings and all everyone involved would be held accountable for their actions.

Karl Toriola has been named MTN Nigeria’s next CEO, effective from March 2021
MTN Nigeria has named Karl Olutokun Toriola as its next Chief Executive Officer (CEO), effective from March 2021. Toriola has now become the second Nigerian to be named as CEO of the Nigerian unit of MTN Group after Mike Ikpoki in 2013.
Toriola has worked with the MTN Group over the last 14 years he is very vast in business analysis, telecommunications, corporate finance, human resource management, risk management, and even engineering.
He bagged his Bachelor’s degree in Electrical Engineering from Obafemi Awolowo university, Nigeria in 1994 and went on to obtain his Master’s degree in Communication Systems from Swansea University, United Kingdom, in 1996.
Toriola’s drive for excellence has pushed him to further acquire more certificates in corporate finance, human resource management, and breakthrough programs for senior executives from London business School, Harvard business School, and IMD business School, respectively.
He is also an Alumnus of the prestigious Wharton business school and the European Institute of business administration (INSEAD) where he obtained certificates in strategic risk management, and finance for executives.

Tanzania’s current president is poised to be declared the election winner
With 60 percent of counted votes, Tanzania’s current president, John Magufuli has 83 percent of the votes and has won 194 of the parliamentary seats, while the opposition won just 2.
The United States has said “irregularities and the overwhelming margins of victory raise serious doubts about the credibility of the results.” Main opposition presidential candidate Tundu Lissu with the CHADEMA party, who has received 14% of the vote so far, has rejected the election and called for protests.
The opposition alleges widespread fraud including double-voting, ballot box-seizing and the rejection of thousands of election observers from polling stations. Few international observers were allowed to watch the vote.
The electoral commission has denied allegations of irregularities in the East African nation irrespective of observers saying that Tanzania’s reputation for democratic ideals is crumbling, with Magufuli accused of severely stifling dissenting voices in his first five-year term.

More than 80 million Americans have voted so far in the 2020 elections
The early vote surge currently going on in America has far surpassed the total early vote in 2016, even as the US election is less than a week from now.
President Trump, the Republican president is being challenged by Democratic Party nominee Joe Biden, who is best known as Barack Obama’s vice-president but has been in US politics since the 1970s.
According to BBC polls, Joe Biden has been ahead of Donald Trump in most national polls since the start of the year and he has hovered around 50% in recent months and has had a 10-point lead on occasions.
Every one, therefore awaits the 3rd o November 2020, to know who would be declared the next president of the United States.

The Minister of Information, Lai Mohammed has called for the regulation of social media in Nigeria
The Minister of Information and Culture, Lai Mohammed, on Tuesday said that the nation is sitting on a keg of gun powder regarding the issue of fake news, hence the need for the government to immediately begin to regulate the social media space.
He said the biggest challenge facing the country is the issue of fake news and misinformation, warning that the next war that will be fought in the country and across the globe may be fought through social media.
He compared Nigeria to China where they went and could not access google, Facebook, Instagram and even emails because they made sure it is censored and well regulated.
The bill against social media in Nigeria has however been condemned by many Nigerians, celebrities, and human rights activists.