The Contractors Association of Niger Delta Development Commission (CA-NDDC) has endorsed the forensic auditing of the NDDC by the Interim Management Committee (IMC), ordered by President Muhammadu Buhari.

This is as a group, Transparency Advocacy for Development Initiative, has called on President Muhammadu Buhari to dissolve the board of Niger Delta Development Commission (NDDC) and also suspend the Minister of Niger Delta Affairs, Godswill Akpabio, over alleged corruption and mismanagement rocking the commission.

The association stated this in a communique issued after an extraordinary meeting of the president and the executive members in Port Harcourt, yesterday.

The association also called on all contractors to go back to site and to ensure that their jobs were of top standard, urging their president to liaise with their Grand Patron and forward a partial list of performing contractors with recognisable milestones for prioritised processing and possible payment, as soon as funds were made available to the Commission.

The association said it was able to arrive at this position after an accord was reached with the Ag. MD/CEO of the NDDC, Prof. K. Pondei, the NDDC IMC and the Commission’s top Management staff on a win-win situation.

The constructive dialogue, they said, was held during the week between the founding fathers of the defunct OMPADEC/NDDC and their president, Mr. Nwanyiri and other executive members at the new NDDC Headquarters, Eastern Bye-Pass, Port Harcourt It was generally agreed as follows:

The CA-NDDC, which described itself as one of the key implementing stakeholders in the realisation of the NDDC’s mission mandate, said it “has over the years helplessly watched the deterioration and undermining of the fate of her membership. Many contractors, especially the performing contractors have died out of thinking and penury. Some have gone insolvent and at worst, blacklisted by many banks they obtained loans from to execute NDDC contracts.

“Others have had their collaterals seized or even mortgaged or sold by banks, whereas many others died of heart break and others live in perpetual fear of either being harassed by banks or those they borrowed monies from to execute NDDC projects. “Efforts had been made severally in the past, both within the Presidency, the National Assembly, past NDDC Boards and Managements, to gain reprieve and succour for indigenous contractors, to no avail.”

In the communiqué, it was resolved “that the Association should henceforth be seen, recognised and encouraged as a working partner that can help to project aims and objectives of the Commission, especially in the areas of professional execution of works awarded and monitoring to ensure quality in the implementation of NDDC award project and helping the Commission protect implemented projects within the communities.

“That as partners in progress, the Contractors Association of NDDC should help promote the Commission and help the NDDC realise its mandate.

At the meeting, Chief Jumbo, National Chairman of the Founding Fathers of the defunct OMPADEC/NDDC, who is also the Grand Patron of the Contractors Association, said performing contractors should be paid without further delay.

He said the Founding Fathers resolved that the National Assembly should, as a matter of national priority and regional inclusiveness, prioritise and approve the lingering 2020 budget of the NDDC, so as to give NDDC Management enough room to implement the budget. This way there would not be budgetary overlap and gross developmental loss to the Region.

Chief Jumbo reiterated the now unacceptable fact that both the federal Government, the National Assembly and successive NDDC Boards and Management had neglected the Founding Fathers of those two commissions.

He said that as the Founding Fathers, they used their own personal resources without any government financial support, right from the days of Dr. Pius Okigbo, on through the tenure of Chief Olu Falae, on to the Presidential Advisory Committee, worked with President Ibrahim Babangida, the Armed Forces Ruling Council (AFRC), on to former President Olusegun Obasanjo, as well as the Senator Fred Brume and the National Assembly.

He said that their intellectual properties were at stake. The Founding Fathers said as of right, they did not want the NDDC they birthed, to be destroyed on the altar of selfish greed and political acrimony.

Also, the Founding Fathers commended President Buhari for the Forensic Audit, and said they were in full support of its completion.

In a statement by Executive Director of Transparency Advocacy for Development Initiative, Mr. Yomi David, said there was need to reposition the commission in order to ensure development in the Niger Delta region as well as lasting peace.

He insisted that there was need for federal government to reconstitute a proper NDDC Board as well as remove NDDC from the supervision of the Ministry of Niger Delta Affairs in order to ensure transparency and accountability.

David recalled that Akpabio at a recent public investigative hearing by the National Assembly alleged that some lawmakers were given or awarded contracts and projects to develop the Niger Delta areas by the NDDC.

He stated: “The Ministry of Niger Delta Affairs has been suffering immense neglect, and even the East-West road in the Niger Delta Region has been abandoned by the ministry.

“We therefore, call on the President Muhammadu Buhari to suspend the minister and the entire Interim Management Committee of NDDC for gross misconduct, mismanagement, fraud and corruption and to constitute a proper NDDC Board, as well as removing NDDC from the supervision of the Minister of Niger Delta Affairs.

“This is in order to reposition the commission to carry out the mandate of meaningful development of the Niger Delta Region and ensure a lasting peace in the region.” 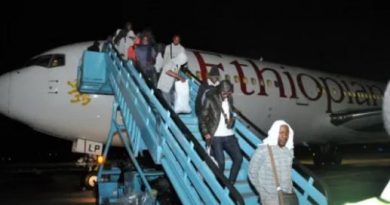 Countries That Nigerian Travellers Can Go From 5 September

Eviction Orders Here And There Will Make Us Refugees In Our Own Country, By Fredrick Nwabufo