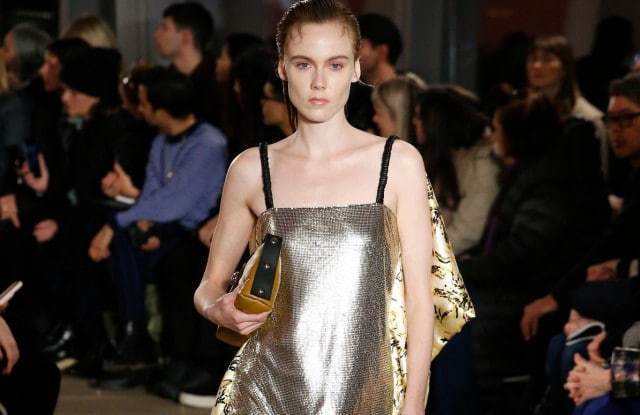 New York Fashion Week will be significantly more intimate this year, but the specifics about who will show, when and whether that will happen virtually or live remain a mystery.

On Tuesday, New York Gov. Andrew M. Cuomo gave the green light for the shows to go on from Sept. 13 to 17 — but with significant restrictions in terms of attendees and venues. His authorization was issued less than 24 hours after IMG, the owner and producer of NYFW: The Shows, had released those dates and an initial roster of participants.

Late Tuesday morning, a spokeswoman for Cuomo sent an unsolicited quote to WWD requesting that it be used to update the story about NYFW: The Shows. Two hours later, Cuomo’s office issued the press release about NYFW, which included the quote that had been sent to WWD earlier in the day.

The news bulletin from Cuomo’s office — to no surprise — is in keeping with current state COVID-19 guidelines. Under New York State health and safety guidelines, outdoor events will be capped at 50 persons and indoor events at 50 percent capacity with no spectators.

An IMG spokesman said that for open-air events with a capacity of 50 spectators, media and buyers would be invited as part of the spectator count. “For indoor events operating as media productions, press would be factored into the reduced capacity headcount for working professionals on-site to also include due talent, cast and crew,“ he said. “As always, designer p.r. teams will determine invitees and/or participants for their individual shows, presentations or content productions, managing against this season’s limited-capacity requirements with IMG’s support.”

Any fashion show event would also need to adhere to social distancing; ensure all personnel including models and guests comply with the state’s always-changing travel advisory; institute diagnostic testing and health-screening procedures, including temperature checks prior to admittance; limit the in-person workforce to only essential personnel on-site, and require face coverings at all times.

“New York City is the fashion capital of the world and New York Fashion Week celebrates the ingenuity of this city, and our unmatched creative talent,” Cuomo said in his statement. “When COVID-19 hit New York, so many of our cherished events were forced to cancel or be postponed. The pandemic is far from over, but we’re proud to support event organizer IMG in moving forward with NYFW, in adherence with strict state public health guidance. Safety, as always, is our top priority and we commend the hosts, and all participating designers, for their innovative, New York Smart solutions to bring this event to life.”

As reported, New York Fashion Week: The Shows will feature a mix of live and virtual fashion shows, presentations, and other programming this year. This new mandate from the governor may help some designers who have yet to decide whether they host physical or virtual shows this coming season.

“The CFDA commends Gov. Cuomo’s important work to manage the COVID-19 pandemic in New York City and state,” said CFDA chief executive officer Steven Kolb. “As the organizers of the official New York Fashion Week schedule, the CFDA has had extensive conversations with the fashion community. We found that most designers will be presenting their collections digitally, and are proud that they are choosing Runway360, CFDA’s innovative, centralized NYFW hub, to do so. We look forward to releasing the official NYFW schedule…later this week. We are pleased that IMG’s show venue at Spring Studios is working in compliance with current health and safety regulations as regulated by the governor’s office.”

IMG said it is working closely with New York State officials to ensure compliance with all health and safety requirements and has agreed that there will be no spectators for indoor events; and a limited number of private events held outdoors on the Spring Place rooftop will adhere to reduced capacity guidelines of no more than 50 people.

After Tuesday’s initial WWD report about the IMG-approved roster, a Proenza Schouler spokeswoman described the company’s representation in the article as “misleading” and asked if IMG had shared the information. She clarified that the designers would not be showing during NYFW and will reveal its collection off-calendar in a more creative way. Proenza Schouler’s Jack McCollough and Lazaro Hernandez are still working out the theme of a panel talk they will be part of during NYFW: The Shows. Later in the day, the spokeswoman noted in an e-mail that Proenza Schouler has always valued its participation in NYFW and is looking forward to working with IMG in some capacity.

IMG’s roster included Victor Glemaud. After Tuesday’s initial story, a spokeswoman for Glemaud said that he was “never part of the NYFW lineup and the information stating otherwise is incorrect.”

After much back and forth Tuesday, the IMG spokesman late Tuesday afternoon said that Proenza Schouler and Glemaud will be involved with NYFW: The Shows “in some capacity, but were never going to show.”

Like Michael Kors and Jason Wu’s signature collection, Proenza Schouler is planning for an October reveal, which is when the creative concept highlighting its new designs will debut.

Erin Hawker, head of Agentry PR, which organizes New York Men’s Day, said the shows she organizes will be virtual this year and will be part of the official NYFW calendar. “For NYMD, since we are a collective of 10 to 12 emerging designers each season, we had to listen to the comfort level of the majority of the showing designers. Overwhelmingly, the designers decided showing virtually, across look book and video combinations, matched their comfort and health levels. We are looking to confirm our set date within the next day, but will be showing on the Runway360 platform.”