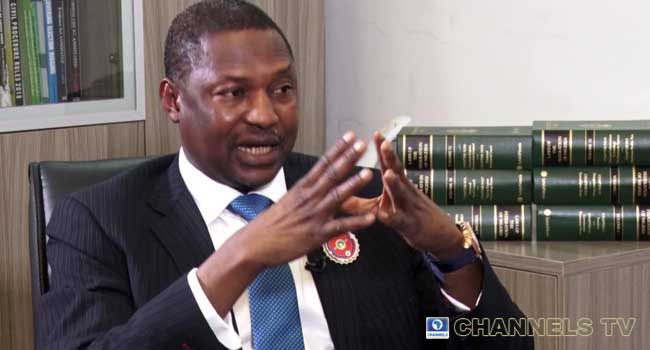 Crime
June 29, 2020June 30, 2020 Mary 0 Comments
LinkedInFacebookTweetPin
LiveChat will greatly increase the number of your satisfied customers. I've already tried it and I can recommend it as a go-to customer service tool! Sign up today for a free trial!

The Office of the Attorney-General of the Federation and Minister of Justice only pays whistle-blowers after successful recovery not for mere tracing or exposure of suspected illegitimate funds.

This is contained in a statement issued by Dr. Umar Jibrilu Gwandu, Special Assistant on Media and Public Relations Office of the Attorney-General of the Federation and Minister of Justice which was made available to newsmen in Abuja on Sunday 28th of June, 2020.

The Minister was reacting to a story published by the The Punch newspaper on a pretext of a letter allegedly by one Aliyu Lemu, Esq. purportedly written on June 22nd, 2020 on issues revolving around payment of a whistle-blower’s fees.

According to The Punch, a whistleblower, John Okpurhe, has accused Malami of  of refusing to pay him reward after exposing over $1billion government money hidden in Unity Bank Plc.

The was the reason why Okupurhe,  reported Mr. Malami to President Muhammadu Buhari, via a letterby  lawyer, Aliyu Lemu, dated June 22, 2020,  the report said.

However, Gwandu said in a reaction to the story that “The Office of the Attorney-General of the Federation and Minister of Justice wants to make it categorically clear that one does not get  payment on account of exposing looted assets, but on successful recovery and lodgment of same into the designated assets  recovery account at the Central Bank of Nigeria.

The statement listed the procedure for engagement of a whistle blower or recovery agent as it relates to the Office of the Attorney-General of the Federation is as follows:

“1.  A Proposal is submitted to the Office of the Attorney-General of the Federation

“2. A Letter of engagement is issued to a whistle-blower of recovery agent where the disclosure is assed to have some prospects of

“3.  The recovery agent or whistle-blower is expected to notify in writing the acceptance of the engagement,

“4. The recovery agent or whistle blower is expected, upon acceptance, to not only trace the assets but recover same and have it deposited in a designated asset recovery account maintained by the Federal Government of Nigeria in the Central Bank which is usually provided to the recovery agent in writing.,

“5.Where these funds are eventually claimed to have been lodged by a whistle-blower or recovery agent, the Central Bank issue acknowledgement of receipt of the fund to the Office of Attorney-General on demand,

Gwandu said , “It is the satisfaction of the above elements that entitles the whistle-blower or a recovery agent to a claim of success fee and the payment is usually effected by the Federal Ministry of Finance and not the Office of the Attorney-General of the Federation.  The role of the Office of the Attorney-General in essence is simply that of processing the above listed documents to the Ministry of Finance which is the

Ministry saddled with the responsibility of effecting payment,

Malami explained further through his media aide  that “recovery is not about exposing the existence of certain assets in an account purported to have belonged to an agency of the government. it is about establishing that the funds in the account are looted assets or illegitimately warehoused and following that up with actual recovery and lodgment of the funds in the designated Asset recovery account through judicial and extra judicial means.

“Entitlement to recovery fees is for all intent and purposes contingent on lodgment of the purported/exposed assets constituting the subject of recovery into the Federal Government Recovery designated Account maintained at the instance of the President at the Central Bank of Nigeria and the details of the account are contained in the engagement letter.

He said, a clause in the letter reads: “The agreed remuneration shall become due and payable to the whistle-blower within thirty (30) days of the receipt of the recovered/looted funds by the Federal Government of Nigeria and payment shall be made the designated/nominated account provided in writing by the whistle-blower”.

Malami further said, as a way of encouragement, that  if the whistle blower in the circumstances of this case feels strongly that there is any claim of wrong doing associated with the alleged claim relating to recovery process, the whistle-blower should consider lodging a  complaint with the relevant institutions of his choice for the matter to be properly investigated and or consider a judicial redress in the alternative.

“The claim by the whistle-blower, as published by the paper, that the Office of the Attorney-General of the Federal cajoled them into signing of an agreement forfeiting sixty percent of the whistle-blower fees amounts to criminal allegation which the whistle-blower is encouraged to lodge complaint before the appropriate law enforcement agencies for full-scale investigation,” Gwandu said.

He concluded that, “The Attorney General shall, however, in line with established tradition of subjecting matters attacking his reputation submit the whistle-blowers mischievous allegation to judicial determination as done previously with The Cable when its maliciously publish a story casting aspersion against the Attorney-General on matters relating to the Abacha loot”